"Mandela" a Tamil satire with apt references for the U.S. Senate 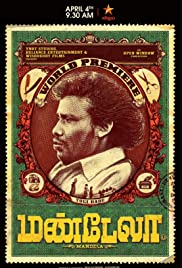 Satires make all sorts of points  If you are not familiar with Tamils you may have heard of the Tamil Tigers, the originators of suicide bombers.  But this is not them, these ones are in a small rural village in India (not Sri Lanka).  They have a long history of film making that includes political satire.  Netflix recently offered this film for streaming.

A homely man, pictured to the left, of a lower caste is early shown no respect.  His caste allows him few opportunities and he is the village barber.  The film starts off with some scattological humor that illustrates how humiliating a low caste person is treated.  In India public toilets were an election promise to dramatically improve economics, feminism and of course health.

While talking to a female postal employee we learn he has no legal name, just insulting nicknames.  The clerk after trying several names is inspired by a postage stamp and suggests the name Nelson Mandela.  He has never heard of him, but sees a photo that faintly resembles him while the clerk flatters that the two men are both nice and searching for an identity.

An old respected man who has tried to keep two rival factions (here designated north and south) from hurting one another.  Although well respected by both sides they want him to make decisions in favor of one or the other faction.  An early example was that the old man  built the first public toilet--only one, because he thought they needed to learn how to share.  The somewhat hot headed factions decide that they need to elect a leader.  The old man agrees, recognizing he is aging.  Reality is stretched so that after a lot of effort they each calculate that the votes are exactly tied.  After getting his name changed Mandela was sent a voting certificate in public and each side realized he had the critical vote.

The election was called for 4 weeks later and each faction canvassed the voters including on death beds and overseas, but  still could not break the deadlock.  We use polls to determine who is most likely to win, but always qualify the results.  Each side through threats and bribes could force their side to toe the line.  Reminds one of some political parties.  Anyone think of Trump?

Mandela now realizes he has more leverage than ever in his poor life.  At one point even offers his vote in an auction.  This escalates until a younger friend he is fond of, has a life threatening injury and he evaluates his behavior.  The postal clerk who liked him, was disgusted that with the name she gave him, he was behaving atrociously.  He then cleverly got a new school built, roads paved and the one public toilet restored as his price.

The ending was ambiguous but symbolical.  We know Mandela voted, but we don't know for who (we really don't care).  Tension mounts as he refuses to reveal who he voted for and one of the factions (the one that thinks they  lost) is planning to kill Mandela as revenge.  He is with the postal woman who has forgiven him and sending her away for her safety.  While he awaits the elder leader asks him for a shave.  Then people from both sides ask him to perform various barber tasks until virtually the whole village is lined up and the assassins give up.  We are never told who won, but the narrator lets us view the town side as the film fades.

The U.S. Senate is a unique situation.  The Vice President (currently Kamala Harris) presides, but can only vote to break a tie.  As it happens the Democrats and Republicans each claim 50 voters.  A Republican, maybe Mitt Romney or Susan Collins could side with the Democrats to help pass legislation, but Mitch McConnell has a tight grip with committee appointments and primary support.  The Democrats have a few members in tightly contested states and have been known to vote with Republicans.  It would only take just one defector to defeat Democrat legislation.  Joe Manchin, basically a Democrat, but has voted for Republican measures that he feels his West Virginia constituency would prefer.  He now has the ability to modify legislation towards what he feels is in his best interest.

The movie exaggerates human nature at its worst.  As an individual we have little power, but those who do have power make the rules and bend them to their benefit.  The two factions could be any two groups that differ in any regard:  Israelis and Palestinians, Democrats and Republicans, a high caste and a lower caste, etc.  Whichever group has the power can easily rationalize why they not only deserve it, but are entitled to do whatever is required to maintain it.

The producer, S. Sashikanth started as an architect and became involved with major projects.  Later he became interested in films and bucked Bollywood traditions that made producers more in charge of financing movies.  He preferred to pitch creative ideas and began producing Tamil language films in 2010.  "Mandela" certainly is creative, making political points in comic fashion.

Madonne Ashwin, the director writer appears to have moved up with this film as he had written only one feature before and had directed short films.  He has created a masterpiece and one expects great things in the future.

Bararath Sankar wrote the music.  He got his start in music departments with "Nila" (2016).   Has written lyrics, been a playback singer (including this film) and a mixing engineer.  He wrote the music for "Dharala Prabhu" (2020) that I bought one of his songs thru iTunes. Dharala Prabhu was a remake of "Vicky Donor"  http://www.therealjohndavidson.com/2020/04/vicky-donor-cf-dharala-prabhu.html

Yogi Babu played Mandela from a very humble man to an arrogant one. and back.  He started in a major role in a Tamil tv series running three years in 2004.  He has appeared in numerous films including "Chennai Express" (2013) and "Mersal" (2017).

Sheela Rajkumar plays the postal worker who took a liking to Mandela after she picked his name.  She has been in Tamil films since 2017 including a long running tv. series.  Also appeared in "Kumbalangi Nights" (2019), a Malayalam film.

Sangili Murugan played the elder authority that tried to bring democracy to a small village.  He has been in films since 1981.

"Mandela" was a simple story about political corruption that is universal.  A small, seemingly backward Tamil village displays the same characteristic that are duplicated on the big screen U.S. senate only with more money.

As usual I have bolded the movie titles I have seen.

About the original Nelson Mandela, http://www.therealjohndavidson.com/2013/12/nelson-mandela.html