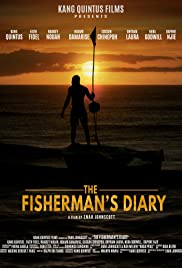 I don't blog every movie I watch, but lately it seems that several seen in a short time are worthy of more attention.  This one is worthy because of its message.  It is of interest because it shows a developing cinema power that boosts options for all of us.   Available on Netflix.

Education is the message.  For girls in many third world countries it is very difficult.  This film is set in a poor African (Cameroon) village.  There is a small private school financed by a moderately wealthy man with some connections.  The father of Ecka loves his daughter, but is dead against education for girls as are most of the fishermen in their community.

Ecka, even at 12 years is very good at organizing the women wanting to buy fish.  She wants to be educated and since her father won't pay for it or even allow it she sneaks to the school house that has holes through the log wall where she can follow the teacher.  Eventually the teacher realizes she is a quicker learner than her paying students.  She tries to help and brings up the memories of Malala who had been shot in her face because of her effort to get educated.  This is brought up another time and at the end in a more triumphant manner.

The teacher is reprimanded for her efforts and then threatened with violence.  Ecka is beaten and hunted down.  Her father's brother suggests to marry her off, although she is only 12 years old.  She is forcibly married to a friend of her uncle and forcibly raped.  She pleads with her father who tells she must go back to her husband.  Her father learns that his brother arranged the marriage to pay off a heavy debt. and is very upset.  Ecka makes another attempt to escape.  The next time we see her she has been entered in a television contest and wins.  There is an appearance years later at a graduation ceremony.    -

Cameroon has two official languages English and French, but well over 200 tribal languages.  In the film you hear English from educated roles and pidgin English whenever uneducated characters are in the conversation.  Most of the dialogue is subtitled, but much of the meaning is easily understood.  I remember being surprised to learn that basketball players Pascal Siakam and Joel Embiid conversing in French.

There is not yet a long history of Cameroon cinema and much of their expertise is borrowed from elsewhere, but they are building up their resources.

Enah Johnscott the director and writer was born in Wum, Cameroon.  In an interview he explained that where he grew up school costs a small, but difficult to get fee each day.  He had to "hawk' goods to get the daily charge for school. He made it to university and got interested in acting through watching fellow students rehearsing.  He felt their scripts were not very good and set out to write a better one.  He attracted attention and was asked to direct a play.  From there he learned on the inter net and YouTube some of the basics of directing.

Kang Quintus was also born in Wum, Cameron and reached university education in Europe focusing on economics.  He drifted into acting and became very interested in film.  He wrote, acted and produced "Rejected,"(2015) which was filmed in Maryland, and Washington, D.C.  He claims fund raising was the biggest challenge.  Also edited film, demonstrating he has learned a lot, but declares will enter the New York Film School while he finishes up a Ph.D in accounting.

Rene Etta handled the cinematography  Apparently the script worked best in the rainy season where there was more fishing, but when it rained they had to take expensive delays.  It is well done.  He did two short films, one in South Africa and the other a French language film in Cameroon.

Music was provided by Ewube who is also a backup singer. for some of the songs.  The soundtrack was nominated for an award.

Faith Fidel plays the 12 year old girl who is very savvy, but gets beaten a number of times and once raped on camera.  Been in Cameron films since age 5.

Damarise Ndamo played the teacher who did what she could to help Ecka.  She has appeared in two television series.

Ramsey Nouah played the headmaster who was aware of local resistance, but wanted to sneak Ecka into a national contest that would enhance his position.  He has been in over 100 Nollywood  films including some filmed in South Africa and the United States.

The film does not seem amateurish, in fact seems worthy of awards.  Engaging from the beginning.

Read about Nollywood that contributed expertise for this film:  http://www.therealjohndavidson.com/2020/07/nollywood-upcoming-force-in-global-films.html

I met her Malala's father who gave a presentation at my local library and had a few words.  You can read about that:  http://www.therealjohndavidson.com/2019/06/let-her-fly.html