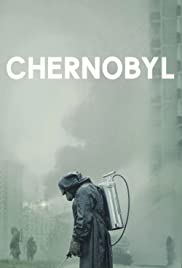 It is hard to comprehend the horror of what happened at Chernobyl in Ukraine.  At the time it was part of the Soviet Union and it appears there was a great deal of ignorance about the threat to human life.  People in power thought they understood and were resistant to scientific opinions.   Fortunately some courageous knowledgeable people persisted and helped to ameliorate the damage or the rest of the world would have been more greatly affected.  The root cause of the disaster was lies and the film makes it clear that lies were found at all levels.

My daughter suggested I might be interested in this.  A mind opening choice.  Like everyone else at the time I was aware of it and periodically would read about increases in cancer in areas nearby.  This series first appeared on HBO, but I saw it from a DVD from my local library.

The Soviet Union wanted to keep information from reaching beyond their borders, but radiation was detected in Germany and Sweden and traced to Chernobyl.  The Soviet authorities then realized it was better to open up, but tried to control the flow of information. Some people willingly risked and sacrificed their lives for survival of the rest.

The action ends with a show trial.  The writer took liberties to highlight the role of the lies that led to the disaster.  The Soviet prosecutors wanted it to boil to a manufacturer's error but some of the truth came out when the main character emphasized the role of lies at all levels.  With the credits, facts about individuals as well as statistics about the effects are displayed.

Craig Mazin, executive producer  created the series idea and script.  He has written scripts for "The Hangover, Part II" (2011) and "Identify Theft" (2013).  For a time he was a college room mate of Ted Cruz, but markedly differs in his views.

Johan Renck, the director/producer got his start in his native Sweden.  Music was a big part of career and has worked with Madonna.  He has directed episodes for "Breaking Bad" (2009-2011)  and "Walking Dead" (2010).

Hildur Guonadottir, the composer and Oscar winner for Joker has done many films including "Tom of Finland" (2017) " and  "A Hijacking" (2012).  For this film Hildur traveled to Lithuania and the site used in the movie to listen to the sounds made by the decommissioned power plant used in the movie.  The music was composed after listening to the heard sounds.

Jared Harris plays a nuclear physicist who early recognizes that the Chernobyl explosion is more significant that authorities recognizes.  Throughout he is at loggerheads with authorities, but gradually winning them over as he in turn recognizes he has to be diplomatic to have an impact. The son of Richard Harris, he showed little interest in theatre until attending Duke University.  He acted with the Royal Shakespeare Company and later performed with the New York Shakespeare Festival. He won an Obie Award with an off Broadway play.  His films include, "The Last of the Mohicans" (1992), "The Curious Case of Benjamin Button" (2008). and "Lincoln" (2012).   Some of his favored roles were with the tv. series  "Mad Men" (2007) and "The Crown" (2016).  He received several awards for his role in "Chernobyl" including a BAFTA for leading actor.

Stellan Skarsgard played a high ranking Soviet security officer who at first wanted to do everything as directed by Communist bureaucratic dictates, but later realized the scientist's had the truth.  Some of his films include "The Hunt for Red October" (1990), "Good Evening, Mr. Wallenberg" (1990), "Insomnia" (1997), "Amistad" (1997), "Mamma Mia" (2008), "The Girl with the Dragon Tattoo" (2011), "Mamma Mia Here we Go Again" (2018).  Born in Sweden, he performed on stage and as a teen starred in a tv series.  He sang in "Mama Mia" which was used songs from the popular Swedish group ABBA.  He also starred in a British tv series, "River" (2015).

Emily Watson played a nuclear scientists( really an amalgamation of several scientists) stationed in nearby Belarus, then part of the Soviet Union.  She was able to influence some of the cleanup efforts and was pressing for the truth to come out.  She got an Oscar nomination as leading lady on her debut film.

Jessie Buckley played the pregnant wife of one of the fire fighters who lost his life after radiation exposure while she received dangerous radiation while visiting him.   Irish, singer,  She sung in many musicals in England.   She has acted in many films including "Judy" (2019) and the television series, "Fargo" (2020).

Geography does matter and so while watching I checked out Belarus and its capital Minsk where some of the radiation reached.  These are places that matter, but which most have a distorted awareness of.

In the end it turned out to be a series of human errors that seemed impossible.  Although many corrections have been instituted, one must be concerned about humans.  There are business interests associated with nuclear power and like any institution there is a layered bureaucracy.  There are terrorists trying to figure out how to get their hands on bombs and some of whom see nuclear power plants as targets in themselves.  You will not easily forget the suffering images shown in the movie.

Note:  I have bolded titles that I have viewed.