The Body Remembers when the world broke Open 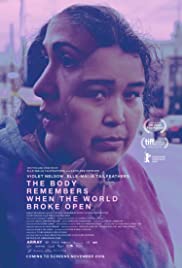 APTN, the television network offerss movies that have some sort of indigenous connection.  Most of the movies have low budgets and one feels the network feels an obligation to present the indigenous perspective.  The title  "The Body Remembers When the World Broke Open" (20190 comes from a an essay by Cree poet, Billy-Ray Belcourt.

It is a story about someone trying to help someone in need and being resisted.  Aila is herself indigenous with one parent Blackfoot and the other Sami (Norwegian) but she looks educated and middle class.  A pregnant, poorly clothed indigenous woman, Rosie was crying, barefoot and Aila hustles her new acquaintance away from the abusive boyfriend and to her home.  Rosie is  unhappy, but also fearful of change, revenge and public disapproval.  From this point Aila tries to persuade Rosie to seek help, but Rosie acts resentful.  Aila, after several phone calls finds a shelter that has an opening and shames Rosie to visit with her.  After a lot of guidance and a tour of the shelter, Rosie decides to go back home.  That is basically the story realistically presented.

About fifty years ago I was a young, naive social worker and found myself being advised to help a woman who felt abused, but reluctant to take action.  I had a run in with her husband who was very drunk,  aggressive and threatening.  I was rescued by a police officer I had met on the job.  The next day the husband who had been put in jail, came and apologized to me.  I wasn't on the job long enough to know how it worked out.

The writer, director and actor Elle-Maija Tailfeathers played Aila identifying her actual racial background.  Aila is a well meaning do gooder, but finds Rosie difficult to motivate.  Elle-Maija graduated from the Vancouver Film School and University of British Columbia majoring in First Nations Studies.  This movie is based on a personal experience.  She has done well as actress, director, writer and producer winning awards in all these disciplines.  Has even done some editing and camera work.  Awhile back I saw a movie done by Chloe Zhao on APTN that led her to bigger projects.  "Songs My Brother Taught Me." (2015) .Elle-Maija seems another candidate.

Kathleen Hepburn  writer, director has partnered with Elle-Maija and shared in many of the same awards.  She has also done editing and camera work.

Lori Lozinski, producer known for socially conscious films with strong female characters.  Alberta born and now based in Vancouver has won awards.  She has been producing since 2004.

Tyler Hagan, producer has partnered with Ell-Maija, Kathleen  and Lori on several films.

Norm Li was the cinematographer who has been involved with camera work since 2005.   Filmed in Vancouver, British Columbia,

The editor, Chrisian Sibenherz is Norwegian and has edited films since 2006 including "The Wave" (2015.)

Violet Nelson in her first film played Rosie, the pregnant abused woman   Her role was to  be distrustful and fearful of authority figures.

Barbara Eve Harris played a shelter person who tried to reassure Rosie and in the end recognized it would take more than one encounter.  Born to Jamaican parents,  raised in Ottawa she has appeared in many tv. shows and movies (both sides of the border and beyond) including "People Like Us" (2012), "How to Get Away With Murder" (2015).

Since I was a student, I have been interested in indigenous people, but mostly ignorant.  I have read and watched lots of presentations and feel that APTN offers something not only for the indigenous, but also for the rest of us who have only a superficial understanding.

The bolded film titles are ones that hae been seen.

Another film seen through APTN:  http://www.therealjohndavidson.com/2020/07/tia-and-piujuq.html