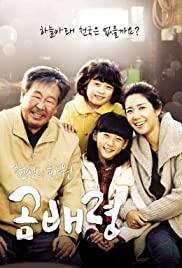 Korean tv series have become very addictive with me. "Heaven's Garden"  was slightly different in that it was released in 2011, meaning it is not quite as slick as more recent series.  Still this one proved to be not only very enjoyable, but mind opening.

Like all the others seen it has a very complicated plot with many minor characters developed over the course of 30 episodes.  Although many are not likable at first they gradually become more understandable and even likeable towards the end.

The basic plot starts with an estranged father and daughter with a step daughter thrown in.  As the series progresses we can add in a husband and ex wife.  Neighbors with their own relations are added in.  A theme picked up early is children not living with their birth mother.  In the first instance the estranged daughter, distraught with marital concerns finds her father upset that she would bring a step daughter.  She is made to feel unwanted, but in the end she is the key to the whole series.  She loves her step mother who cannot imagine living without her.  She would be about 13 at the beginning and comes right out and asks what she has to do for acceptance.  The first character transformation is with her grandfather who in facts does accept her and we learn he is a very strong character who is conscious of mistakes made earlier in his life.

There are loads of complications and misunderstandings.  And it should be mentioned loads of transformations.  At the end there are still a few loose ends, but that just reflects reality.  Most of the characters are better off.

What makes it meaningful for me is what might be a tree analogy somewhat explained by the grandfather to his step-granddaughter.  He is a farmer who seems to have a good understanding how things grow.  When asked about why one tree looks a little different he explains about grafting a branch from one tree to another creates something better.  Over a number of episodes the mother and her step daughter become comfortable with the concept that she is really "special."  We encounter some other special children with their parents and appreciate that they (both parent and step child) are better off.

The writer used an interesting tool to finish the series.  The one step daughter has been asked to do a last will as a school project.  Most of the other students procrastinate, but Eun-soon thinks it would be "fun."  She puts it that she likes to think about what she would leave behind.  She explains to her grandfather that she wants to be a teacher and specialize in "special' children, but also including their parents (birth and otherwise).  Her vision is that they would all live together and learn from each other.  She wanted to leave behind her a school for all of them.  A day or so later her grandfather offers to the whole family with his own will that includes organ donations, but is highlighted with his idea of a special scholarship to make Eun-soo's school possible.  The series ends with many of the characters writing about what they want to leave behind.  Knowing the characters, some of the messages are stirring.

Obviously films like this do not just happen.  Although it is not as slick as more recent series, the script, direction, acting and the many actions of the full crew blended to make it very memorable.

The script writer is the most critical key.  Not able to learn much about Eun-nim Ko, except she is female and she has been active at least within the past two years.  The plot contains lots of complications that viewers love, but it has an underlying theme that sneak up over many episodes.

The director Jong-han Lee is only credited with one other film which was earlier.  No listings for producers, music, cinematography or any other crew functions.  Many details fall into place for the overall strong impression.  One aspect that impressed me was the landscape which was rural over the whole year with interludes with natural scenes involving birds and running water.

The key roles were very well done and conveyed the difficult range of emotions.

Ho-jeong Yu plays Jae-in, the estranged daughter which is really who we follow and she is very likeable.  Will she win over her father, will she get back with her somewhat shady husband loved by her two children or with her confidence shattered accept the advances of a very likeable man, will she be able to reconcile other relationships.  She is excellent and apparently has an active career.

Bool-am Choi plays the estranged father/grandfather.  We do not like him right away, but soon he melts a little and over time we learn a little of history which does include awareness of many mistakes.  He is also accepting of other people who have made mistakes.  His relationship with his step grand daughter and his daughter is enjoyable to watch.  His career goes back to 1968 and extended a bit beyond this film.

Sae-ron Kim plays the step daughter and appears mostly always cheery, although she also conveys someone with deeper thoughts.  The year before this series she had a role in "The Man From Nowhere" (2010).  She has gone onto more films and has won a few awards.

Seo-hyun Ahn plays the natural daughter of Jae-in and at times appears very spoiled and also jealous.  She had appeared in "The Housemaid" (2010) and reached a much bigger role with "Okja" (2017) an American/Korean project directed and co-written by Bong Joon Ho.

The many supporting characters were very well done.  A few seemed stiff, but as the series progressed a change was evident that reflected acting skills.

It is my hope that more people will catch it on Netflix or some other source.  It's message deserves a wider audience.

The one that really got me started:  http://www.therealjohndavidson.com/2020/02/crash-landing-on-you-very-addicting.html