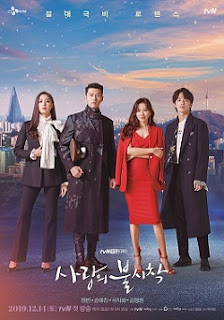 A confession to start.  I like movies with a little romance and by chance stumbled on "Crash Landing on You.'  It has a lot of romance and is very manipulative.  The secret to many romances is that there is some sort of barrier between would be lovers and this one must win the prize.

On one side is a South Korean daughter of a very wealthy man who has developed her own successful company and is very independent.  On the other side is the son of a politically important man in North Korea in the military.  In between is a border that is perhaps the most guarded in the world.  Very flukey circumstances bring them together.  No matter what they do someone is bound to suffer and that is made abundantly clear as the plot develops.  Most of the politics is like bureaucratic office style with different individuals and groups vying for power.  Family squabbles and corporate struggles on both sides of the border.  Although the North Koreans seem human there are lots of details that shows South Korea to be superior in terms of technology and openness.  North Koreans are resourceful.

The Korean tv series has more going for it than romance such as intrigue, action, humour and cultural insights.  It is likely non Koreans will not get all the nuances, but nonetheless you will discover many unique cultural features, but at the same time also appreciate that human nature is universal.  This film is the second highest rated Korean drama in cable television history.  It is definitely one of my favorites for the year.

The plot is very implausible, but you can't help getting drawn in.  The beginning reminds me of "The Wizard of Oz" where Dorothy is lifted out of Kansas by a tornado.  In this film the heroine decides to paraglide as a promotional stunt for her company and a wind takes her over the border.  There are a number of coincidences that play a role including that three main characters unknowingly interact in Switzerland.  The connections across borders is also a bit suspect.  But to me all the writer is doing is setting a hypothetical set of circumstances and suggesting how actual people might react-- like many other enjoyable stories.

Some people might be annoyed by the frequent use of flashbacks.  It is done well, revealing bit by bit so you understand what brought you to a particular point.  Like many good films it can be confusing and simple at the same time, but as it progresses the plot becomes more complex as in real life we are all connected in ways we don't recognize.

Researching cast and crew is not as rewarding as for American, European or even Bollywood films, but I know I will be watching more Korean productions and want to record the names and some of their achievements.

Jung Hye Lee directed all episodes.  Ji Eun Park wrote the script having got her start writing for tv talk and variety shows and sitcoms.  The producer is a German actress, Claudia Magira and it is obvious a lot of money was well spent on this production

Music handled by Nam Hye-Seung.  Music includes some classical and pop tunes, some in English.

Roger Neuburger handled production issues in Switzerland.  He had worked on "Phantom Thread" (2017).

Will discuss the four main leads from their photos at the top from left to right.

Ye-jin Son plays the heroine and it is hard not to like her and appreciate the range of emotions she undergoes.  She has a long history of serials and winning awards.  Ye-jin, prefers a natural look and especially does not want to look made up when waking up in a scene.  She is not the most glamorous actress in the film, but definitely the most likable.  She is also a certified pilates instructor.

Hyun Bin plays the stoical hero who is a very skilled fighter, but also a pianist.  He is considered very good looking and attracts a lot of attention.  Also been in many series and won lots of awards.

Ji-hye Seo plays the rejected fiancee that later falls for a bad guy and converts him a little.  She is probably the best looking of the women in the movie.

Jung-hyun Seo played a good looking con man who in the end did the right thing.

There is a big cast as the story required to provide humor and intrigue.

There are a few similarities to Bollywood.  There are songs and background music that play an important role in setting the mood.  A few decades ago Bollywood had movies set in Switzerland. to make their characters more exotic or sophisticated.  Koreans like to travel and it turns out scenic Switzerland is only one destination used in movies.

A few years ago I had seen enough Korean films to write a blog.   http://www.therealjohndavidson.com/2014/04/a-slice-of-korean-cinema.html

Since then I have watched a number of enjoyable Korean films some of which are remembered in my year end movie reviews.  Some were outstanding enough to warrant their own post.  Now I am expanding my interest to Korean television series and am currently watching another romance, but quite different with leading lady Ye-jin Son.
Posted by John F Davidson at 9:45 AM