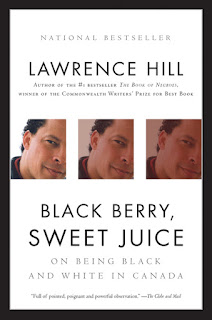 This is my fourth book by Lawrence Hill and the first non fiction.  I had read  "The Book of Negroes" before I actually met him.  It was in a library setting giving me a chance to ask questions and have him catch me out on a prejudice of mine (regarding a specific subset of blacks).   I remember learning some of what he had planned for the near future and some of his writing background.

I had read many books about the black experience and was aware of mixed races, but not thought about it.  As Hill explains each person has an identity concern.  I grew up white, not conscious even of white privilege as there were no blacks to compare myself to.  As I grew up I encountered more blacks and other races including mixed.  It was easy to be self righteous about prejudiced people, especially when they were distant and not real.

Lawrence grew up with a white mother and a black father who had moved to Toronto and lived in a white neighborhood .  His father's family, even though mostly in the States had kept up relations, but his mother's family had mostly disowned her and after awhile there were visits, but they lived further away.  Because he lived in a white neighbouhood and attended white schools he naturally developed "white" interests  One of them was squash which upset a cousin who described  it as a "white sport" but Lawrence really enjoyed it.

An element that escapes most people is that it is difficult for a mixed race person to be fully accepted by either race.  Barrack Obama labored under the fact that many whites would never accept a black president and that many blacks felt he was not black enough.  Part of his problem was that his father was born in Africa and had no history of slavery.  Interviewing dozens of mixed race people  Lawrence found that in many situations (following a one drop rule) they were discriminated against by some whites while seeming like outsiders among blacks.

Lawrence's father was a prominent human rights government officer and was able to provide lots of opportunities.  Lawrence has lived in many Canadian cities, partly to learn French.  From Quebec he got involved with a student group in Niger where he met Africans some of whom were surprised he considered himself black.

Hair was an issue almost as serious as skin colour.   Long straight hair was considered a mark of beauty and many blacks tried to adapt with often frustrating results.  When I made it to university one of my  proctors (residential room supervisor) often talked of black pride and I believe hair was part of the movement.  Don't try to be something you are not, but take pride in who you are.  White mothers of black daughters are sometimes criticized for lack of mothering skill regarding hair care.  After reading the chapter on hair I was able to pick up "Embracing Da Kink" DVD from the library to get a better idea of how important hair was to personal identity.

Black men dating and marrying white women cause resentment and at one time fear.   Black men  have been taught to think white women were more beautiful.   Realizing this fact some black mothers encouraged their sons to ask black girls to dance reminding me of mothers of tall boys have been known to advise their sons to date taller women as they lose out to male prejudices against taller women.  In some circles mulatto women were favored as mistresses of prominent white men.

Many black women are better educated and have better career paths than black men meaning that such  women are competing for the more desirable men.  At the same time they often find the men are pursuing white women.  The author really didn't know any suitable black women to date when in high school, but when reached university still date almost exclusively white women.

The N word  When I was in high school my Latin teacher took a popular verse and rendered it in Latin.  Like many I was familiar with the "eeni meeni maini mo"  little ditty often used to decide between two options.   The n word used, "nigrum"wasn't as offensive as the more common version, but it helped perpetuate the slurring.  I think my teacher who otherwise seemed a fair minded person was just trying to get our attention for what was a declining academic choice.  "Huckleberry Finn" was a book that impressed me and in some ways didn't notice the n word as any more than an old, quaint way of talking that indicated lesser educated people.  Mark Twain portrayed blacks as humans.

There were virtually no blacks in my world in my first two decades, but I was very conscious of derogatory words, many of which I learned from the subjects of these terms.  They are all meant to downgrade the "other."  The n word  has probably more impact than any other term.  Another term  "wop' had an impact on my life.  I once used it sitting between my half Italian wife and an Italian co-worker against another Italian who in my opinion put down somebody who didn't deserve it.  I ended up apologizing for it but my wife and co worker thought it was merited.  I realize that it offended my boss, a man I greatly admire.

One chapter was devoted to an event in Oakville, Ontario in the 1930's regarding a marriage between a black man and a white woman.  Eventually they were able to get married, but not until after a Ku Klux Klan contingent from Hamilton intervened.  My embarrassment is that I once worked for the main Oakville paper, known as the Journal Record and although not identified as such undoubtedly was involved in supporting the efforts against the marriage.  We have all been guilty of associating with questionable entities.

Race is a nebulous term.  Blood types are found globally as are most body parts.  Of those born mixed race, many find themselves identifying with the minority race.  Lawrence found some examples of people who self-identified as black, even though they had a white parent as well.  A famous example is Barrack Obama.  Lawrence also self identifies as a black, but clearly his mother was an important part of his life.
Posted by John F Davidson at 10:53 AM