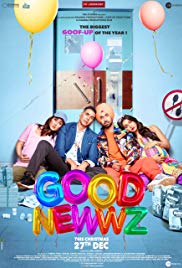 "Good Newwz" is a funny movie, hard not to laugh through most of it.   Second highest Bollywood gross in the U.S. for 2019.  But it has deeper repercussions.

The premise is two families named Batra are motivated to try invitro fertilization, but the sperm of the two men are injected into the other man's wife.  One couple (Akshay and Kareena) are quite upset and frown upon the other couple (Diljit and Kiara) as being offensively uncouth.  After accepting their situation they (Akshay and Kareena) are reluctant to have any type of contact with the others but it breaks down and at the end they are all involved with each other.

Reminds me of three other films that dealt with similar themes:

"Born in Absurdistan" (1999) an Austrian film where the sons of  Austrian and Turkish couples get mixed up and is not discovered until after the Turkish family has been deported.  The Austrian couple track down the Turkish family.  At first there is distrust with the Austrians looking down on the Turks,  but the Turks are very suspicious.  Plans are made to check blood back in Austria which would require smuggling deportees back.  As I recall several years later in the end the couples reconcile and decide to join together and raise both sons.

"Like Father like Son," (2013) directed and written by Hirokazu Koreeda presents a similar dilemma (of switched babies), except all participants are Japanese and the two boys are 6 years old.  One father is a successful workaholic and the other father is relatively poor with other children.  At one stage the two boys play together while the successful father is upset that the son he has been raising is not of his blood.   The poorer one offers to raise both boys.  His wife is very attached to the son she has raised, but the husband is obsessed with blood lines.  Eventually although feeling very superior the one father realizes he is not as good a father.  The end is emotional as the one father realize his life has not been as meaningful as he had assumed.

"Dombey and Son" (1983) recently seen, but had read the Charles Dickens novel many years ago.  The story line is of a successful man whose wife dies after a son is born.  He finds his earlier born daughter of little interest, although she is very devoted to him.  He tries grooming his very young son, but he dies.  There is a lot of intrigue around him and eventually his business crashes.  Eventually he realizes his daughter is the one that stands by him.  Over a century ago, but in some ways we still have a long way to go.

This story takes the plot to an even more intimate level, but more than the others uses humour to make its point.   With the first couple (Kareena and Akshay) we are shown efforts to get pregnant with the wife being more determined.  Ovulation is monitored and the husband is required to drop what he is doing.  The most humorous incident might be on an airplane when they realize the most practical timing and end up in the airline toilet.  When the two couples meet there is a lot of antagonism, but it is demonstrated with a lot of misunderstandings.

Akshay is upset that his wife's baby is not his, but has no concern about the baby he impregnated.  The other couple looks at both babies as being connected to them.  Akshay thinks an abortion is the solution even though his wife may not be able to get pregnant again.  Kareena is reluctantly convinced to have an abortion, but when she is shown a ultra sound screen changes her mind.

There is much resistance, but it breaks down.  Akshay's sister and brother in law are both lawyers and although they are the ones who suggested the fertility doctor they advise on a contract.  The other couple, Diljit and Kaira have another contract that is opposite in some regards. Kareena and Akshay want no contact after birth while Diljit and Kiara want to set healthy standards of raising the other's child.  Kareena is concerned about the medical history of the sperm inside her and is told the information is confidential, but she should get to know the other couple.  Eventually they become emotionally involved with each other and when an unexpected crisis occurs all four are deeply engaged and this leads to a happy ending.

The common theme of the four movies covered is that although blood is important so is humanity.  We bring many cultural hangups that too often get in the way.  Children need loving parents and parents need to look at each child as special.

The cast and crew below have been involved with some of my all time favorites.

Jyoti Kapoor, writer with his first feature screenplay, but has contributed story ideas, including for a big hit, "Badhaii Ho" (2018) with an interesting theme involving parental sex.

The actors are listed left to right as in the photo cover above.

Kareena Kapoor Khan--has been in several memorable movies, but has also played a lot of vapid women.  I would say she is one of the better dancers and does show a little bit in this film.   Comes from a well known family in Bollywood.  Married Saif Ali Khan and has had one child.
Favorite movies of hers include "Jab we Met," (2007)  "3 Idiots," (2009) and "Talaash" (2012).

Akshay Kumar was a waiter, in Bangkok took up martial arts, asked to model and jumped into movies where he is a top box office star.   Has Canadian citizenship (actually campaigned with Stephen Harper.)   Akshay is a non smoker and participant in anti smoking campaigns, but is seen heavily smoking--to illustrate the harmful effects regarding fertility.  For the last decade he has been one of the most bookable Bollywood stars.  My attitude towards him has become much more respectful with such movies as "Special 26" (2013), "Airlift" (2016), "Rustom," (2016). "Toilet, A Love Story" (2017), "Pad Man" (2018), and "Gold" (2018).

My earlier views on Bollywood comedies are here:  http://www.therealjohndavidson.com/2018/04/chalo-dilli-deals-with-snobbery.html
Posted by John F Davidson at 11:02 AM