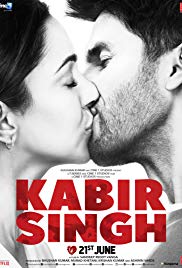 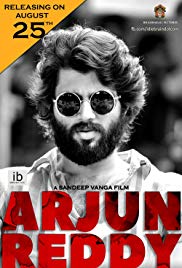 Both "Arjun Reddy" and "Kabir Singh" have garnered a lot of attention, but seemed a bit scary for me.  Nonetheless the marketing seemed too much to ignore.  And it just happened that Netflix carried both of them.

First up for me was "Arjun Reddy, " the original and at times I wasn't sure I saw what I thought I saw.  The ultimate proof was that "Kabir Singh," the remake had many of the same things in pretty much the same sequence.  A number of the items must have been testing censor boards.

One scene had the protagonist scooping up ice cubes and putting them in his pants so that he appeared to have wet his pants.  Another scene depicts using an electric razor to cut off male pubic hair.  There seems to be a steady dose of drinking, smoking, cocaine and morphine.  Swearing (in multiple languages (English, Hindi, Telegu, Kannada, Tuli) were constant.

The hero in both films was egotistical, obsessive and had an explosive temper.  Not the typical hero.  From time to time this behavior contrasted with deep concern for patients and an acknowledgment of logic.  The heroinne in both cases was attractive, modest and somewhat resistant until the inevitable capitulation to the hero.  Their first encounter was mind boggling in that the hero (I am using this term loosely) interrupted a class, centered out the heroinne who he had no previous contact with demanded she move to the front, then selected an overweight girl to sit beside the heroinne saying such girls made the best friends and throughout this experience spoke in a language not known to the instructor basically telling the rest of the male students that she was his girl and they were not to interfere with this relationship.   Before too long they were living together despite college rules against such things.  She became very attached to him and vice versa.

It took awhile but her father who had met the hero rejected the idea forcefully and arranged an almost immediate marriage for his daughter.  The father was concerned about caste and the immoral behavior.  From there the movie follows the moral downfall of the hero into drugs and drinking.  At the same time he is so talented as a doctor that all is forgiven, or mostly forgiven.  That is, until he falls so far his medical licence is taken from him.  Although will tell anyone his love is undying is not against straight sex.  One dramatic scene is when a major movie star offering sex declared she loved him, but he very harshly rejected her as he was not looking for love.  After all this drama (and more not related) the movie has a happy ending.  In some ways it seemed like a big cheating, but its saving grace was the powerful homage to undying love.

Is it realistic?  Not in my reality, but by its dramatic thrust it makes for compelling viewing.

The common link between the two films is Sandeep Reddy Vanga who wrote and directed both.  To be allowed such artistic freedom and a big budget it was really surprising this was his first film as writer and lead director.  His background is in the Telegu film industry but he did study at the International Film School in Sydney, Australia.  He did work as an assistant and associate director  in two earlier films.  While filming "Arjun Reddy" his son was born and his name became Arjun Reddy.

The lead actor for both films is very critical as he has to be believable, but not go overboard with a very violent, but nuanced character.   Both versions found such an actor.

Vijay Deverakonda had done a few Telegu movies starting in 2011, many of them comedies and he was credited with being a natural.  He has been a playback singer in two subsequent movies.  His career seems to have taken off.

Shalini Pandey played the Telegu heroinne as her first film.  She has followed the path of many southern actresses and has gone on to do movies in Telegu, Tamil and Hindi.

Shahid Kapoor was given the Bollywood lead by the director after viewing Shahid in "Udta Punjab" but one of the financers had wanted someone else.  Shahid was a very good choice.  He had been in a lot of romantic comedies, including "Jab We Met," a master piece with ex girl friend Kareena Kapoor. In contrast to "Kabir Singh" he appeared in "Vivah" where he played a young man whose father arranged a wedding with the full blessing of both families and Shahid's character.  Shahid had established a reputation as perhaps the second best male dancer in Bollywood, but it wasn't enough to sustain his career and he played in a few duds.  In the last few years his acting was recognized more and more.  He was excellent playing the troubled Kabir Singh.

Kiara Advani played the heroinne.  She had established her reputation in "M.S. Dhoni:  The Untold Story."

Both versions of the story have been top financial successes.  There are plans for a Tamil version.
Posted by John F Davidson at 11:59 AM