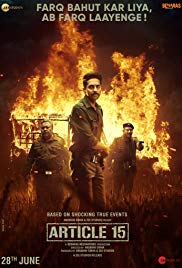 Ayushmann Khurrana has always added to the value of any of his movies I have watched.  One element is a cheerful outlook and comic timing.  In Article 15 he puts forth a different demeanor.  He is in  a position of authority, even privileged and assumes an air of confidence.  He also explodes with expletives (more on that later).

The focus of the movie is discrimination against Dalits, formerly known as Untouchables.  For me there were new details on the caste system.  Article 15 of the Indian constitution makes discrimination based on race, religion, caste, sex and place of birth illegal.  The law can only force so much compliance and attitudes will always influence outcomes.

There is a bit of a mystery, but really the audience has a pretty good idea of the guilt and the real heart of the story is a conspiracy to shut down an investigation.  Ironically some Dalits have achieved higher status (perhaps as tokens) including one of the police officers (who is part of the conspiracy).  There are political efforts paralleling the investigation that focuses on a political alliance between the Brahmins and the Dalits.  Ayushmann says that India consists of 30% elite castes being supported by 70% of lower castes.  During a few setups us outsiders realized that there are many gradations of caste hierarchy that allow even low castes to feel superior to those even lower.

The movie ends strangely when Ayushmann gathers a bunch of his crew around to celebrate the success of the investigation and served out some food.  The men and women were of different castes, but the key was when the cook was asked her caste and the answer was obliterated with a horn blast. after which there was laughter.

Regarding the expletive, it is the English form of the F word.   When first uttered in a fit of disgust one staff when asked by a naive non English staff what it meant he was told "get out" which in effect it did.  However when uttered under different circumstances (more annoyance than disgust) the same non English speaker started to leave.  The original explainer retrieved the man who thought he had been commanded to leave.  My understanding of Hindi is confined to about four words and I have often wondered when the subtitles offer an euphemism if they were hiding the F word and on the other hand when the F word or its many variations have made it to the subtitle if it was actually not as strong a word in Hindi.

Director,/writer/produceer Anubhav Sinha is known for his interest in social issues.  In his previous movie, "Mulk" the focus was on discrimination against Muslims.  Several IMDB reviewers commented on negative political trolls for this movie.  Prior to this some of his film credits included "Ra.One," "Gulab Gang" and Tum Bin...Love will Find a Way."

Mangesh Dhakde handled the music.  He had grown up with a father who operated a music school and at an early age met many musicians and was familiar with jazz, Western and Indian classical as well as Brazilian.  Prior to this movie Mangesh did the music for "Mulk."

Ewan Mulligan, the cinematographer got his career started in England where he did a number of shorts with the occasional movie and tv series.  He has been involved with a number of Bollywood movies and made contact with Abunhav Sinha and worked on "Tum Bin 2" and "Mulk"

Yasha Ramchamdai, the editor got started with shorts and location editorial jobs.    As an editor he as mostly involved with tv series.

Ayushmann Khurrana seems to select good movies.  See http://www.therealjohndavidson.com/2018/12/ayushmann-khuranna-actor-to-watch.html  This movie represents 3 big hits in a row from "Andhadhum" (one of my top 3 for 2018), "Badhaai Ha" and now "Article 15."  He now notices he has less time with his family and with 4 more films to be released over the next year there will be no relief.

Ayushmann was ably supported by Manoj Pahwa, Mohammed Zeeshan Ayyub, Sayani Gupta (enjoyed her in" Margarita with a Straw"), Kumud Mishra and Isha Talwar among others.

This has proved to be a very relevant movie.
Posted by John F Davidson at 8:06 AM