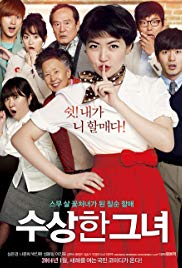 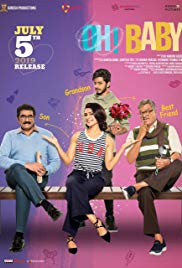 A few years back a Korean film, "Miss Granny" was available on Netflix and got my attention.  An interesting story with some pleasant music, but what really I remember is how the main character reminded me of my wife's Grandmother, known as Nanny.    More recently saw another version, this one in Telegu and titled "Oh Baby."  Starting to research the two movies it was learned there are several versions I suspect because of the interesting story.
You can find the story in Korean, Telegu, Mandarin, Filipino, Indonesian, etc. 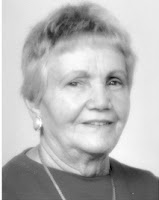 Nanny sold us our house, babysat my two children and hosted many family gatherings.  I used to shovel her sidewalk, cut her grass and dig her garden.  Mind you, she is not exactly the same as the two grannies in this film blog, but she was a strong woman. and a superb Italian cook. Enjoyed life and her grandchildren and great grandchildren.  A porch companion was Uncle John, a widower formerly married to her sister who was a handy man saving us tons of money and made our home more livable.  In a real sense Nanny is an inspiration for this blog

Similarities between the two films.  A 70 year old, meddler, loved deeply by her son, upsets her daughter in law.  Her son can't bear to ask her to go, but his daughter is blunt to let granny feel unwanted.  The Granny works with and has a widower friend from her childhood.  He is thought of as an uncle.  When through a fantasy intervention she gets the body of a 20 year old her life changes.   She has a beloved grandson with a somewhat screechy band that she takes over and turns out to be a big hit.  She is approached by younger men and in the Telegu version is responding and doesn't want to give up her new life, but does tell her old friend, the widower next door as he is about to bring in the police when he thought the young woman had kidnapped the older woman.  The family looks for her while the band reaches the finals and the grandson on his way has an accident.  Both movies use the same mechanism in dramatic fashion to restore Granny to herself.  If you are inclined to cry at sad movies you probably will shed a few tears towards the end, BUT both films end with a big laugh

In both movies a blood transfusion fills the role of a fulcrum. The need for one forces a life changing decision.  Still a part of the overall fantasy, but changes the mood temporarily.

Another element from both films is discrimination of old people.   The younger version criticizes a young man criticizing an older man who was flirting with the young granny.  The whole film projects the idea that it is better to be young, but it also points out that elders deserve respect.

I remember the basic story from the Korean version, but inevitably have forgotten a few details which the newer version helps bring back.  The difference in film time is over 30 minutes so it seems more details were added in for the Telegu version.  The Telegu version has a more extended romance with a younger man and more family conflict  In the Korean version her grandson attempts to attract the young granny and in her thoughts his grandmother says they are the same lines used by her husband.

Music is important.  The old granny feels she could have been a singer, but never got the chance. In her youthful version she becomes a popular singer.

In the Korean version, the music is by Mowg who won an award for "Miss Granny."  Also provided music for "Burning" and "Masquerade."

Mickey J. Meyer did the music for "Oh Baby"  His musical career began with symphonies and piano pieces, but he admired Hans Zimmer, Enio Morricone and A R Rahman and gravitated to films, mostly Telegu and Malayalam.  His music is described as slow moving, lacking thumping beats, but popular.  The background music was much appreciated.

The original writer is Dong-ik Shin and he is credited with some of the new versions of his script, but not for "Oh Baby."  Dong-hyuk the director and co-writer, sometimes also gets credit with newer versions.  He wrote and directed "Silenced," one of my highlighted movies from 2018 blog.

"Oh Baby" was of course adapted, with Laksmi Boopal handling the Telegu dialogue and song lyrics.  Gopimolan supervised the script and director Nandini Reddy also was involved in the writing.

Nandini Reddy has overcome barriers to be a female director.  Started with a children's film and then found it difficult to get work until a year later directed a movie in the Kannada language.

Cinematography in "Miss Granny" was handled by Ji-yong Kim.  He had been a camera assistant for a joint Korean-American film "Okja"  Other films of  his included "The Age of Shadows" and "Silenced"

Editing for "Miss Granny" was done by Na-young Nam who had also done "Mother" and "The Good, the Bad the Weird."

In both cases the actress who played the younger more active version of Granny  was central to the plot while the original Granny was played by a veteran respected actress.

Laksmi, a verteran actress played the older Telegu grandmother.  She has done 400 films including Tamil, Telegu, Kannada, Malayalam and Hindi.  She turned her back on Bollywood as she felt she would only get female stereotype roles and preferred more socially relevant roles available to her in southern India.  Her daughter Aishwarya ironically has the role of the beleaguered daughter in law.

In-hwan Park played the elderly friend of Miss Granny.  He later went on to play the lead in "Navillera" (2021)

Samantha Ruth Prabhu played the young Swathi.  As is common in India she has a backup singer, Nutana Mohan taking care of the songs very well while Samantha lip synched and danced in some cases.  First noticed Samantha in"Eega "(most unusual story line involving a lover reincarnated as a housefly, but very popular).  Samantha is bilingual with Telegu and Tamil and has won awards acting in both languages.  She has made money as a brand endorser and model and since 2012 has channeled much of her money through a charitable trust to help pay hospital bills for young children, pay for patient flights to the Taj Mahal and to meet film celebrities and boost awareness of haemophilia.  She is a delight to watch.

The story requires you to take a leap of faith, but if you are willing, either film will make you laugh and perhaps cry.  It might also remind you of some older person who meant a lot to you.