Ayushmann Khuranna; An actor to watch 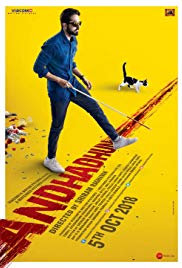 Not as good looking or confident or even charming as Shah Rukh Khan, but Ayushmann Khurrana is very likeable, natural, and selects good movies often with a social message.

Ayushmann was born in 1984 in the city of Chandigarh.  He majored in English literature and took part in many college theatrical productions winning a few awards.  From there he worked as a tv host.

"Vicky Donor" (2012) was a big breakthrough.  He played a reluctant sperm donor.  Keeping it secret from his family to avoid embarrassment and later from a woman (played by Yami Gautam who with Ayushmann won a best debut award) he met at the bank.  As you might imagine there was a lot of room for humour which is very natural for Ayushmann, but it also had a few 'touching' moments that made it a memorable film for me.

After this he went into three movies that might be described as mediocre both in artistry and popularity.  "Nautanki Saalat" (2013), "Bewakoofiyaan"  (2013) with Sonam Kapoor and "Hawaizaada" (2014).  Not bad time fillers, but not much more.

Another breakthrough in 2015 with "Dum Laga Ke Heisha" that got a better than anticipated box office.  Ayushmann's character was persuaded to an arranged marriage, but his wife was overweight and better educated than him.  Bhumi Pednekar played his wife and won our admiration.  Eventually he adjusted for a not unexpected happy ending.   http://www.therealjohndavidson.com/2015/05/a-feel-good-movie-little-off-beaten-path.html

Next release was "Meru Pyaar Bindu" (2017) with one of my favorite leading ladies Parineeti Chopra, but not particularly noteworthy.

Bhumi took on a socially progressive role in "Padman," (2018)  but has reunited with Ayushmann to help start a string of highly regarded films with "Shubh Mangal Saavdhan" (2017)  In this film Ayushmann plays a man with erectile dysfunction discovered before marriage.  His wife bears with him through several failures.

Next up for Ayushmann was "Bareilly ki Barfi"  (2017) a popular romance comedy with Kirti Sanon and Rajkummar Rao.  It won a best screenplay award.

For 2018 Ayushann played a blind pianist in "Andhadun" (2018) which had one of the highest ratings ever for a Bollywood film.  It was considered a combination of thriller, comedy and a bit of romance.  Tabu, playing a murderess was brilliant.  see more of her:  http://www.therealjohndavidson.com/2015/12/tabu.html  Radkika Apte provided a little romance.  The film is full of twists with a little gesture as the camera fades makes you wonder if you can believe every thing you had just been told. The editing decisions of  co-writer Pooja Ladha Surti added to the suspense.  Written and directed by Sririam Raghaven who had done "Ek Hasin Thi" (2004 ) and "Badlapor" (2015). 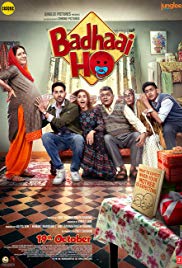 Another hit follows with "Badhaai Ho" (2018) where Ayushmann's mother gets pregnant in her 50's.  Sex is not seen as normal for elderly.  Not seen, but assured it is very funny and in the end  an enjoyable family film.  Has done very well at the box office.

2019 looks to be another busy year.  He is scheduled to have three films released.  The first is "Bala" with Bhumi Pednekar for September.  Next is another romance comedy, "Dream Girl" with Nushrat Bhuarucha for November.   Also included is "Operation Kukri" with Shah Rukh Khan who also will write the script.  It is about a military event when the Indian army was involved in liberating hostages in Sierra Leone in the summer of 2000.

Ayushmann has written a few songs and sings in film and live.  As a host he was personable and spontaneous enough to get an opportunity with movies.  His future looks very bright.

Still another blog on an Ayushmann film, "Article 15" is here http://www.therealjohndavidson.com/2019/09/article-15.html