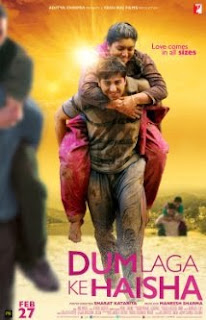 How do you feel about arranged marriages?  We all like to think love conquers all and love to see it come true on the movie screen.  Reality for some is not so scripted.

In 'Dum Laga ke Haisha" Prem, in his twenties is puttering around in his father's music cassette business which is having financial problems.  The father is looking for a way out.  They approach the local temple for some guidance seeking a bride who can earn some money for their son.  They find Sandhya who has two strikes against  her in Prem's view--she is overweight and she is better educated.  Nevertheless Prem's parents seeing her job prospects and her pleasant demeanour push him into the marriage.

The first night after their wedding is very awkward and the next morning Sandhya tells a friend by telephone that the marriage was not consummated and his family overhears.  Prem is upset being forced into this arrangement and eventually both want to end the marriage.  Taken to a divorce court the judge decides they must live together for 60 days and then he will grant a divorce.  In the meantime Prem fails for the third time an English exam while Sandhya gets offered a teaching job out of town.

Yes, there are lots of little details and they gradually become more respectful of one another.  The climax comes from what might seem a sexist event where there is a race with husbands carrying their wives over an obstacle course.  This is referred to throughout the movie as Prem's parents took part in this annual event many years before.  It seems an humiliating event for the oversized bride but three factors bring about the choice to enter.  An aunt who had been abandoned by her husband a decade before learns of his death and regrets that she never enjoyed her marriage and urges her nephew and Sandhya to do something together while they still can.  Prem has regularly attended a club where fitness is encouraged and other members are taking part in the race. There is a monetary prize that could be a big incentive, but really that seems impossible.

The race will be no surprise for romantic viewers, and it does lead to a greater appreciation of each other from the couple.  Hope I haven't spoiled the ending, but it does fit the happy ending romantic genre.

Set in the 1990's in Haridwar, India with a lot of attention paid to the environment.  Haridwar was noted as one of the holiest cities in India, but there are few indications of that.  Cassettes were being replaced by compact discs.

Ayushmann Khurrana made a great impression in "Vicky Donar" and then appeared in three non impressive movies in a row.  Here he is offered an unusual pairing--not the sort you associate with big heart throb movie stars, but in accepting this role he probably did advance his career.

Bhumi Pednekar makes her film debut and portrays a woman who has been humiliated, but has lots to be proud of.  For this one movie she takes on the leading lady role and shows she deserves it.  Her acting skills will earn her more movie roles.

The supporting cast does a capable job. Sanjay Mishra is making his mark in character roles, although not too long ago he was the leading subject of "Ankhon Dekhi."

Sharat Katariya the director and writer deserves the most credit.  This is only his second movie as director, but he has been involved as writer in a number of films.  Relatively short by Bollywood standards with just enough scenes to convey the tensions and disappointments without belabouring them.

Kumar Sanu is at the very beginning on tape representing a big playback singer of the time and near the end sings live before the contest.  This part of the movie is nostalgia as Kumar was a playback singer for over 400 movies including two of my favourites, "Diwale Duhainia Le Jayenge  and "Kuch Kuch Hota Hai."

This low budget film was chosen for the closing night at the New York International Film Festival on the same day May 9th as I write about it.  Incidentally the Hindi title is translated into English as "My Big Fat Bride."--not sure if it is literal.

Another feel good movie with Ayushmann Khurrana is "Vicky Donor  It is about a reluctant sperm donor who hides his source of money while courting a bank employee.  There is lots of comedy, but at the end is very heart warming.

Another blog on Ayushmann is here:  http://www.therealjohndavidson.com/2019/09/article-15.html