Getting set for retirement I thought it time to switch my emphasis from non fiction to fiction.  I have always found a well written novel is hard to put down.

"The Son in Law" by Charity Norman was only discovered after a flukey chain of unlikely events, but I am grateful for grabbing it when I had the chance.  The book is beautifully layered.  You are introduced to a dramatic emergency resulting in death.  Next you go a few years ahead to learn some of the consequences.  Then you go back and gradually uncover the background.  The son in law (and you know he can't really be as bad as first portrayed) is hated by his in laws and the book really tracks how that originated and follows how it evolves.  Hint:  a masterpiece of mediation.  Read more:  http://www.therealjohndavidson.com/2018/02/charity-norman-discovery.html

"MacBeth" by Jo Nesbo was an ambitious murder political power inspired by William Shakespeare.  I had studied MacBeth in high school but confess many details eluded me.  Nesbo has shifted from mediaevel times to more recent, but has retained many of the same names and locations.  Instead of royalty as the structure for power politics he uses a police force and municipal government.  A few other elements were three witches and obsessive washing of hands.  The real core is of power politics.  If you are familiar with Jo Nesbo you would be right to expect interesting violence.

"The Husband's Secret" by Liane Moriarty was enjoyed during my trip to New Zealand.  Vjakumar MK Nair, a Facebook friend from India first brought author to my attention   Enjoyable read.

"Manhattan Beach" by Jennifer Egan is an historical novel set before and during World War II.  The protagonist is a determined woman who becomes an underwater diver against male rules.  There is also a mystery involving gangsters and a missing father.

"The President is Missing" is full of inside information and a complicated plot.  The president is on the verge of being impeached yet is faced with Armagedden and unable to tell his tormentors.  Reminds of Bill Clinton when he first tried to kill Osama bin Laden.  There are mechanical details few would know about, but the most fascinating feature is the political games being played.  Government certainly seems complicated with the president constantly juggling a variety of balls.  It has the clever twists one would expect of James Patterson.  A few digs against the Russians and Saudi Arabians.  Towards the end there is a list of Democrat agenda with a few sly comments on Republicans, but since I think Hilary should have defeated Trump easily it only adds to my enjoyment of the book.

Lots of politics, but there is more.

21 Lessons for the 21st Century, another book by Yuval Noah Harrari that deserves recognition as the  best of the year.  Everyone should read his three books to better understand where humankind has been, where it is going and what needs to be thought for today. For more: http://www.therealjohndavidson.com/2018/12/21-lessons-for-21st-century.html 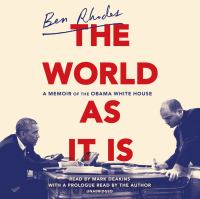 "The World as it is" by Ben Rhodes a speech writer and aide to Barrack Obama.   Ben traveled with Obama helping make many key speeches such as for Mandela's funeral.  He also wrote for Suan Rice for the initial response to Benghazi.  He points out Republican hypocrisy.  Also on Russian intransigence with Crimea.  He reported how Mitch McConnell blocked attempts to publicize Russian interference with the American election.  He was given negotiating responsibilities regarding improving Cuban relations and for cleaning up the mess left by American bombs in Laos.    For more check  http://www.therealjohndavidson.com/2018/06/the-world-as-it-is.html

"What Happened" by Hilary Clinton, may be seen by some as excuses for her failure to get elected, but it a good analysis of the election and events subsequently learned reinforce her analysis. http://www.therealjohndavidson.com/2018/02/hillary-clintons-what-happened.html

"Hitmaker's"  http://www.therealjohndavidson.com/2018/02/hit-makers.html   Ever wonder what makes one piece of art/music become a hit while others never reach public consciousness?  A few answers, but you will have to work hard and be a bit lucky if you want to duplicate some of the success stories.

I was persuaded to read "The Devil in the White City" by co-worker Susan Brinkmann.  An interesting juxtaposition of a serial killer and the Chicago World's Fair with its architectural wonders.  Makes for compelling reading.  http://www.therealjohndavidson.com/2018/04/the-devil-in-white-city.html

"Rescue" was bought after author David Miliband was on tv with Fareed Zakaria.  While there are many countries acting out an anti-immigrant hysteria the refugee situation is desperate.  It is tied into not only political turmoil, but also climate change so we are all complicit.  http://www.therealjohndavidson.com/2018/04/rescue.html

"Ordinary Virtues" illustrates that similar to the United States we in Canada do not properly appreciate real global thinkers.  Michael Ignatieff as part of a project identified four virtues (tolerance, forgiveness, trust and resilience) as essential for global survival.  Interesting examples around the world.  http://www.therealjohndavidson.com/2018/04/the-ordinary-virtues.html

"Leonardo da Vinci" was another engrossing biography by Walter Isaaccson.  Da Vinci was more than a genius, known for his art, science and engineering.  You the reader would learn how deeply he understood the human body and how it was reflected in his art.  He truly is one of the giants that others have stood on.  http://www.therealjohndavidson.com/2018/05/leonardo-da-vinci.html

"No is Not Enough" is another Naomi Klein well thought out protest book.  She sees greedy politics denying climate change.  She covers up to the Puerto Rico recovery which she asserts is undergoing shock therapy.  http://www.therealjohndavidson.com/2018/05/naomi-klein-writes-another-insightful.html

"No Turning Back" is based on numerous interviews by journalist Rania Abouzail undercover from 2011.  She covers prisoners, refugees, fighters,one child.  Some of the complexities reported.

"Triumph of Christianity" by Bart D. Ehrman reports on how Christianity rose above many pagan religions to dominate the western world.  St Paul, more than the original apostles attempted to convert non Jews.  Constantine's conversion led many others to follow and gain momentum. Lots of psychological perspectives.  Read more: http://www.therealjohndavidson.com/2018/08/the-triumph-of-christianity-history.html

"That's what she said" is an interesting book advocating a bigger role for women for the good of us all.   The title comes from an experience where a man gets credit for an idea first voiced by a woman.  Read more:  http://www.therealjohndavidson.com/2018/08/thats-what-she-said-book-worth-reading.html

Fascism Madeleine Albright writes of parallels between Fascists and modern America under Donald Trump.  She grew up in Czechoslovakia and saw much of the political changes in Europe.  Her observations while working with Bill Clinton and since are very perceptive.  For more check  http://bit.ly/2AyLCbp

"Fear" by Bob Woodward:  makes it seem that there are endless anti-Trump books.  Hopefully the deluge will accomplish something constructive.  More at:   https://bit.ly/2DTSkee

"Prius or Pickup" starts with a simple premise that people can be reduced two major world views allowing for people that are somewhere in between.  Of course it is a little more complicated and they explore consequences. Read more:  https://bit.ly/2Siu2im

In an attempt to better myself I am always on the lookout for self improvement books, particularly with a new slant.  "Get your Sh*t Together" by Sarah Knight comes from a different angle.  The language gets your attention and her advice is compatible with what you may have read elsewhere.  To follow further:  http://www.therealjohndavidson.com/2018/03/get-your-sht-together.html

CANADA READS  was a mix of fiction and non-fiction.  For book lovers the contest where champions campaign and dissect each other is one of the most entertaining events of the year.  This year I was able to read the five nominations, but did so after the winner  "Forgiveness" had been declared. Read more including a brief discussion of each book.      http://www.therealjohndavidson.com/2018/10/canada-reads.html