Douglas Sirk, a more appreiated director after his death 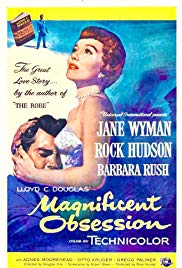 When one explores older movies, history brings out things that are long forgotten or taken for granted.  The name Douglas Sirk repeated itself a few times and my first notion was he must be some sort of art movie favorite.  Lately my feeling is that he was a manipulator of making stories enjoyable, but to point out some of the foibles of American society.

After his retirement his reputation rested on a series of movies that are considered "melodramatic."  Some critics had a low opinion of such movies, but later, after he finished in Hollywood his style was more appreciated.  Jean-Luc Godard and Rainer Werner Fassbinder praised him from Europe and slowly he was recognized for his contributions.

Born in Germany in 1897 of Danish parents as Detlef Sierck, a name used for his early German films.  At age 14 he developed an interest in both theatre and cinema. He studied law at the University of Munich, but switched to University of Hamburg to study art and philosophy.  In 1922 he directed his first stage play.  His first  feature was shot in Dutch and then in German.  His films were admired by Dr Joseph Goebbels, but in 1937 left Germany.  His first wife was a Nazi sympathizer and denounced him for marrying Hilde Jary, a Jewish actress.

He left Germany as a well respected director and had learned much that carried forth to his American career.

In 1941 he and his wife reached Hollywood.   His first U.S. directed film in 1943 was "Hitler's Madman," an account of the assassination of Reinhard Heydrich by Czech resistance fighters.

"Summer Storm" was released in 1944 adapted from an Anton Chekhov novel.  Starring George Sanders who had a sarcastic wit, much used in this film.  In 1944 he did another film, "A Scandal in Paris" with Sanders.  George Sanders proved to be reliable and was later in at least two more films.

In 1947 Lucille Ball was the lead actress for "Lured," a serious movie, but a viewer can appreciate Lucille's timing.

Next come the films that Sirk is best remembered for.  In 1954  "Magnificent Obsession," with Rock Hudson and Jane Wyman, a couple that he brought together a year later for "All that Heaven Allows."

In 1956 Sirk was involved with "Never Say Goodbye," but not credited as he was called in for a re-shoot at the request of George Sanders and the studio.  He also was responsible for bringing in the leading actress Cornell Borchers from Germany.

"Written on the Wind" was also in 1956 again with Rock Hudson, this time with Robert Stack, Lauren Bacall and Dorothy Malone (who won the Oscar best supporting actress).

A year later he reunited  Rock Hudson, Robert Stack and Dorothy Malone for "Tarnished Angels."  William Faulkner whose novel was the basis approved it has a good adaptation.  Noted for airplane sequences.  Rock Hudson endeared himself to Robert Stack by a surprise towing of a sign "IT'S A GIRL by stunt pilot to commemorate the birth of his first child.  Rock Hudson also insisted on including a young Troy Donahue in the cast.

In 1959 Sirk wrapped up his American career with "A Time to Live and a Time to Die" (from novel by Erich Maria Remarque) and "Imitation of Life."  Starring Lana Turner at a critical time in her personal life one critic called this the saddest movie--read more at: http://www.therealjohndavidson.com/2014/08/the-power-of-sad-movies.html

Uncomfortable with the Hollywood lifestyle (such as nude swimming parties) he  left with his wife for Lugano Switzerland in 1959.  He was a supervising director for 3 German shorts before his death in 1987 in Lugano.

His most remembered films were considered "women's pictures" what today we might call chick flicks.  They contained all the elements; romance, tragedy, melodramatic music and crying.  Dig a little deeper and some critics appreciated his technical skills.  He was a subtle social critic.  His films depicted strong intelligent women.  Other themes included upper middle class snobbery, hypocrisy, racial tensions and faulty masculine ideals.

Rather than rely on monologues he hired actors based on personality with emphasis on getting on with the other actors.  He used lighting and mirrors to help create moods.

No person succeeds in life without  a supporting team.  Altogether he directed 5 actors to Oscar nominated performances with one, Dorothy Malone winning.

Rock Hudson has a reputation of a glamour boy, but Sirk saw somebody he could work with.  His looks and his voice helped make him one of the most popular stars from Hollywood.  Aside from the movies cited, Rock appeared in several other Sirk directed movies.  He was nominated for an Oscar with "Giant."  He later starred in a successful tv series, "McMillan and Wife."  After he was diagnosed with AIDS he donated $250,000 to help launch the National Aids Research Foundation.  He had been quoted saying that Sirk was like a dad for him.

Music played a strong role and the key composer was Frank Skinner.  Frank had a very prolific and versatile list of  musical scores.  He was most famous for music for horror movies.  He wrote the scores for "Magnificent Obsession," "Written on the Wind," "All that Heaven Allows." "The Tarnished Angels," "Imitation of Life," and at least two others.

Sirk had at least three interesting cinematographers that supported his efforts.  Like Sirk, Eugen Schufmann had been born and trained in Germany.  He moved to France in 1933 and  in 1940 he moved to the U.S.  He had developed a process for optical special effects that was eventually replaced by newer techniques and materials.  He joined what amounted to the wrong union and found that due to regulations he was not credited for many of his movies.  For Sirk he handled "Hitler's Madman," "Summer Storm" and "Scandal in Paris."  He won an Oscar in 1962 for "The Hustler."

Russell Metty first got into the film business starting as a lab assistant and then became an assistant camera man and by 1935 RKO has hired him as lighting camera man.  He handled one of the highlight scenes from "Touch of Evil" and had gone onto get an Oscar nomination for "Flower Drum Song" and an Oscar win for "Spartacus."  For Sirk, he handled some of the more well known films, "Written in theWind," "All that Heaven Allows," and "Magnificent Obsession" plus 7 others.  He worked on many television series such "Columbo," ""the Waltons" and "Rich Man, Poor Man."

William H Daniels directed 4 films for him including "Lured."  His fame is established for the 21 films he directed with Greta Garbo and winning an Oscar for "The Naked City" in 1948.

When we watch movies it is very difficult to appreciate how the thinking and work that goes into creating a mood.   Douglas Sirk is now regarded as an excellent artist, but many fans already loved his films before the critics came on board.
Posted by John F Davidson at 11:11 AM