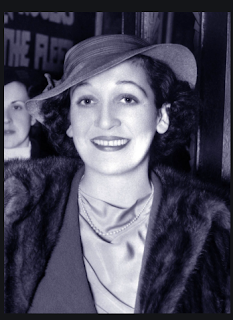 Up until a few decades ago most music was written by men, but a few women blazed a trail that benefited all music lovers.  Dorothy Fields wrote the words of hundreds of tunes, many of which are still heard by many.

Dorothy Fields, born on July 15, 1905, in New Jersey, daughter of performers. Her father was Lew Fields, part of vaudeville duo, Weber & Fields.  He discouraged his daughter for show business and when he learned she was involved with acting he reportedly told her that it was unladylike.  She supposedly replied "I am no lady I am your daughter" paraphrasing a famous Weber and Fields joke, "That was no lady, that was my wife."

For awhile she was a teacher and a laboratory assistant, but finding time to be involved with writing for theatre and magazines.   A breakthrough occurred in 1928 when she wrote the lyrics for "Blackbirds of 1928."  This led her to meeting Jimmy McHugh a song plugger.  They worked together for a few years on Broadway, for the Cotton Club (for Duke Ellington) and in Hollywood.  Some of the songs Dorothy wrote the lyrics for included, "On the Sunny Side of the Street," "Exactly Like You," "I'm In the Mood for Love," "Big Spender," and "I Can't Give You Anything But Love."

In the middle 1930's she wrote lyrics with Jerome Kern including for the classic film, "Swing Time."  The song, "The Way You Look Tonight," which won the pair an Oscar.  Another was "Pick Yourself Up" (see below).  A tricky song was for a romance that was not going anywhere and had to be staged carefully.  She came up with "A Fine Romance" song by Ginger Rogers and Fred Astaire to depict the awkwardness of their relation (which did warm up).  She also wrote for "Roberta" with Jerome Kern.

Barrack Obama paraphrased a line from "Pick Yourself Up" at his 2009 inaugural address, "Starting today we must pick ourselves up, dust ourselves off and begin the work of remaking America."

She transitioned from writing song lyrics to being a librettist, the one who writes the book of the play.

She had the original idea for a musical based on Annie Oakley.  Originally Jerome Kern was to write the music, but he died and was replaced with Irving Berlin.  Dorothy was listed with her brother, Herbert Fields for writing the musical book.  "Annie Get Your Gun" was released in 1950.

She wrote with Cy Coleman including:  "Lets's Face It," "Something for the Boys," "Mexican Hayride" and "Sweet Charity."

In 1959 she shared a Tony award with three collaborators for the musical "Redhead."   Her collaborators were Herbert Fields, Sidney Sheldon and David Shaw

In 1971 she was inducted into the Song Writers Hall of Fame.  Altogether she wrote 400 songs many of which were included in 15 stage musicals and 26 movies.

She was introduced to her second husband, David Eli Lahm by Herbert Sondheim, father of Stephen Sondheim who called her Aunt Dorothy.  Dorothy and David had two children.

She was known to spend several weeks researching for a song.  "I'm writing a song to fit a spot in the show." She died in New York on March 28, 1974
Posted by John F Davidson at 6:51 AM