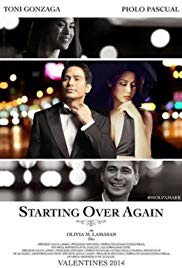 Netflix is a savvy marketer.  They have noticed that many immigrants to America love to watch movies from their homeland and at the same time are able to use their expertise to spread culture around the world.  What this means is that by targeting different ethnics with movies in their native language they also offer them for the rest of the population.  Out of curiosity or a desire to learn more many Americans (and Canadians) take advantage of the opportunity to see how the rest of the world likes to tell its stories.

The world is opening up to anyone willing to explore.  Always looking for something different stumbled on one Filipino movie  In a short period of time watched four Filipino movies.  The first was "You're my Boss" which I enjoyed, but admit not quite up to American standards.  But it inspired me to watch "Starting Over Again."  And in turn watched "Everything About Her" and finally "Barcelona"  Really just a glimpse of a different culture (with many Western overtones), but some interesting stories told well.

All movies are stories enhanced by technology and creativity.  It has to be believable at least to the point you can identify with what's happening.  Not that you feel they are telling your story, but that it is about something you can feel.   It helps if the actors look and behave naturally.  Of course some are set up in weird costumes, but there still must be something .  The camera is often taken for granted, but it can.   Music ads to your enjoyment, more so if it fits the story.

"You're My Boss" (2015) was a comedy where deception was a key factor.  One woman was substituting for her out of town boss, but soon as a Japanese company couldn't at first accept a woman boss, her male assistant pretended to be the boss.  Naturally the couple seemed misfitted.  The male had a rural family and a different way of looking at things.  The woman was status conscious.  Of course they sorted out their differences.  Basically the two main characters were likeable, the plot was comical in parts.  Some very interesting scenery, both in Manila and a rural coastal town.  Directed and co-written by Antonette Javana.  Emerzon Texon wrote the music.  Carmi Raymundo is listed as creative producer.  Hermann Caravail took the cinematography.  Starred Toni Gonzaga as the substitute executive (more on her later) and Coco Martin as her personal assistant.  Coco won an acting award for this film, but at one time was a janitor in Alberta, Canada.


Toni Gonzaga was listed for "Starting Over Again" (2014--pictured at the top).  I thought I could predict the outcome from the title.  The reviews were very favorable.  The story line had to do with the aftermath of a breakup and then evolved into a love triangle.  Humiliation and misunderstandings were untangled.  It did not end the way I thought it would, but poetic.  The acting was really good and the way the plot was laid out kept viewers engaged.  I learned Toni (who deservedly won an acting award for this role) was a singer and I ended buying one of her tunes.  Piolo Pascual also won acting awards for this film and sang a song, having won 2 song awards.  Iza Calzado played the newcomer to the love triangle and looked very sophisticated. One scene I remember with the two women discussing the difference between cooking and baking was informative and metaphorical.

"Everything About Her" (2016) also had good reviews  The two female leads were very good with the male lead ok.  The story was about families that were dysfunctional.  It takes a problem to bring people together; in this case it was cancer.  The mother was highly successful, but very bossy who had driven her husband and son off to America was brought down to earth by a diagnosis.  The young woman who was hired to be a personal nurse also was strong willed, but was resentful of her mother having left the family.  The nurse meets the son; there is of course a little distrust, but ironically they each help the other to forgive.

Directed by Joyce Bernal who also did some editing.  Writing was shared by Mia Concio I enjoyed the background music by Carmen Cuya.  Cinematography by Shayne Sarte.  Carmi Raymundo was the creative producer.  Vilma Santos played the cantankerous matriarch and is the most prolific award winner starting back in 1964 as best child actress.  She has also been elected mayor of Lipa City and Governor of Batangas.  Angel Locsin played very capably the personal nurse.  Xian Lim who is part Chinese and sometimes has Chinese speaking roles played the son.  He had been born and raised in San Francisco before going back to the Philippines at age 18 with his family

"Barcelona" had a moderately high rating on IMDB, but also had three very negative reviews.  A common criticism was about the acting and casting.  Maybe somebody else could have done a better job, but the two leads more than interpreted the story to my enjoyment; they were a delight to watch.  The cinematography was beautiful, possibly noticed more because Barcelona is a gorgeous city.   Over laying the end credits were bloopers that showed the actors had some relief from the heavy emotions.  The film won several awards.

Olivia M Lamasan was the director and had been a script consultant for both "You're My Boss" and "Everything About Her."  Carmi Raymundo wrote the screenplay.  Hermann Claraval did the cinematography.  Daniel Padilla played the male lead and won an award for it.  Paired with Kathryn Bernardo they won movie love team of the year (for the second time).

The last three were melodramatic with high emotional content.  In all three movies one is aware that Manila is modern looking city and many of its citizens are sophisticated.  It reminds me of Bollywood that ignores the poor and backward in most of its films.  What we identify with is the middle class and what we envy is the upper class.  Even more than in Bollywood much of the dialogue is in English--partly because it is seen as a mark of an educated person, but possibly also because they want to hit a wider audience.

As of 2018 "Manila in the Claws of Light" (1975) was only the second Filipino movie I have seen.  Filmed in 1974 under the direction of Lino Brocka during the dictatorship of Ferdinand Marcos.  It was introduced by Martin Scorsese who borrowed the ending for his movie, "Taxi."  There is a love story, but it also carries a political message.  Corruption is very evident.  Not comedic nor melodramatic, but let me know there is a long history of film in the Philippines.

Thanks to Netflix for expanding the world.
Posted by John F Davidson at 10:29 AM