It's Okay Not to be Okay 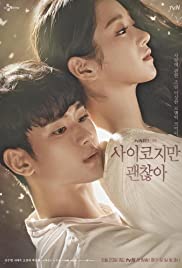 It is modeled as a romance, but set in a psychiatric hospital.  The leading male is a psych ward caretaker.  The leading lady is an anti social children's book author.  An autistic older brother is a key character.  A female psych nurse who spent a significant part of her youth with the other three is tied into a love triangle.  There is a mystery that slowly unravels and relationships that develop and intertwine with others.  The supporting cast is well developed.

Sex is underlying in almost all films, but in Korea there is a television code that only allows suggestive sex, not actually simulated or nudity.  It is charming as the viewer can easily imagine the sexual tension that is eventually released with a kiss and even lying in bed together.  It is danced around in this series in a delightful manner.  If you crave nudity and more simulated sex you had better avoid Korean tv. dramas, but might be surprised by Korean movies.  But if you crave romance and all the tensions involved this will be very engaging for you.

Animation is well used.  Flashbacks from different perspectives advance the story and understanding.    They also like to substitute a younger version on one actor in action with a current actor so the viewer cqn appreciate the signficance.

Jo Yong with only her second script based it on her own love story with a man with a personality disorder.  She acknowledges she didn't handle it well.  She studied autism through talking to siblings of autistic children.   From the series she has been encouraged by Park Shin Woo, the director and the illustrator Jam San to publish five books that were used for the script.

Nam Hye-Seung, composer and musical director took a music degree from Yonsei University.  She has been very prolific with films including one of my favorites "Crash Landing on You" (2019).  Read more; http://www.therealjohndavidson.com/2020/02/crash-landing-on-you-very-addicting.html

Kim Soo-Hyun plays the psyche ward caretaker.  At the beginning he did not seem like a typical male lead (too youthful and leaden), but as the series progressed one could appreciate his versatility and understand his enormous popularity.  His role called for a emotionally depleted younger brother of an autistic man.  He has won numerous Korean awards and is popular all over east Asia.  Some of his films include, "The Thieves" (2012), "Miss Granny" (2014) and a cameo with "Crash Landing on You" (2019).   He came to this film after his obligatory military service.

Seo Ye-Ji plays the children's book author and frankly she plays a bitch in some ways right up to the end.  But she is glamorous and also shows a wide range of acting.  She has appeared in numerous tv. series since 2013 plus a few movies including "The Throne" (2015).

Oh Jeong-Se plays the autistic older brother and is very key.  Has appeared in "Swing Kids" (2018) for which he won a best supporting actor award.  He has been in films since 2003.  In "It's Okay Not to Be Okay" he describes himself as younger than he looks.

Park Gyuyoung plays the nice girl who you root for and completes the foursome that are inter acting with one another.

Kim Mi-Kyung plays the mother of the nice girl and manages to advise and console almost all of the other characters.  Been in many television series and movies including "Secret Sunshine" (2007).

Kim-Joo Heon plays the publisher who starts out as the boss bribing people to protect the book author but becomes more likable towards the end of the series.  He has appeared in numerous tv. series and films including "Train to Busan" (2016).

Jang Young-Nam plays the head nurse at the psychiatric hospital and perhaps provides the biggest character range of any.  Keep a close view.  She has won several awards including for "A Werewolf Boy" (2012).

Kang Ki-Doong played the friend who also grew up in the same town and operated a small restaurant..

I have now seen over ten Korean tv. series and can recognize patterns, but also have seen a lot of unique ideas.  They are addicting.  http://www.therealjohndavidson.com/2020/04/an-addiction-to-korean-tv-mini-series.html

As usual I have bolded movies I have seen and would add they are all worth watching.