Chhichhore is for Losers (ie. most of us) 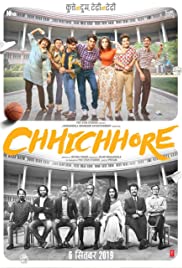 Winning is our goal.  Winning sports contests or university admissions is a focus of life and is reflected in many movies.  "Chhichhore" (2019) starts off with one of the extreme consequences of not winning.  Really not winning at a much wanted goal, but overlooking there is more to life.

The folks at the National Film Awards in India recognized Chhichhore" as the best Hindi film of 2019 and the award was supposed to have been presented in May of 2020, but due to the Covid  pandemic was delayed until 2021.  In the meantime the lead actor, Sushant Singh Rajput committed suicide which in terms of this film is ironic.

The plot is set up with a student's attempt to kill himself because he failed to get accepted at a nationally recognized university.  His parents are divorced and both upset and to some extent blame each other.  The son is very badly injured and his parents steel themselves for the worst.  The father who appears to be a successful businessman decides the best strategy would be to tell his son about his own "loser" past and draws in some of his loser friends from his university days.

The story is told in instalments with the doctor interrupting to comment that if there is not an improvement the young man will have to undergo some risky surgery.  There is doubt that they should continue.  But they do.  Their stories are about college students who were assigned to a particular residences because they weren't considered good enough for another residence.  They develop a cameradie to support one another.  They get involved in a sports competition and although not as talented as their main rivals they pull out all the stops (many comically unethical).  Several of the protagonist's friends are brought to the hospital to explain their part of the story and they appear successful--some coming from the United States.

An important part of the story is the protagonist and his wife.  At college he had been told those in his residence didn't have a chance with the women on campus.  With the help of his friends he was able to make an impression on one woman who he later married.  It was amusing how he broke down the barriers.  But once he got into the work force he did become a sort of a workaholic and had great plans for his son subtly pressuring him to pass the all important admission test.  He divorced his wife, but they kept a relationship because of the son.

After his attempted suicide she blamed herself for letting her husband have custody.  Because the son expressed the feeling of being a loser he decided to tell his own story with his wife tolerated reluctantly and then more enthusiastic.  She was very involved with the residence in their competition.

You can guess the ending and you would probably be pretty close.  We are taught to strive to win, but not so much how to deal with losing.  The bottom line is that there is more to life than winning.  Despite or maybe because of he serious theme there is a lot of laughter.

Such a movie was the result of experienced and talented crew.

Producer Sajid Nadiadwala is the grandson of famous filmaker A.K. Nadiadwala and got an early start as a production assistant.  His first produced film was in 1992 working with stars like Akshay Kumar, Sanjay Dutt and Salman Khan. Rani Mukherjee, Preity Zinta and Priyanka Chopra.   In 2009 he signed up Sylvestor Stallone for a Bollywood film, "Kambakkht Ishq."  He has directed Salman Khan in "Kick" (2014) which was Khan's highest grosser for date.  He produced and wrote script for "Household" (2010) which launched the most successful franchise in Bollywood with several sequels manged by his production company.   He wrote the story for a Marathi script, "Lai Bhaari" (2014). He has also produced such memorable films as "2 States" (2014),  "Highway" (2014),  "Tamasha" (2015), "Rangoon" (2017) and "Super 30" (2019).  I have blogged three of his movies that left a strong impression:  http://www.therealjohndavidson.com/2014/07/2-states-new-favorite.html and  http://www.therealjohndavidson.com/2016/02/tamasha-wonderful-story.html and http://www.therealjohndavidson.com/2021/02/super-30-puts-focus-on-education.html

The director and one of three writers, Nitesh Tiwari has done a few outstanding films  including "Bhoothnath Returns" (2014), "Dangal (2016) and "Bareilly ki Barfi" (2017).  Piyush Gupta  has worked with Nitesh on "Ittefaq" ( on the scripts for "Bhoothnath Returns" and "Dangal"  The third writer Nikhil Mehrotra also helped write "Dangal," but also wrote "Banjo" (2016) and "Ittefaq" (2017).  The three get along so well they are collaborating on "Panga" (2020) which is directed by Nitesh's wife, Ashwinny Iyer Tiwari.

Music which is mostly unobtrusive was provided by celebrated Bollywood composer, Pritam Chakraborty. He has composed for such films as "Jab We Met" (2007, containing one of the best romantic songs of Bollywood), "Life in a Metro" (2007 where he on screen as playback singer), "Rajneeti" ( 2010), "Yeh, Jawaani Dewani" (2013), Ae Dil Hai Mushkil" (2016) and  "Dangal" (2016).   A key playback singer he uses a lot including in this film is Arijit Singh who is my favorite male singer.  Dancing is more celebratory.

The cinematographer is Amadlendu Chaudhary who got his start in the Marathi film industry including India's Oscar nomination, "Harishchandrachi Factory" (2009).  One Bollywood movie was "Stree" (2018).

The editor, Charu Shree Roy got her start with shorts.  As a writer, director and editor she won an American film festival award for "Chasing the Rainbow" (2013).  She won an editing award for the feature, "Lipstick under My Burka" (2016).  The editing for "Chhichhore" is tricky with heavy use of flashbacks and she was nominated for an award.

Sushant Singh Rajput played Anni, the protagonist as the father and in flasbacks as the younger student.  As noted earlier he committed suicide only a few months after the release of this film.  He was a National Physics Olympiad winner and cleared as many as 11 engineering entrance exam.  He was very popular in a tv series and his first feature film was "Kai Po Che."  Other films included, "Detective Byomkesh Bakshy!" (2015) and  "M. S. Dhoni:  The Untold Story" (2016).  He will be missed.

There is a supporting cast representing the student companions and older versions who are very good.

For my experience this is a unique film very well done.  I saw it on Hotstar and am not sure where else it might be available.