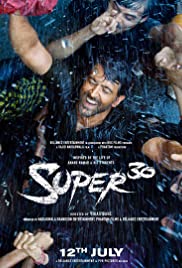 "Super 30" (2019) is a bit unusual in that it focuses on education.  India is a poor country, but has its share of intelligence.  Education is the force that turns intelligence into improved life style.

Hrithik Roshan takes on the role of Anand Kumar who as a young man had won a medal for mathematics and offered an education at Cambridge.  His father worked as a post master and made sacrifices, but could not raise or borrow money for the transportation and in short order Anand was reduced to humiliating poverty.  He was rescued when an older medal winner recognized him and hired him for his coaching school.  In India a prize education was at ITT schools but admission was very intense.  Schools had formed to provide coaching to boost success.  This was where Anand was hired and he proved to be the key attraction for the school.  He became upset that this education was only available to the very rich.  He decided to start his own coaching school and offer it for free for the poor.

Education of this type was big business and there was resentment.  Rich parents wanted Anand as the best chance for their children to get admitted to ITT, but he would only accept poor children.  During the course of the film business forces (assisted by corrupt government officials) took serious measures to close the school.  When what seemed like unethical measures didn't work, the efforts became more extreme.

Poverty is not just a lack of money and for the students it is also meant a lack of confidence.  Anand took measures to overcome and by the end of the film all his students are able to gain admission  to ITT.  He had accepted only 30 students (one exception) and they are the ones who are the Super 30.

Anand Kumar is a real person, born in 1973, the son of a postal clerk.  He attended government schools where he developed an interest in mathematics.  As he graduated from high school he had published an article on number theory in Mathematical Spectrum that drew enough attention that he was offered a spot at Cambridge University, but was unable to afford the transportation costs.  He became involved in coaching mathematics and his teaching methods drew hundreds of students who could afford the high expense.  In 2000 he was approached by a poor, but gifted student that pricked his conscience.  In 2002 he offered what came to be known as the Super 30 program for underprivileged, but gifted students for free.  He was subjected to smear campaigns but his students achieved high admission rates to the world famous Indian Institute of Technology.

Music was written by Ajay and Atul Gogalval, a brother duo who have composed for such films as "Agnepath" (2012), "Sairat" (2016) and "Zero" (2018).  They have composed commercial jingles, ballets,  and an international chart album for Ganesha Symphonic Chants.

Hrithik Roshan is a well established star noted for action and romance films.  He is also considered the best male dancer in Bollywood and he is very impressive.  In this film at different points his students dance for joy, but he does very little, showing he wants this film to focus on education.  As for action, this time around he is beaten up a few times and never really adopts his action repertoire.  I didn't like him at one time, but gradually appreciated he has a good range of acting (and his dancing is really fabulous).  Some of my favorite Roshan movies include:  "Kabhi Khushi Kabhi Gham..." (2001) "Lakshya" (2004),  "Koi...Mil Gaya" (2003) Jodha Akbar" (2008 providing Aishawarya Rai her first screen kiss), "Guaazrish" (2010), "Zindagi Na Milegi Dobara" (2011).   His most unusual role was as a quadriplegic and is covered here:  http://www.therealjohndavidson.com/2013/10/paralyzed-men-in-4-foreign-movies.html

Teaching like anything else settles into routines.  Too many become complacent.  The wealthy have advantages denied others, even those of above average intelligence.  Anand Kumar opened the door for talented individuals lacking funds for necessary education.  We are all better off.

Available on Netflix and probably a DVD can be found in most large cities.