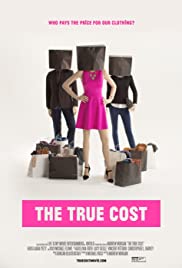 As I write this my attention is split with the impeachment trial.  They are connected.  Big money has convinced enough people to take extreme measures to preserve a way of life.

"The True Cost" explains how we have access to cheap clothing, but at a cost most of us are totally unaware of.  Getting at the root causes is a long process and literally millions are involved.

One aspect most of us have some awareness is cheap foreign labor.  As the memory fades we are reminded by disasters such as the one in Bangladesh.  Defenders state that bad as things might be in Bangladesh, the women should be grateful for the opportunity offered.  We become aware it is not just cheap labor, but also the lack of regulations to protect the workers.  As one commentator pointed out sewing is not a skill that is associated with life threatening danger, but lack of building requirements have proved to be dangerous.

Another area of concern is the use of toxic chemicals.  This is done in the United States to control pesticides in cotton fields, but also around the world where regulations are less rigid.  Chemicals are used to treat leather and other fabrics, with the overflow reaching water sources.

One bright spot was offered by farmers of organic cotton    They acknowledged that many people were concerned about chemicals in their food source, but felt clothing was no threat.  It was pointed out that skin as actually our most vulnerable organ. The movement to organic food is being extended to clothing.

The root cause really boils down to unbridled capitalism that caters to the greed of a small number of people.  To accumulate lots of money you need to see something, usually lots of something with ideally a large profit margin.  On one hand that requires to keep the cost low.  On the other hand it is necessary to create a large demand.  You can play around with the price as the lower the price the more demand.

Creating demand is a big subject in itself, but generally promote the product (or service) so that people are motivated to want it.  In the case of clothes there is an easy to identify need because of weather and modesty.  But that demand is not enough so the world of fashion attempts to convince us that we need to look good (to get a job or a mate).  We also are convinced that old styles need to be replaced.  We are encouraged to throw away old clothes.  Of course parents usually pass the clothes to their younger children.  We have learned to disdain hand me downs as a mark of poverty.

Making a profit requires low cost and a selling effort.  Those with money and resources are always trying to find ways of cutting costs and increasing demand.  Capitalism teaches us that the purpose of a business is to make a profit.  Originally we had to satisfy a need, but we have learned to develop hidden desires such as to out-do our neighbors (friends, co-workers and even strangers).  We have become a very wasteful society that compounds many problems.

Unbridled capitalism is focused on profit.  Keeping down costs makes it easier to sell.   Promoting consumerism also helps to sell.  This leads to buying things we really don't need and throwing them out in order to buy something else.  Keep up with the Jones.

The consumer can help change things by asking questions and demanding change by their choices.  The government can make regulations to restrain capitalism.  Governments can decide whether profit is the top priority and global welfare.  Labeling that includes country of origin, union or not, organic.

Traveled to Bangladesh, Cambodia, India, Haita and around United states including farms.

Michael Ross is the producer, editor and shares the cinematography.  He works mainly with documentaries such as "After the End" (2013) and "Here for Now" (2012).

Andrew Morgan is director, writer and share cinemetograhy.   He is a socially conscious film maker who has done such films as  "After the End" (2013) and "Here for Now" (2012).

Duncan Blickenstaff composed the music and has provided music services for a number of films including for the director and producer.  More well known films he has helped include "Moneyball"  (2011), "Life of Pi" (2012) and "The Age of Adaline" (2015).

You can read about my thoughts on the impeachment when it was in session.  Many of the same factors were in common with big money steering public sentiment.   http://www.therealjohndavidson.com/2021/02/impeachment.html