The Heartbeat of Wounded Knee

Not to be confused with "Bury My Heart at Wounded Knee" by Dee Brown. "The Heartbeat of Wounded Knee" actually covers indigenous history from well before Christopher Columbus  up to about 2018 although more focused since 1890.  Treur prefers to use the term "Indian" intsead of native, aboriginal or indigenous, but also frequently uses the specific tribal name, often in more than one form.

David Treuer, born on a Minnesota reservation went on to earn a PH.D. in anthropology and teach literature and creative writing he offers some perceptive insights.  Indians were not as backward or as noble as they have been depicted.  They were however beaten down.  David's father was Jewish and had survived the Holocaust.  His mother was Ojibwe, had trained as a nurse and became a lawyer.

Indians were in North America thousands of years before European discovery.  They were many tribes with many languages.  They fought among themselves and formed alliances.  They had in fact developed agriculture and we have adapted much of it such as corn, squash, etc.  After they caught on that there were different European "tribes" they were able to play one against the other, until the American Revolution.

A big game changer was the horse.   Introduced by the Spanish, the Indians stole horses and mastered riding.  This increased their mobility  (hunting, trading, etc.) and also their ability to resist the colonizers.   Read more:  http://www.therealjohndavidson.com/2016/05/north-american-indians-domesticate-horse.html

The Louisiana Purchase in 1803 allowed Thomas Jefferson to shift Indians to the west.  Some, such as the Seminoles in Florida refused to go. 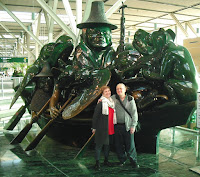 Treuer covering the Pacfic northwest as part of a survey of Indian tribes across the United States.  Reminded me of university project that I confess was confusing to me at the time.  I was to focus on potlatch used by several tribes in the area.  It seemed insane that various tribal leaders would compete by giving out more items than the others.  I now see that as similar to rich men today proving who is more important by how much they can spend.  The other part that confused me was that the government made potlatches illegal despite the Indians wanting to keep them.  Before and since then I had been interested in the Haida, particularly their art.  It was thrilling when the government decided to put some contemporary Haida art on our $20 bill.  Stephen  Harper in an effort to boost Canada's military image took off the Haida art from the $20 bill and replaced it with Royal Canadian Mounted Police.  The photo to the left is of the original Haida artifact constructed under Bill Reid that was used for the bill.  My wife and I like many others thought a great location (Vancouver Airport) for photos.

Indians were relocated for convenience of settlers, but in one instance the Osage tribe were clever enough to retain mineral rights and when oil was discovered in their section of Oklahoma they became the richest people per capita in America, but they were undermined.  Read more http://www.therealjohndavidson.com/2018/01/killers-of-flower-moon-bit-of-history.html

Ely Parker, a Seneca Indian and educated as an engineer attempted to organize the Iroquois confederacy for the Union Side for the American Civil War, but was rejected as not being American.  Ulysses S Grant vouched for him.  Ironically Ely helped to draft the articles of surrender that ended the Civil War.  When Grant became president there were some friendlier political policies.

Part of the friendlier government was strategies to help assimilate Indians.  One of the outcomes was boarding schools where young children were separated from their parents and forced to speak English and learn history from the American perspective.  Similar strategies were enacted in Canada with similar sad results.  Eventually boarding schools were abolished on both sides of the border, but still the results linger.

A law was established that Indians could not be taxed on their reservations.  Seminoles in Florida were perhaps the first to test this in 1976 by selling cigarettes, but later moved into gambling, first with bingo and later with casinos.  Many tribes jumped on the bandwagon.  A perhaps unexpected offshoot of this was that many tribal leaders wanting to keep more the profits ruled that some people were not really Indians and were excluded.  The author points out that blood had been imposed against Indians when it suited the government.  The bottom line is that it is human nature to want to concentrate wealth in as few hands as possible.  The author discussed that it really is more than just blood that should define Indians and other factors include language and culture.

He covers the Standing Rock protests that ended in failure.  In the end it is an American problem that includes Indians.  Naomi Klein suggested that environmental groups should align themselves with indigenous groups that not only share common goals, but have different tools to enact change.

They survived by first resisting, but in the end settled in by fighting for the Americans in the many wars (including the American Revolution for some tribes).  AIM (American Indian Movement) looked at the Black Panthers as a model as they made things happen and opted for violence, but also boosted education.  There are now opportunities to learn tribal languages and Indian history.  Indians are adapting.

There are many events depicted and different perspectives including many from his own life.  I would like to close with a quote used by the author from John Adams in a letter to Thomas Jefferson in 1816; "Power always thinks it has great Soul and Vast Views beyond the Comprehension of the Weak."