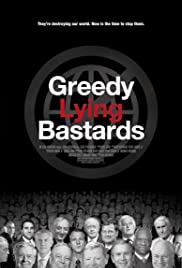 Now that I have your attention, who are the greedy lying bastards?  In short they are climate change denialists.  Most of us have a bit of stake in the fossil fuel industry as we are comfortable with our gas guzzling cars and maybe (as was my case a few years back) part of our pension plan was geared to the fossil fuel industry.  Still most of us are complacent and too many uninformed or worse, misinformed.  On the other hand there are others whose wealth is intricately tied to the big oil companies and they feel threatened by any suggestion that they are part of a problem and might be expected to solve the problem.

Part of the lying was revealed as I researched this film on IMDB.  IMDB  (International Movie Data Base imdb.com must be recognized as an information tool because there was a strong attempt to lower this film's ratings and cast aspersions on its credibility.  This was the same sort of thing encountered in researching the two Al Gore films.  There are reviews ridiculing the idea of climate change and/or the quality of the film.  These are balanced to some extent by high ratings and rave views, but the thrust of the film is somewhat blunted.  Except some of us have become used to the idea that the GREEDY LYING BASTARDS are doing their best to keep us in the dark.

The film ends after the 2012 election, but assures us the greedy lying bastards hadn't given up.  In fact the film has already shown us the Koch Brothers, Rex Tillerson, Kelly McEnamy and others that helped elect Donald Trump and support his big lies.

It depicts a few disasters that are attributed to climate change, but the bulk of the film is concerned about the battle between scientists and climate denialists.  It is a familiar story, but with details up to date for 2013.  The science is as I assume basically correct, but they run up against big money.   One loop portrayed was from how courts had been loaded with picks of the big money denialists, like the Koch brothers helped result that Citizens United was able to win their case that corporations could be considered people.   Justice Clarence Thomas was implicated as a participant in Citizens United policies.  Other laws enabled even more money to be directed to favorable politicians.  Senator James Inhofe is able to smugly ridicule the notion of climate change in the Senate.  George W. Bush is shown as supporting efforts to slow changes.

Two men behind this film are Chris Scott Rosebraugh and Patrick Gambuti Jr.  The battle has been going on for a few decades now and the scientists and environmentalists are making some progress, but the greedy lying bastards are still using their resources to slow down the process.  Either the science believers will win or we will all lose!

Naomi Klein had some thoughts on the battle.  Read more; http://www.therealjohndavidson.com/2018/05/naomi-klein-writes-another-insightful.html