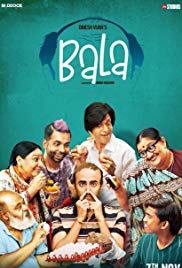 Discrimination has been a concern of movies since the beginning.  What it boils down to is humans identify something different about someone and assume it represents something either inferior or threatening.  When it comes to seeking a mate there has always been obstacles.  Appearance is truly the first impression people gain of one another.  Many of us feel we do not discriminate, but actually we all do.

Fortunately some movie makers have decided we would all be better off if there was less discrimination.  Merit supersedes all the various levers of discrimination.

It is how we maintain our self worth and justify ourselves.  Race, religion and gender provide lots of material, but when we drill down we learn that many other groups feel discriminated against. Appearance is key to succeed in love and life.  Conflicts drive movies

Baldness is common among those over 50, something easily noticed--for me looking at a mirror to see thinning hair.  Although in some circles shaved heads are concerned masculine, (even in India) in other circles baldness is embarrassing at the least.

Actually the four movies are all sympathetic by pointing out the ridicule (and humiliation) suffered by those prematurely bald.   By prematurely it is meant before marriage.  It is accepted that older men tend to baldness.  Hair has been linked to masculinity such as with Sampson.  It also is part of femininity.

First viewed was a copy of the original.  "Ujda Chaman"  written by the same writer, but left a more polished feeling as he probably had more access to money and of course experience.  The moral is don't judge by appearance.  This was a Bollywood production coming out in the same time frame as the more publicized "Bala".  It points out that discrimination victims (specifically male) can be prejudiced against others.  As in the three male centered films the bald men feel discriminated because they cannot attract a beautiful bride.

Second was "Gone Kesh" (translate to "hair gone)" about a female suffering from alopecia, a disease of hair falling out.  I first heard of it with a Toronto Raptor player Charlie Villanueva.  He had no hair or eyebrows but was a top player.  He also was very conscious of  discrimination and lack of self confidence.  He made a point of letting youngsters join in at many of his home and away games.

Vilpin Sharma played the father who often plays bad guys or gruff fathers, but here a more gentle father.  In the second half the family encounters a taxi driver who is bald and learn he chose after seeing "Agneepath"--a fashion statement, but their reaction is to contrast their own unhappy situation with that of the taxi driver.  After many rejections for an arranged marriage and two with unsuitable grooms, a shy man gets enough courage to approach Enashka and by a flukey coincidence sees her without a wig.  He looks stunned at first, but later admits his love.  Her parents had been saving money for a trip to the Taj Mahal, but have sacrificed much to ease the pain of their daughter.  At the climax Enashka is seen in pubic without her wig and has a meltdown, but her father and boyfriend encourage her to do the dance contest.  She surprises everyone by taking off her wig and entering the contest.  The denouement is set a year later and all is well, but with a slight surprise.  Ayanna Pressley, American Congresswoman has decided to show herself without a wig and does so with dignity and style.

Third seen is the Kannada (language) original--(2017) "Ondu Motteya Kathe" (which translates to  "Story of an Egg."  The plot is not quite identical to the copy.  The protagonist is a Kannada teacher and so the writer promotes some of his language concerns, including a film star.  The Director and writer is Raj B. Shetty who also plays the lead.  Also credited writing "Ujda Chaman."  In this version the second woman is only interested in getting him as a customer for her hair recovery business, but in the Hindi rewrite they use a student who is sexually aggressive but drops the hero after she gets a pass to graduate.

Although this was the film that inspired this blog it was the last I actually saw and only because my daughter, Heather gave me a subscription to Hotstar, a streaming service specializing in films and sports from India.  Ayushmann Khurrana has seen his career boom with a series of well accepted roles. The hero is sensitive after childhood sweetheart dumps him because of balding head.  Ironically he works for a cosmetic firm that is very concerned about appearances including baldness and darkness.  Several desperate attempts to deal with his baldness lead to interesting plot developments culminating with his former girlfriend who is a lawyer defending him against a breach of marriage contract because he lied about being bald.  Khurrana has appeared with both leading ladies in notable films involving shaming.  Yami Gautam and Bhumi Pednekar are both excellent actresses and add to the impact of this film.  Khurrana's character also plays a standup comic and he ends the film, fully bald pointing out that appearances whether baldness, fatness, darkness, shortness are not as important as character.


It is common in most countries to borrow successful scripts from other languages.  India certainly does, but they have a closer source with multiple languages with viable film industries.  Original ideas/stories occur in their many different languages.

In some cultures baldness is viewed differently.  Yul Brynner wore baldness as a symbol of strength.  Black athletes are noted as masculine.  Appearance will also be a factor in how we judge others, but we should realize that appearance is superficial.