My Mister is a slow drama with emotional impact 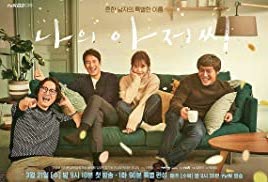 Just finished watching my 10th or so Korean mini-series and would like to caution my readers to be careful--they are very addicting.  A normal Korean format stretches over 16 episodes for a season.  With "My Mister " (2018) the episodes are about one hour and fifteen mintues each which is a lot of time to fill.  They use a lot by repetition, but it is really a heavy story.   You might get bored in the first few episodes, but if you stick with it you will feel compelled to find out more.  It is very highly rated.  This is a DRAMA, with some comic parts and even some romance.

Office politics are too often personal.  Somebody doesn't like somebody else and they try to form alliances.  In this case one superior is having an affair with the wife, Kang Yoon Hee of a manager, Park Dong Hoon tries to set it up so the manager can be fired.  A new temporary staff Lee Ji An sees an attempted bribery setup and messes it up.  These two events evolve into a complicated plot involving many backstories..

Modern technology plays a big role, including wiretapping.  The viewer is in on the wiretapping and it adds to the suspense and speculation.  You might think it is dragged on too long, but as a plot device it is very handy.  Who knows what and who doesn't?

Many characters add to the complications.  Park Dong Hoon has a colleague with a similar name that is also part of the office politics.  Park Dong Hoon has two brothers that have their own stories, but do intertwine with the main plot in different ways.  The three brothers (who are not very much alike) like to gather at a local restaurant to drink with the owner who once had a love affair with the best friend of Park Dong Hoon.  Lee Ji An has a grandmother who has to be hidden and also a loan shark who torments her.  There are even more characters, but they all do fit in.  A relatively happy ending for both the main characters and satisfying for the viewer, but maybe not what was expected.  No sequel planned.

An added element is use of the Korean sign language.   It helps us to realize that one of characters is not as coldhearted as we might otherwise think.

Mournful songs gently in the background are repeated and do reinforce the mood.  Korean movie music is becoming more common in my musical library.

For most of my readers the cast and crew names will not ring any bells, but I would like to mention a few as I continue with my addiction there will likely be repeats, especially with high quality.  You will feel for the characters and their emotional dilemmas.

Wok Suk Kim, director has been doing tv. mini series since 2008 and has been received national awards.

Park Hae Young, writer with only his third series.

Lee Sun-kyun plays the lead character and is a veteran actor with awards.  He played a prominent role in "Parasite" (2019 http://www.therealjohndavidson.com/2020/09/parasite-breaks-oscar-tradition.html) and was the lead character in my favorite black comedy, "A Hard Day" (2004).

Lee Ji-eun played the young temporary staff worker and the main female lead.  She  has been in many films and has also composed and sang background for other movies including "Crash Landing on You" (2019 http://www.therealjohndavidson.com/2020/02/crash-landing-on-you-very-addicting.html.

Ji-Ah Lee plays the protagonist's, cheating, lawyer wife (she is not all bad).  Some of her education was in California.  She speaks Korean, Japanese and English.

Jeon Gook-Hwan played a company director.  He played the father of the male protagonist in "Crash Landing on You" (2019).  Another quality film he was in was "Silenced" (2011) about abuse in an institute for the deaf.

Korea has very cleverly identified culture as an economic export.

Another viewed series that impacted me:  http://www.therealjohndavidson.com/2021/04/heavens-garden-cheonsangui-hwawon.html