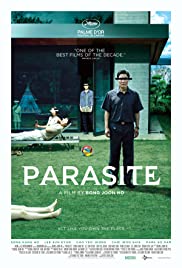 The buildup to this movie has been long.  It was predicted months in advance that it would win at least one Oscar.  Anyone who saw it instantly added it to their top prediction.  This despite the fact that a foreign subtitled movie had never won the best picture award. For myself, it took only a few minutes to determine the hype was well deserved including all three Oscars.

The plot moves pretty steadily at the beginning  and while admiring the cleverness the last moves seem predictable.  But it was only half over.  Before too long twists occur.  You become increasingly conscious of class differences.

The set was designed with the script in mind.  Bong Joon Ho explained he wanted eavesdroppers to be seen and various actors seen in the background going up and down stairs.  The design was an architectual disaster.  He likes long takes with simultaneous action visible, some meant to be distracting.

The theme is the clash between classes.  We see one family that scrounges to get by.  They were getting paid to fold pizza boxes and were criticized for some sloppy work with a cut in their pay.  Somehow they turned  it around to get full pay plus a conventional job.  They cannot escape their lower class origins with one signifier being smell.  They ponder how to deal with this (a young rich boy noticed the same smell from clothes of their "new" staff.  It turned out the smell came from living in a basement apartment.

Although life seems to be going smooth for both families, circumstances change.  At one point the Park family goes away on a family trip, but it is cut short by the weather.  The Kim family gathers in the house all together and talks about a great deal they are enjoying.  The Park family comes back unexpectedly while the poorer family hides, but overhears what the Park family really thinks of them.   A few developments and the atmosphere turns murky.

Bong Joon Ho "Once you overcome the one inch barrier of subtitles you will be introduced to so many amazing films."  While in university majoring in sociology he became involved in demonstrations and felt the sting of tear gas.  One way of financing his education was with wedding videos.

Bong Joon Ho wrote, directed and produced, at first shorts.  An early film, "Memories of Murder" (2003) won many awards including at international film festivals.  "The Host" (2006), a horror film garnered international attention with both awards and box office.  In 2008 he became involved as a writer and director of a Japanese film, "Tokyo!"  "Mother" (2009) was a mystery film winning more international awards.   In 2013, Bong Joon Ho wrote, directed and produced a major English language film "Snowpiercer"  with American stars (Chris Evans, Ed Harris, John Hurt, Tilda Swinton) and crew mixed with Korean, American and Czech technicians.  In 2017 he did a joint American-Korean production, "Okja"  His projects are far apart as they require a lot of details.  "Parasite' was released in 2019.  He is among only 9 directors who have won 3 Oscars for the same film--best director, best script and best film.  He is the second Asian director to win an Oscar for best      director after Ang Lee.

Woo-sik Choi plays the son Ki Woo who uses an unexpected opportunity to benefit his whole family.     Earlier he appeared in "Okja" and  "Train to Busan" (2016 a well done Zombie movie).

Hye-jin Hye played the displaced maid.  She had been in"Crash Landing on You" (2019-20) playing the prospective mother-in-law to the main hero and always was meddling.

Meyeong-hoon Park played the head of the wealthy Park family.  He also played in "Crash Landing on You" in his next film.   That was one of my favorite tv. mini series--check it out:  http://www.therealjohndavidson.com/2020/02/crash-landing-on-you-very-addicting.html

All parts fit well together.  The plot is attention getting and before you realize it you are aware of relations between social classes in a way you might not previously thought of.  If this is one of your rare subtitled movies hopefully it will encourage you to explore more as there are many gems worth seeing.

As usual the bolded titles are ones I have seen and in most cases are worth the effort to watch.