For the last few days North Korea has managed to dominate the news.  Over a movie, that otherwise would likely not have a record setting box office nor be nominated for an Academy Award.  They seem obsessed that anyone would dare say something bad about their "beloved leader." 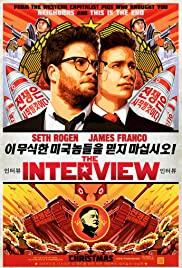 Normally we all fear being the victim of insanity and it seems the Korean leader makes an effort to project an image of insanity.  If it is not possible to have a rational discussion, we must protect ourselves.

Democracy requires people with power to be accepting of criticism.  Yet, each one of us is sensitive to criticism and and can be vindictive.  I don't know how we should expect to change human nature.

Sony, as a private company is vulnerable to a nation with much greater resources.  One of the most important functions of government is to protect its citizens.  Some hard decisions have to be made.  How can the U.S. government retaliate without causing more problems?  How can they afford to ignore this threat?

Alan Dershowitz suggested the best way would be that we assure people that if they want to suppress  our First Amendment rights the offending item will be viewed by more people using the example of "The Satanic Verses."  It takes a little courage, but that is the price of freedom.

There are many dictators around the world and in fact dictatorial tendencies are even further spread, but knowledge is the best remedy.  Really most of us were unaware of the movie, "The Interview" and most that were aware had no plans to watch.  Now there is great interest

Bullies will keep doing what works.  There are many enemies with more resources than North Korea who are looking for ways to hurt the West.  The Republicans have offered to encourage theatre owners to show the movie and they will urge their supporters to watch it.  On the surface seems smart and commendable.  Hopefully they won't be the only ones giving support.

Charlie Chaplin generated controversy with "The Great Dictator."  Amongst many protesters I recall was J Edgar Hoover.  Events changed perception of the movie.

Freedom is not free.  The government has to make some decisions, but the rest of us have to stand up.  It is a shame that it is about a piddly movie, but really it is not.  It is easy to spout platitudes, but every now and then we have to live up to them.  We know the North Korean citizens have no freedom to criticize, so in a sense we need to stand up for them.

February/2020 Actually saw the movie.  Not a class movie, but a lot of crude laughs.
Posted by John F Davidson at 8:45 AM