Ghost movies like science fiction turn a lot of people off and on the other hand some people love them.  At bottom, ghost movies are fantasies or contrivances  that allow us to get a different perspective on life and if we let ourselves we can find something of interest.

There is an element of scariness, but also humour and mystery  There are always skeptics who doubt the sanity of whoever is suggesting there might be a ghostly explanation.  The ghosts are present because something has not been resolved.

Technology advances to scare us more or at least to make us realize the depicted situation is not normal such as  bodies passing through solid objects and one another, decapitated talking heads, speeding around in a flash.  We marvel at the special effects.

"Here comes Mr. Jordan" from 1941 is not exactly a ghostly tale, but as one of my all time favorite movies I will stretch a point.  It is a comedy murder mystery with a soul mistakingly removed from a boxer's body and an effort to find a new body.  It is not easy to find a new body and there are a lot of comic and romantic adventures along the way.  It has the humans not aware of ghostly helpers and the communication problems when the hero wants to convince his old manager (James Gleason got nominated for this role) and his new love that he is not crazy.  Evelyn Keyes, Claude Rains and Robert Montgomery make up a wonderful cast in the well written script.

"The Uninvited" with Ray Milland  in 1944 was touted as Hollywood's first serious ghost movie.  Previously ghost movies were either humorous or given a rational explanation.  In this movie the ghost is real.  You did see a ghostly figure and it turns out there is an unresolved family matter.  The  black and white can actually be a bit scarier.  Victor Young wrote the background music and introduced the classic "Stella by Starlight." 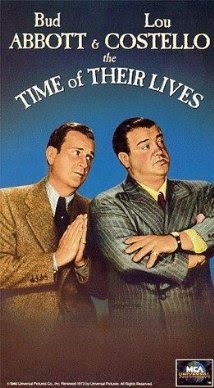 Abbott and Costello were noted for really corny slapstick humour, but a favorite ghost movie was "The Time of Their Lives " released in 1946.  I feel a little guilty confessing that as a youngster I watched dozens of their movies using my newspaper carrier earnings.  The unresolved issue in this feature was that our hero was wrongly accused of being a traitor in the American Revolution and had to find a way to redeem his honour before he could be reunited with his loved one in heaven.  Maybe not art, but a very enjoyable movie.

"Canterville Ghost" was originally conceived by Oscar Wilde and updated for a World War II movie.  I  recall very vaguely a detached head of Charles Laughton and that as a youngster more than any other movie this started an appreciation of him.  Margaret O"Brien at about age 7 is his real counterpart and is praised for her role.

I had watched a tv version of "The Ghost and Mrs. Muir "many years ago when I lived in a one channel community (Haliburton), but had not seen the movie.  The black and white version film did not emphasize any of the ghost proofs (disappearing in smoke, going through solid materials).  A romance where you had to wait until the very end for some type of consummation appropriate for a ghost movie.  The story relates to some of the frustrations where the prospective lovers never seem to meet at the right time.  Well done.

"Ghost" with Patrick Swayze and Demi Moore is considered a classic love story.  It used a lot of penetration of solid objects to make its point and was scary in parts with violence between humans, ghosts and each other.  The "Unchained Melody" music played at key times demonstrated the frustration of not being able to communicate, but somehow love conquering anyhow.  The movie had problems getting organized as at first the writer did not appreciate the director (who was more known for youthful comedies) and over a dozen actors rejected the male lead.  One of the rejections apparently was Bruce Willis, (husband of Demi Moore) who thought the movie would fail at the box office.  It won Oscars for Whoopi Goldberg and writer Bruce Joel Rubin and grossed over $500 million worldwide.  Bruce Rubin commented in a special feature that he was originally inspired by a line in Hamlet where Hamlet's father's ghost asks for revenge.

"The Sixth Sense" is not a typical ghost movie, but deals with dead bodies, many who don't know they are dead. The young boy feels tortured because he can see dead people.  Not much in the way of ghost proofs.  Known for one of biggest twists of all movies; it doesn't deserve a spoiler for those who have not watched it.   Bruce Willis, Haley Joel Osment and Toni Collette--key figure is writer/director M Night Shyamalan.  Classed as a horror film there is relatively little violence--the idea is frightening.

"Odd Thomas" used the term "boldac" for dead people, but very ghostly and with a new high tech design.  Unlike other ghost movies though the hero, Odd Thomas not only sees dead beings, but has friends who although they can't see, accept that he can.  One ghostly proof was walking on water.  Odd Thomas gets involved in a major apocalyptic event and saves the day but at a cost.

"After Life" was a Japanese film about recently dead who had to decide what one memory they would take to eternity.  What memory would you want to savour?  The point might be that we should all remember the really important things in life.

"Bhoothnath" with Juhi Chawla and Amitabh Bachchan with a cameo appearance by Shah Rukh Khan.  A house haunted by a ghost who had unresolved family issues tries to scare a young boy, but eventually befriends him.  Lots of special effects.

"Bhoothnath Returns" from 2014 is noteworthy on a couple of fronts.  The viewer is taken to ghost headquarters where ghosts line up for the next life and are told that it is far easier to come back as a mosquito than as a person.  Amitabh Bachchan who in the previous movie failed to scare a young boy is laughed at and decides to redeem himself back on earth.  Soon, as with other ghost movies he befriends a young boy who can see him and does a number of good deeds before another ghost shames him by pointing out that India is poor because of a lot of corrupt politicians.  Bhoothnath is able to communicate with his voice, but not his appearance and performs acts of levitation against humans.  He then decides to run for political office.  The main theme of the movie seemed to be that in order to deal with poverty and corruption everyone should vote.  Boman Irani this time plays the bad guy overcome by the ghost.  Shah Rukh Khan makes a brief appearance to support the notion of voting.

"Hum Tum aur Ghost" with Arshad Warsi and Diya Mirza.  This movie has a low IMDB rating, but it would be enjoyable for those who can put themselves in the right pretend frame of mind.  The idea itself originated with Arshad who was able to get financing and help write the script.  I have seen him in a number of movies and now appreciate he has excellent comic timing.  Boman Irani is a very good match for Arshad. and this is the second movie (the other is "Jolly LLB") this year where I watched the two go at one another creating a lot of laughs.  Having ghosts just adds an element to the usual family drama and romance elements.

When you watch too many ghost movies it might make you more inclined to believe them.  My belief is that there will always be unexplained aspects of life.  Everyone is welcome to take whatever comforting view they can justify.  I also see them as mechanisms to tell an interesting story.
Posted by John F Davidson at 12:58 PM