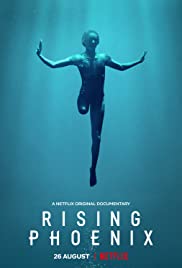 Essentially this movie is about the Paralympic Games, but in reality it is about disabled people carving a bigger place in the world.   It is set up to highlight a few athletes from different parts of the world and to include some history of the movement.  Every one has a unique story.  The athletes have "qualified" for the games because of war, accidents, birth or disease.  They have each struggled to deal with their limitations and then to stretch their abilities.  Perhaps their biggest handicap is the perception of others.

The film inspired me to do some research and draw upon my own memories.

The history starts with Dr. Ludwig Guttmann who lived in Germany where as a Jew in the 1930's he was forbidden to work in public hospitals.  He was able to be a neurosurgeon in Breslau and after Kristallnacht there was a rush of patients that he had to answer for the Gestapo the next day.  That was considered a warning.  He escaped, and was able to smuggle a few children whose parents had already been taken away.  In England during World War II he was able to offer his medical services and volunteered to work with  seriously injured soldiers that other avoided as spinal injuries were difficult to deal with.  He was set up at Stoke-Mandeville with a spinal injuries centre.  Dr Guttmann instituted some programs such as turning over patient bodies every two hours to prevent bed sores.  He developed all sorts of physiotherapies and exercises.  He discovered that sports were motivating and advanced from recreational play to competition.

London was the site of the 1948 Olympics, the first after the war.  On the same day Dr. Guttmann Dr. initiated the first Stoke-Mandeville Games which consisted of 16 servicemen and women recovering from injuries competing in archery.  In 1952 some Dutch service members joined in to make it the International Stoke-Mandeville Games.  His daughter who appeared in the film pointed out that Paralympics does not refer to paralyzed athletes, but is meant to denote Parallel  Olympics.

It did not really become officially the Paralympics until the 1960 Rome Olympics.  400 athletes from
23 countries competed and it developed in parallel to the Olympics every 4 years.  In 1976 the Winter Paralympics were held for the first time in Sweden and also continued every four years.

In 1960 the International Sport Organization for the Disabled set up to expand opportunities for other disabled athletes such as visually impaired, amputees, those with cerebral palsy and paraplegics.   They tackled the problems of adapting sports for the disabled and classifying degrees of disabilty to level the competition.  The deaf had already set up their own organization for international sports.

Each year more athletes, more countries and more sports.  More sports means that more disabled people can find something suitable for them.

1976 Olympics were in Montreal, but the  Paralympics were held in Etobicoke which later became part of Toronto.  I was working on a project that involved wheelchair basketball that at the time was dominated by the Israeli team.  They had been through a number of wars and the Israeli government made an effort to rehabilitate the many injured combatants so that no one was left behind.  My press pass enabled me to see many events.  The one that I remember best was the high jump for amputees where Canadian Arnold Boldt was expected to win.  There was a light rain, but nevertheless Arnold set a new world record (I believe he already held the record).  I could not have fathomed how a one legged person could jump over his own height.  This was the first Paralympics to include the blind.  A lot of people came to appreciate that people could always do more.

Russia did not want to admit they had disabled people and would not hold Paralympics.  The Paralympics were picked up in the Netherlands in 1980.   Dr. Guttman had died before the games and was honored.

There was a negative comment regarding the 1996 Atlanta Paralympics, however research reveals some positive movement.  It was the first time for international corporate sponsorship.  They also promoted cultural achievements by the disabled across disciplines.  For the first time intellectually disabled athletes had medal competitions.  Over 388,000 attended.  There had been a Congress before the game that discussed empowering disabled people around the world.  In the last few decades we can notice that buildings are more wheelchair friendly, but also governments are making a more conscious effort to cater to the needs of disabled people and to protect them against discrimination.

2004 Athens added more sports.  Media coverage for Americans was disappointing in that television camera crews didn't stay, meaning Americans had to wait up to two months for coverage, while other countries received live feeds.

The 2008 Beijing Olympics were hosted in a country with a history of denying disabilities.  But they took the challenge seriously and offered a competitive team, not only for their games, but for future games.  Competitors (and profit motivated media) were pleased with big crowds.  As usual the Chinese benefited from a greater awareness of what the so-called disabled could contribute.

2015 Parapan Am Games to Ontario and were well covered in media.  The famous CN Tower made their popular Edgewalk accessible for wheelchair and had Rick Hansen try it out.  The CN Tower had participated in the Pan American Games and Parapan Am Games.

For 2016 Rio Di Janeiro went through financial difficulties that threatened the Paralympics.  Some thought the Olympic committee must have dipped into funds that had been set aside.  A lot of last minute negotiations saved the games, but initially the athletes performed in front of mostly empty stadiums.  These was very disheartening for the athletes, however the local citizens finally heard about the excitement and began filling the different venues.  One scene from the film illustrates the power of crowds during coverage of bocce.  The athletes are very sensitive and officials were concerned they were bothered by the enthusiasm, but were assured that the athletes were craving the attention.

The Rider, where I used to work has had strong support for the Para-equestrian that became a part of the Paralympics.  We had been told that riding horses helps boost balance and confidence among many disabled people.  Competition gives a focus to some and has made many more aware of an activity that can enhance their lives.

A number of personal stories made the movie more memorable.

Jean Baptiste Alaize had one leg hacked off with a machete during tribal conflicts in his native Burundi of 1993 when he was only 3 years old.  He witnessed his mother being murdered.  Eventually he was adopted by a French couple.  He chose to be a long jumper.

Ellie Cole from Australia had her leg amputated below the knee at age 3.  She pointed out that in Australia everyone needs to learn to swim and that turned out to be a salvation for her.  She became a Paralympics swim champion.  She learned bullies like to pick on disabled students, but while she was in high school she threw her prosthetic leg at one and that stopped further aggravation.  Not sure, but believe it is her photo on the top poster.

Another Australian Ryley Batt had been born without legs and missing a few fingers.  He was encouraged by his father who had drive motorized vehicles and took him water skiing.  He gravitated to wheelchair rugby which is a very rough sport with athletes frequently knocking each other off their chairs.  Ryley became known as one of the toughest.  His team lost in London, but he lost weight, got more fit and was able to finally beat the Ameriacans in Rio De Janeiro.

Jonny Peacock was a British sprinter who defeated the world famous Oscar Pistorius for the 100 metres title during the 2012? London Paralympics before a packed crowd of 80,000.  Oscar's comments afterwards was that it showed how much the sport had developed.

A runner Ntando Mahlangu from South Africa explained how he felt liberated with a Cheetah blades.  He lived in a rural area which tend to be neglected for the disabled who tend to be hidden away.  Ironically he had a pet cheetah and sometimes trained with it.  Cheettah blades were invented by Van Philips a biomedical engineer who had lost his leg at age 21.  Unlike previous prosthetic legs it generates energy and has become the norm for many disabled athletes. Ntando won a silver medal in the 800 metres run.

Cui Zhe, a young Chinese woman born with disabilities recounted that her parents were poor and needed help to deal with her.  The Beijing Paralympics helped to galvanize more support.  Cui was a medal winner in power lifting.

Bebe Vio had meningitis at an early age and was lucky to survive.  Her parents consented to amputate her arms, thinking it would end the attack on her body, but it didn't.  Bebe took the pressure off her parents and agreed to a leg amputation a bit later that did seem to end the attack.  Her friends gave her the title of "rising phoenix." Bebe loved fencing and she found with the wheelchair version she could recapture much of the joy she had felt.

Tatyana McFadden became a producer for the film and likely one of the inspirational participants.  She was born in Leningrad, Russia,with legs bent behind her and for several years she walked with her arms.  Adopted to the U.S., she was unable to use a wheelchair, but after several surgeries to straighten out her legs she adapted.  She became a wheelchair champion at virtually every distance.  decided wanted to try cross country skiing instead of concentrating on the next Paralympics, but she had a personal motive.  She went back to Russia for winter Paralympics and won in front of her biological mother.  She has been an activist and is at least partially responsible for legislation providing opportunities for disabled athletes to participate in inter scholastic sports. She appeared on the Ellen DeGeneris show.

Prince Harry, identified as the Duke of Sussex made supporting comments throughout the film.  One comment was regarding the ambitions of Dr. Guttmann was that "he wanted to turn those individuals into taxpayers" meaning to become useful citizens.

The opening and closing ceremonies are big shows on their own.  Big time performers sing and dance, but one of the highlights are "disabled" performers that are very entertaining as dancers and singers.  You will also appreciate international good will.  One example pointed out was the Iraqui team near those athletes who were there because of war injuries incurred in Iraq.

Human resources come in many variations.  Until recently the disabled were written off unless they could adapt and had help.  Now they are being given more opportunities to contribute.  The Paralympics have opened society's eyes and we are all benefiting.  Sports lovers will find the alluring attraction of competition and skill.  All of us will feel inspired by athletes who have overcome difficulties most of us have never had to deal wit, not just physical, but perceptions of other people.

I have written many more details about the Paralympics and Parapan Am Games: