The Banishment, A Russian film to ponder 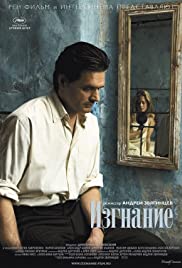 The Banishment was only the second feature for Andrey Zvyagintsev as director and on the first one he wrote the script.  For this one he searched for a suitable subject and finally hit upon "The Laughing Matter" by William Saroyan and in 2004 preparation for the film began.   I have not read that book, but it has been pointed out that the character of the leading woman has been changed. In the book she was portrayed as mentally unstable, but in the book she is less so.

Andrey felt his film would not be popular with Americans as it lacks physical action and requires a mythological sensibility and some introspection.  A lot of Russian films might fit that bill.  Check http://www.therealjohndavidson.com/2017/08/russian-movies.html which includes some other films by Zvyagintsev and Russian contributions to world cinema.

A key line near the beginning from Vera:  "I am pregnant.  It's not yours."  The husband, Alexander is very upset and at first walks away.  Later as she tries to explain herself he hits her hard enough to knock her to the floor.  In the second half we get a different perspective.  The main male character does not want to lose his children and is looking for a resolution that starts with an abortion.  He has two brothers, one, Mark is criminal and the other Robert is more sensitive.

The producer, Dmitry Lesnevsky and Andrey had agreed on a Swedish actress (who spoke Russian), but she was tied up for a key filming time.  The producer agreed to postpone for a year to get the key time of August and September in 2006 for filming exterior shots.

With an extra year for preparation they had to provide security for some mostly built properties Moldova, France, and Belgium.  Other crew and cast members chosen and prepared.  The script was tidied up.

Andrey Zvyagintsev, the director had been born in the Siberian city of Novisibirsk and started out to be actor on stage.  Moving to Moscow he tackled the film industry but could only get roles as an extra.  After 8 years of that a friend offered him a chance to direct with tv. programs.  He was given a chance to direct "The Return" () which won an award at the Venice International Film Festival.  He continued with short films, but also a succession of award winning films, "The Banishment" (2007), "Elena" (2011),"Leviathon" (2014) and "Loveless" (2017).  He has stated that his favorite author was Fyodor Dostoevsky which would help explain his preference for serious themes.  Of current interest is that he that in 2017 he had supportive words for Russian opposition leader Alexei Navalny.

Dmitry Lesnevsky, the producer, Moscow born had graduated as a journalist, but while in university with his mothr he had founded REN-Tv which became an independent and large tv production company where he became familiar with Andrey.  Dmitry gave Andrey the opportunity to direct "The Return"in 2003.  His films won awards and he moved on acquire a German Tv network which was later sold to Disney.

Konstatin Lavronenko who played Alexander had been spotted by Andrey on a stage play and made an impression.  However ten years later when Andrey was recruiting cast members for "The Return" Konstatin had given up acting for five years.  He played the strong lead in that film and won an award at the Venice Internatonal Film Festival.  Andrey did not think he would be suitable for "The Banishment" because his age wasn't ideal, however Konstantin was allowed to read the script after which he campaigned for the role.  Again he was selected for the lead role.  This led to him winning the Palme award at the Cannes Film Festival, the first time a Russian had won.  He has been working steadily in movies and tv.

Maria Bonnevie  who played the female lead, Vera was born in Sweden.  She has appeared in films with Icelandic, Swedish, Norwegian, Danish and English films including "Insomnia" (1997).  She speaks Russian and was one of the first roles decided.

Alexandr Balluev who played the brother Mark, in his youth hoped to be a hockey player.  He sent 7 years with the Soviet Army Theatre.  He had appeared in a few American films and was a big star in Russia.  He also speaks German, English and French.

Dmitry Ulyanov played the 3rd brother Robert, who gave some emotional support to Vera.  His film career started in 2000.

I originally viewed this a little too casually and felt I was missing something even after the special features.  A second more careful viewing gave me some more insight, although not certain I really got it.  Multiple viewings can often give more understanding and enjoyment.  http://www.therealjohndavidson.com/2020/08/multiple-viewings-can-enhance-your.html

I have now seen all 5 of Andrey Zvyagintsev feature films and they have all been impressive.  I look forward to his next film.
Posted by John F Davidson at 5:58 PM