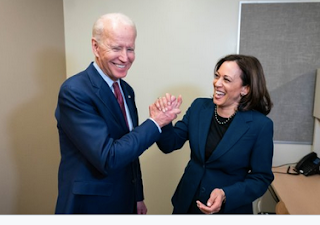 A confession to start.  I thought Kamala Harris should have been the presidential nominee so being picked as the Vice President candidate almost seems like a consolation prize.  On the other hand Joe Biden proved himself to be above personal vindictiveness, a quality that should be appreciated more than usual in contrast to the current president.

What to like about Kamala Harris?  Barely heard of her before the judicial hearings, but I loved the way she systematically handled William Barr and Brett Kavanagh.  She certainly earned Trump's dismissive characterization of "nasty."  But she has a lot more going for her when you dig deeper.  As a prosecutor she tackled large corporations.  She officiated at an historical gay marriage.  She was tough on crime. There will be criticisms from some quarters that she wasn't tough enough or too tough, but it should be pointed out she was pragmatic and pushed as far as she thought prudent.

Somewhere along the way, Biden realized that there were a few women who were qualified to be president and their time was overdue.  He also realized that black lives really do matter and he needed to cater to that, although he seriously considered a few women including Amy Klobuchar before she recognized the party would benefit from a black leader.  Joe is known to like Elizabeth Warren who had done him a big favor in one debate and lately Governor Gretchen Witmer.  So the process narrowed the decision, but Kamala Harris still stood out.

Kamala's confrontation with Biden at a primary debate was said to be a mark against her.  Personally she seemed the better prepared and bold candidate.  However she apparently offended a number of established Democrats and her support dried up.  She was realistic and decided to drop out in the interest of both herself and the party.  Biden is said to value loyalty and to want someone he can work with and recalled how Kamala had worked with his son Beau on some efforts he supported.

Contrast that with Trump who seemed to pick foxes to guard the henhouse.  One of his early strategic supporters was Jeff Sessions.  Sessions is not someone I admire, but he had enough sense to know, ethically (and politically) he had to recuse himself from the Russian query.  Trump thinking of only protecting himself found a way to fire Sessions and has continued to do everything he could to humiliate the man who played an important role in his rise to power.

Trump knows how to manipulate prejudice to serve his goals, but continuously demonstrates he has little empathy for his rabid supporters.  Instead of pushing a healthy agenda as best he could, he prefers to continuously stoke prejudice against blacks, Mexicans, Iranians, Chinese, etc.  Trump
while insecure has an enormous ego that drives him to take advantage of ignorance for his own selfish benefit.

Abraham Lincoln is revered for his wisdom.  Choosing his cabinet he selected some of his rivals, partly to keep them under control, but also he recognized they were capable.  Barrack Obama in choosing his Vice President, did not have a close relationship, but recognized that Biden would balance the voters' perceptions of himself.  They came to mutual respect and it was actually Biden who successfully pushed for same sex marriage.  Check out a review of Doris Kearns Goodwin's book, http://www.therealjohndavidson.com/2011/11/team-of-rivals-has-lessons-for-today.html

Mike Pence was a clever choice for Trump, although he didn't particularly think so.  Paul Manafort realized Trump was not going to be easily accepted by evangelicals although his policies favored their needs.  Pence gave Trump credibility with evangelicals and other religious conservatives. With his own presidential aspirations thwarted Pence has decided his best path to influence and future office is to suck up to Trump, no matter how ridiculous (and even detrimental to Americans).

Trump has made it easy for the Democrats to position themselves as the party of rational thinkers.  Inevitably they have to cater to special interests, financial and others, but they are doing so by trying to please a wide variety of Americans.  Whereas the Republican primary contenders back in 2015-2016 often seemed to try to one up on their toughness, the Democrats tried to prove they were the more rational candidate.   Dropping climate change agreements, and the Iranian agreement were indications that long term thinking was for sissies.  Their handling of the Covid-19 pandemic shows a willingness to kowtow to an ignorant man.  In all fairness many Republicans know better, but keep quiet in their own quest for power.

Andrew Yang, Pete Buttigieg and Elizabeth Warren all brought good ideas to the party.  Bernie Sanders was perhaps the most rational of all, but was too scary for some.  I hope if and when the Democrats get to power they treat those brave enough to declare their candidacy to help push an agenda that really serves the people.  Trump supporters seem oblivious to rational thinking even when it is in their best interest, so unless the Democrats have an overwhelming victory they will encounter stubborn resistance while the entrenched wealthy manipulate the ignorant.
Posted by John F Davidson at 5:09 AM