You Like Murder Mysteries? Check out "Raat Akeli Hai" 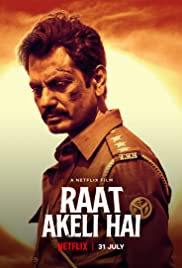 All murder mysteries have surprises, complications and a smart detective (or maybe lucky).  What distinguishes the excellent ones from the good ones is not just the plot, but such things as characterization, acting, dialogue, cinematography, and even lighting.  Netflix has made this movie available.

"Raat Akeli Hai" (2020) offers a lot of what you might expect, but goes beyond.  Political machinations are fascinating, and in this movie it is not just that powerful politicians cast their influence, but all the characters are secretive and manipulative.  An arrogant cop is the focus of their anger.

The family head, a powerful political figure marries a woman everyone declares a whore.  Then late the same evening he is brutally murdered.  It is obvious to most that the whore bride is guilty and others including the cop feel a lover is involved.

The phrase "the world is a cruel place" is first used  in a flashback five years previous when by a coincidence the cop had met the whore on a train ride and said it to her.  After he questions her after the murder she repeats the same phrase back to him to acknowledge she remembered.  It is used one last time, but you will have to see the movie to appreciate the context.

Details and aim, matter and that stems from producers who transform the story idea into a viable film.
Abischek Chaubey has experience as both a writer and directer with some productions such as "Udta Punjab" ( 2016) and "Ishiqiya" (2010).  Recently he wrote and directed "Sonchiriya" (2019), winner of the Filmfare best film for 2020 about a rebellion of Dacoits (Untouchables).

Smita Singh provided the story and did the dialogue as well as the script.  She had worked as writer, and assistant director for some television programs.  Smita wrote three episodes of "Sacred Games" 2018).

The background score was done by Karan Kulkarni and was effective at quietly stirring anxiety.  He had written music for such films as "Shahid" (2012), "Alligarh" (2015) and "Shubh Mangal Zyada Saavdhan." A few unobtrusive songs that helped set a mood were written by Sneha Khanwalkar  She has also composed music for such films as "Gangs of Wassepur" (2012), "Detective Byomkesh Bakshy!" (2015) and "Manto" (2018).  There were no Bollywood dance routines that turn off some Western sensibilities.

A. Sreekar Prasad provided his award winning editing talents.  Some reviewers have criticized the length of "Raat Akeli Hai," but the difficulties of a complex plot are handled well and hold attention.  He has worked with such films as "Dil Chahta Hai" (2001),  "A Peck on the Cheek," (2002), "Mangal Pandey:  The Rising" (2005), "Gandhi, My Father" (2007), "Talvar" (2015) and over 200 films, including many Tamil films  Check out: http://www.therealjohndavidson.com/2011/07/dil-chatha-hai-bollywood-classic.html

The stellar cast was led by Nawazuddin Siddiqui.  The son of a farmer he became a chemist.  A long time playing minor roles before being recognized as an exceptional actor.  He played an aggressive
obnoxious policeman in "Kahanni" (2012) blowing smoke in the face of a pregnant woman.  He played an obsequious role in "The Lunchbox" (2013).  Perhaps better known for gangster films like "Gangs of Wasseypur" (2012) and the tv series "Sacred Games" (2018-19).  Other interesting roles include "Manto" (2018) and "Photograph" (2019).  In "Raat Akeli Hai" he is a tough detective in a delicate political situation (many of the other characters campaign for his firing)  and with his mother who is concerned he is too fussy to get married.  Read more: http://www.therealjohndavidson.com/2015/09/nawazuddin-siddiqui.html

Radhika Apte plays the whore bride resented and /or suspected by everyone.  An economics and Mathematics graduate Radhika eased into films with different languages including Bengali, Hindi, Telegu, Tamil, Marathi and Malayalam.  She won awards and critical acclaim including a film with Nawazuddin, "Manjhi:  The Mountain Man" (2015).  She also shared space in "Sacred Games" (2018-19).  Other noted films include ""Pad Man (2018) and "Lust Stories" (2018).

One of the tough police officers undermining the hero was played by Tigmanshu Dhulia who has won awards in negative roles.  Beyond acting Tigmanshu has won awards as a writer, director and producer.  Some of his films include "Paan Singh Tomar" (2012), "Shahid" (2012) and "Gangs of Wasseypur" (2012).

Supporting roles are all realistically done.  If you like murder mysteries this is one that stands well for comparisons.

Note:  Bolded movie titles are of ones I have seen although not necessarily recommend, but indicates some development of the artist.  Did not repeat the bolding when subsequent crew worked on the same film.
Posted by John F Davidson at 8:16 AM