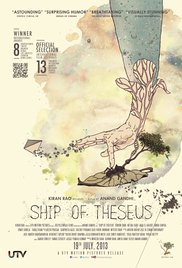 Circumstances guide our lives.  We think we are in control, but decisions are made all around that we don't control.  I needed to return a library item, but my usual drop off location was inconvenient (due to a flu scare) and I decided to drop it off at a smaller library.  Another decision was to check out their facility.  They had a section of foreign DVD's with a limited selection.  Noted one that I had never heard of, put back and as the selection was almost all ones I had already seen or had heard negative reviews about I picked it up again.  Noticed the name Kiran Rao that I recognized as the wife of Aamir Khan, a much admired Bollywood personality.  Later learned she had had nothing to do with the production of the movie, only that she liked it and decided to promote it.  Looking for a time filler thought it would be the best of a lack lustre choice.

You might not like it, but I thought "Ship of Theseus" was a master piece.  Definitely qualifies as an "art" film with heavy emphasis on philosophy, but also very aesthetic.  The director/writer/co-producer Anand Gandhi dropped out of school, but obtained a diploma in philosophy.  To earn his keep he at first wrote television scripts for low rated, but popular Indian tv shows.  He worked on two shorts before taking on this feature film released in 2012 after a three year effort.

A philosophical frame begins the film:  if a ship is replaced part by part is it still the same ship?  And if the old parts are used to build another ship is that new?

The plot is a bit confusing and leaves many viewers mystified at the end.  We are greeted by a blind photographer.  She seems very confident and working with her boyfriend takes photos that are displayed in galleries.  She is given a corneal transplant and ironically seems bewildered and lacking in her former confidence.

The second segment involves a monk with strong views on animal rights.  He is diagnosed with cirrhosis of the liver and confronted with some difficult choices. He is an activist against animal testing and we see him with lawyers presenting a case in court.  Philosophy is argued with a lawyer as the two ponder life.  The monk rejects medication for his condition as he discovers the providing companies did animal testing.  Eventually he gets a liver transplant as he feels he needs to live to carry on the cause..

The third segment involves a conspiracy to steal organs from patients requiring surgery and to sell them to others.  The protagonist is a stock broker who received a kidney transplant and revisits the hospital where his activist mother is recovering from a fall.  This is where he learns about the kidney thefts.  Many of the recipients are unaware of the theft, but thinking that some poor or dead person donated the organs.  One of the stolen kidneys is traced to Sweden where they confront the recipient who feels guilt and tries to deal with it.

At the end of the film the three main characters who have all received a transplant are brought together with other transplant recipients for a screening.  At the end all we see is a cave with shadows.  This was a referral to Plato's Cave Allegory that human perception is like seeing shadows on a wall and not reality.

This film was successful winning awards at a number of festivals, but I suspect was not a blockbuster at the box office.  Kiran Rao saw it at a festival and decided to promote it and was asked to present it.  She had been a lifelong vegetarian who converted with her husband Aamir Khan to vegan.  If you have seen the trailer for "Dangal" you might overcome some of your prejudice against veganism.

The extra disc with special features is a gold mine.  Perhaps other movies have as interesting a background or I have overlooked much.  All movies demand collaboration and the features bring many elements to our attention.  Two shorts each with philosophical questions.  A 28 minute short from 2003, "Right Here, Right Now," follows two chains of events from one person leaving home.  One chain is of frustration (the boy rejected his mother's efforts) and the other chain of john(the same boy accepted his brother's painting).  None of the actors were paid at the time, but were compensated after it won some international awards.

The second short from 2006, "Continuum" is 38 minutes and consists of short themes of different continuums.  Pankaj Kumar was one of three cinematographers.  This short also won an international award.

The cinematography is outstanding, even stunning in parts.  The cinematographer, Pankaj Kumar had done a few shorts, but this was his first feature film- and he received awards and nominations from several film festivals.  He suggested the photographer be blind and the writer accepted.  He went on to handle the cinematography for "Haider" and "Talvar" both of which have been discussed in earlier blogs.  Next product will be "Rangoon."  See http://www.therealjohndavidson.com/2015/02/haider-bollywoods-version-of-shakespeare.html

Anand had admired sound designer, Gabor Erdelyi who had mostly worked with the Hungarian film industry.  The sound for "Ship of Theseus" has been described as lush.  One film he had worked with was "The Turin Horse,"  a very harsh movie with constant howling winds.

Originally Anand had brought Aida Aydah Elkashef from Egypt to help advise on casting decisions, but was impressed how she read off auditioning scripts and persuaded her to accept the role of the blind photographer.  That sounds like an oxymoron, but they sought guidance having one person consult with the everyday concerns of blind people, but also found an actual blind photographer. Aida played herself in a 2013 Oscar nominated documentary, "The Square" about the events at Tahrir Square.  See http://www.therealjohndavidson.com/2021/06/the-square-illustates-fragility-of.html

Sohum Shah originally won a place in the cast, (as the stockbroker) but was discouraged by the waiting period and asked to come on board as a producer to assure himself the project would move forward.  The script seemed like something he wanted to be associated with.

Neeraj Kabi had impressed Anand in a stage play and was recruited to play a monk.  In some ways this role took on most of the philosophical burden of the film.  He lost almost 17 kilograms over a period of 4 months to show a man with cirrhosis of the liver who eventually gets a transplant.  He also had a role in "Talvar" an interesting film blogged about earlier plus "Detective Byomkesh Bakshy"

Hugo Weaving, a prominent Australian actor is listed as producer.  Unable to learn anything of his involvement, but that he had been listed as a co-producer a decade ago.

In short I do recommend this film.  It does use subtitles, but a lot of the dialogue is in English.

Anand demonstrated an ability to write a provocative script and collaborate with large number of actors and technical staff to produce a master piece.  Hopefully he will get more opportunities.
Posted by John F Davidson at 2:39 PM