THE EMIGRANTS IN A NEW LAND: SWEDISH MOVIE PERSPECTIVE 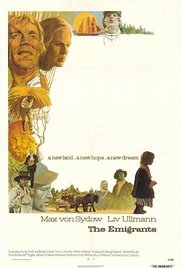 We third or fourth generation North Americans forget how we got here.  Unless you are indigenous your ancestors traveled a distance to get here.  In fact indigenous people did their migration a few years earlier.

Jan Troell, a Swedish film maker took a view from his side of the Atlantic and took us back to the 1840's to explain the pressures that directed a group of poor Swedes to cross the ocean.  This is not a story of triumph, so much as a story of overcoming countless obstacles.

The movie is very realistic.  There is a lot of mud and dirt.  Bodies are covered with dirt, blood, sores and unshaven hair.  You see animals die as well as be gutted.  Not for the squeamish, but would help to appreciate earlier conditions, still common enough for multitudes of people today.

The movie starts in rural Sweden where the farmers had great difficulty in eking out a living.  Moving rocks was an ongoing battle and apparently the soil was not especially fertile.  The main protagonist Karl Osker (played by Max von Sydow) had trouble paying his debts.  His wife, Kristina played by Liv Ullman was reluctant to move, but when her uncle, a banished priest wanted to move a group coalesced amounting to about twenty.  They sold almost everything they owned and many took on debt.

The trip over is usually skimmed over in other movies, but was a unique challenge in itself.  The passengers were crammed in dark, smelly quarters with little privacy.  The ship was on a rocker so that the viewer could get a feel for the swaying in the ocean.  Some of the travellers died and were buried at sea.  The heroine had a lot of blood from her nose and if you didn't know she was in the sequel you would have feared for her life.

Still their journey across the ocean was only part of their journey.  They took rail and boat and walked.  For some viewers the trip would be numbingly boring, but the point was to understand a bit of the suffering.  Friendships were tested and formed.  Kristina was upset with a passenger, Ulrika she called a "whore," eventually became close friends.  Karl Oskhar's brother Robert played by Eddie Axberg persuaded a friend to come over.

The first movie, "The Emigrants" takes over two hours to end at their destination in Minnesota which although not quite what they had visualized did show signs of fertile soil.

The second movie, "The New Land" shows how they turned bush into profitable farmland, but not until after a lot of physical labour and financial stress.  Language was slow to develop for the adults.  There was also some religious conflict when some immigrants felt Kristina and Karl Oskar were not respecting traditions.  Robert the brother was tired of the work and left with his friend Arvidd towards the goldfields of California.  They never made it, but for a brief time had a small fortune due to a boss dying from yellow fever and then later were conned out of the money.  The friend died and the brother returned.  He died from disease contracted during his travels after some family conflict.

A basic fact of emigration to North America was that the land was already occupied.  There was an uneasy relationship with the natives, but over time they were mistreated by the government and rebelled.  There were a few brutal killings showed, but the most upsetting scene was when a group of over 15 natives were hung simultaneously.  Minnesota was the site of a huge Sioux rebellion   Earlier an actor pointed out that the land had been stolen from them while Karl Oskar claimed to have acted in good faith, but understood the unfairness.  The Europeans brought new technology, and a stronger organization (Indians belonged to a number of tribes) and certain self righteous aggression.

Kristina felt homesick and missed her Swedish culture.  Karl Oskar was pleased what he had been able to accomplish.  As the Civil War was about to begin he felt obligated to join the army, but his wife was against killing.  He went ahead to enlist, but was rejected for medical reasons.   In the end the children speak only English. 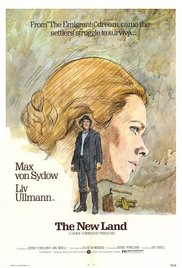 Kristina seemed to be having babies all the time.  Karl Oskar was a considerate man, but felt making love was an integral part of his marriage.  Near the end she was told by the doctor she could not have  more babies or she would die--they took to separate beds as the only available contraception and he accepted his fate, but she felt she was not being a wife resulting in another pregnancy that proved fatal.

Max von Sydow had a long history making films appearing in many languages.  Liv Ullman was actually a Norwegian and there was some resistance to her casting, but she won without an audition.  These two movies helped her develop an American as well as Swedish career.  The third main character, Eddie Axberg had a long acting career, but surprisingly combined it with a long career as a sound mixer.

Another noteworthy actress who played Ulrika the loose woman who befriended Kristina was Monica Zetterlund who was a very popular jazz singer in Sweden for several decades.  In "The New Land" her real life daughter played her film daughter.

The book was by Vilhelm Moberg and was very lengthy.  There was some thought to making it into one movie, but it ended up as two long movies.  It was given the largest budget of any Swedish movie, despite the fact that good portions were filmed outside Sweden.

Jan Troell, the director and one of the screen writers was quite different from his more famous contemporary Ingmar Bergman who used a lot of symbolism in his films.  Troell used simplicity in his movies.  In these two movies he was the main cinematographer and also the editor.  He had many discussions with Vilhem Moberg who was mostly co-operative, but they did have disagreements.

The other screen writer, was the producer Bengt Forslund.  He is better known as a producer, but had written a number of movies and collaborated with Jan Troell.

Looking over Jan Troell's history I see that in 2008 he directed, wrote, edited and was cinematographer for another superior movie I had seen, "Everlasting Moments"  Also noticed that Eddie Axberg had a small role and was involved with the sound production.

This movie is a very impressive production, but not for those easily bored or squeamish.  It gives a good idea of what motivates emigrants and how their perseverance is admirable.

To get an overall view of Swedish movies check out:  http://www.therealjohndavidson.com/2015/06/swedish-movies.html
Posted by John F Davidson at 1:19 PM