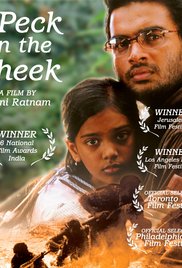 Over a decade ago I stumbled on Bollywood and it seemed like a good match.  Loved much of the music and found the stories and actors interesting.  It was my dependence on subtitles that fooled me into thinking many regional language films were Bollywood (which speaks Hindi), when they weren't, although there certainly were links.  India is the world's top producing film country, but the numbers are greatly boosted from a rich regional industry.


When I first was investigating Bollywood I watched a Tamil movie with the music from what I thought was a Bollywood composer, A R Rahman.  "A Peck on the Cheek" was involved in the civil war in Sri Lanka, but the main characters were from India.  This was my first acquaintance with Mani Ratnam, Madhavan and Nandita Das who were all also Bollywood standards.  An award winner which I enjoyed and perhaps it even perked my interest in Bollywood.  Because of the setting I did realize it wasn't the usual Bollywood.  The concept of suicide bomber originated amongst Tamils in Sri Lanka and one is depicted in this about a young girl with the help of her adoptive parents (from India) searching for her birth parents in Sri Lanka.

Over a few years I saw a string of Tamil movies that I didn't realize were not Bollywood.  The unifying elements were Mani Ratnam, A R Rahman and Arvind Swamy who was the leading man.  "Roja" (1992) was the first and involved the Kashmir conflict; then "Bombay" (1995), although ended in Bombay started in Tamil area, "Sapnay" (1997) that had Kajol as leading lady and finally" Kadal" (2013) where Arvind played a priest trying to save an adolescent against an ex priest.  This last one had my number one iTunes song, "Nenjukkule" as sung by Shakthisree Gopalan.  Kajol is making another Tamil movie this time with Dhanush.

I had always associated A R Rahman as a Bollywood artist, but he was known as "the Maestro of Madras" -the former name of Chennai in Tamil Nadu state. He started with Tamil movies, and moved to Bollywood with some of my favourites, but has expanded to the UK and USA while not giving up southern Indian dialects.  He not only writes very popular music, but also sings and produces for other composers.

Shriya Sarin is one of my favourites anywhere.  She has not only appeared in English speaking roles, but also Canadian directed films, "Cooking with Stella" (2009) and "Midnight's Children"(2012).  I first saw her in "At the Other End of The Line" (2008) where she played a girl next door type, except she flew from India to California to stalk (with no bad intentions) a phone voice.  Intrigued I searched and found her in a Tamil film, "Kanthaswamy" (2009) where her role was sexy, but also bitchy.  More recently she appeared in one of my favourites, "Drishyam" (2015) in a key supporting role (see http://www.therealjohndavidson.com/2015/11/driishyam-bollywood-remake-masterpiece.html "Drishyam" was originally Malayalam.  Recently Shriya finished a Telegu film to good reviews (not seen).  She got her first break in Telegu and has also acted in English, Kannada, Malayalam and Hindi--an example of multi-lingual actor

Rajinikanth established his reputation over a 100 movie career.  One I saw was "Sivaji" (2007) with Shriya as leading lady.  He was asked to get involved in a major endeavour involving photo realistic motion capture film (like what was seen in "Avatar").  His daughter Soundarya, a director  was heavily involved as was A R Rahman who eventually wrote the music.  It ended up in 2014 as "Kochadailyaan" with a cast that included Rajinikanth, Deepika Padukone and Jackie Shroff.  Presented in 6 languages:  Tamil, Hindi, Telegu, Bengali, Marathi and Punjabi.  Criticized on technical grounds, but praised for everything else.  It was a big step forward for Indian cinema in its technological progress.  I saw a demonstration of some of the motion capture before and after the story with the special features.

A younger star in Tamil films is Dhanush.  First saw him in"Aadukalam" (2001) an award winner with an odd topic. The hero was heavily involved in cock fighting.  I saw a feature that demonstrated what looked like vicious cock fighting was really CGI.   Later saw Dhanush in his first Bollywood film, "Raanjhanaa" (2013) opposite Sonam Kapoor.

"Interrogation" (2015) was India's nomination for an Oscar. About immigrants from another region being rounded up to confess to a crime to satisfy a corrupt police force that needed a confession.  Very well done and believable movie.  Watched on Netflix after a tip from a website, Access Bollywood.  Noticed Dhanush listed as producer.

"Sairat" (2016) first brought to my attention by a comment from Aamir Khan who highly recommended it.  Another new language for me--Marathi.  The music both for the background and for song and dance was very pleasant, Excellent, sometimes stunning cinematography.  Mood changes in second half  to grimly realistic with the two main actors showing a wide range of emotions.  The high caste girl can't cook and is sensitive to smells which causes conflict.  If you do not understand the caste system the ending will be a shock, but not so much if you do understand it; it was a shock for me.  The writer and director, Nagraj Manjule is very realistic and took a bit part.  The best of all films I have seen so far in January 2017.

Priyanka Chopra, famous in Bollywood and with "Quantico"  formed a production company with her mother Madhu and they came out with a Punjabi movie (not seen).   I didn't see their Marathi "Ventilator" (2016), but bought a song recorded by Priyanka called "Baba."

Disney ventured into India and helped produce a Telegu movie, "Once Upon a Warrior," (2011) starring Shruti Haasan and was about a blind swordsman helping to restore justice to an ancient kingdom.

"Baahubali:  The Beginning" (2015) was a big Telegu block buster that took almost four years to complete.  We in the west don't usually realize it was not only Europe that had ancient history and this epic demonstrates civilization started in different places.   Lush scenery and large scale battles.  I had to wait until it was dubbed in Hindi with English subtitles.

"Eeaga" (2012) has to be one of the strangest movies to describe.  Before you dismiss it consider that it has an IMDB rating of 7.9 after over 13,000 voters.  It starts off like many movies as a love triangle, but soon one male kills another.  The dead male, is reincarnated as a housefly.  Improbable as it sounds he establishes contact with his lady love and seeks revenge.  Special effects are noteworthy.  Music by M.M. Keeravani who wrote music for a lot of Telegu films, but also some Bollywood ones.

When discussing Bengali some of the early classics were done by Satyajit Ray who is definitely non Bollywood.  He is recognized as one of the most artful director/writers on the world scene.  No song and dance routines for him, but look for character development, dialogue and camera angles.  I have watched "Aparajito"(1956), Pather Panchalli (1955) and "Charuklata" (1964), all black and white masterpieces.

As a Canadian it is amazing to me that languages I had not heard of until recently have more speakers than our population.  Telegu has 74 million, Tamil 72 million, Marathi 68 million and Urdu over 70 million.  This diversity is not only reflected in India itself, but also in the diaspora that has spread all over the world.  The movies help connect them.

There is a great overlapping of ideas and personnel between the regions and Bollywood.  Just like food from different parts of India.
Posted by John F Davidson at 1:13 PM