"The Square" illustates the fragility of democracy 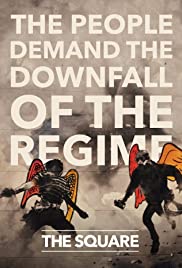 Watching "The Square" was very scary.  The Egyptian revolutionary protesters were in reality a small group.  But there was an anger in the population that was ignited and huge crowds assembled in Tahrir Square.  In succession they were able to force out Mubarak and later Morsi, but in the end they got a military ruler.  Controlling military force has always been a key to power and media control has been a factor.  Political psychology was used  to help manipulate.

We don't realize how lucky we are and how fragile democracy really is.  The so-called "Arab Spring" started in Tunisia and quickly spread to Libya, Syria and Egypt amongst others, but in the end as of today Tunisia is the only one that escaped dictatorship and that precariously.  Military/police power is used to keep dissent in check while media control distorts reality.  In religious societies the people are encouraged to obey their leaders.  Western powers wanted cheap energy and Arab nations had plenty.  All we had to do was make friends with the leaders and keep them happy.  In turn they used their increased wealth to tamp down any resistance.  Egypt was not blessed with huge reserves of oil, but as the predominant Arab nation and in control of the Suez Canal they were in a sense the force needed by dictators.

Our democracies were won by a combination of luck and persistence.  The Magna Carta occurred because a despotic monarch needed money and to get it he had to make concessions to aristocrats which opened the door.  Americans, upset that they were taxed, but had no political representation violently rebelled.  They were helped by sympathetic French, but perhaps more by an ocean.  The British Empire realized Canada, Australia and New Zealand were expensive undertakings and contained British political sensibilities.

The film depicts the rioting and the military intervention.  We hear lots of conversations of revolutionaries along with explanations that motivate them.  We see torture and battle wounds inflicted on those who dared to dispute the dictrtorship.  They anticipate if they are successful in getting rid of Mubarak they could easily end up with someone just as bad.

As it happens they are successful in forcing Hosni Mubarak out.  The military steps in to force elections, but in a very short time.  As was pointed out it takes time to organize political parties and the Muslim Brotherhood who played a cagey game to this point) were organized.  Most people did not want them to rule as they were too strict in religious concerns.  With little real choice the people picked Mohammed Morsi, the Muslim Brotherhood candidate.  In fairness many Egyptians were not politically aware and just wanted the fuss to go away.  Somewhere around 10% of the population was Coptic Christian and the rulers had tried to separate them with some success.  There was some solidarity, but not enough.

Again the revolutionaries rebelled in Tahrir Square expressing their disdain for Morsi and eventually he was forced out by the military. They said they would maintain the society until proper elections could be organized.  Power was too much as General Abdel-Fattah El-Sisi decided to take command and was able to win an election in a landslide as many voters more concerned about instability.  Not enough people were willing to fight again.

The video has come with great risk.  Some scenes show police actively looking for film.  Some of the mutilation of victims is hard to stomach.

A key person in putting this together is Jehane Noujaim.  Born in Cairo and educated at Harvard.  She was director, cinematographer and producer.  She has a history of doingfactual  documentaries that present a Middle Eastern viewpoint.   Her efforts are often criticized by politicians, including Americans because they hit a nerve.  One film look forward to is "Control Room" (2004) regarding the Iraq War.   She is working in the States using her directing and producing skills.  Together with her husband Karim Amer she received an Oscar nomination for this film.

Aydah El-Kashef was one of the revolutionaries depicted expressing concerns about the revolution being hijacked.  She had played a big role in a movie from India based on a Greek philosophical idea about the time of rising tensions in Egypt "Ship of Theseus" (2012).   She had been invited to India to help with casting, but got offered a most unusual role.  Read more:  http://www.therealjohndavidson.com/2017/01/ship-of-thesus.html

After watching the movie I recalled reading that Mohamed ElBaradei who was a well respected international diplomat had offered his services.  He had been involved in the nuclear inspections of Iraq prior to invasion and has gone on to promote nuclear radiotherapy for cancer.  He is not mentioned in the film or at least I didn't catch mention of his name.   My understanding is that he did get involved with opposition efforts, but resigned when some members started violent action against Morsi supporters.  It is hard to be sure of the facts, but it is believable that there were differences within the opposition, which can be fatal for strong unified action.

In Chile there were something like 17 different groups that were opposed to the dictator Pinochet who controlled the military and most of the media.  When the opportunity to conduct a referendum Pinochet was confident that the opposition was too disorganized to vote him out.  The group was united enough to want to make a half hour promotion that they were allowed each week. rotating among the many groups. An advertising agency was able to force a unified message so that bickering would not dilute the effort.   Unity made a big difference.  This was depicted in "No" (2012)

Some would argue that North America had a slippery hold on democracy.  In the last American election the side that lost felt they were in the right and declared fraud and some actually stormed the Congress to interfere with formal acceptance of the results.  They have not succeeded so far, but even so the rules in play give them a lot of power to stymie the side that did get elected.  Here in Canada we are a bit self righteous, but we still have a system that allows a minority to rule over the majority.

A quote from the film that I would like to close with which might also be appropriate elsewhere , "We're not looking for a leader, we are looking for a conscience."