Mad For Each Other another gem from Korea 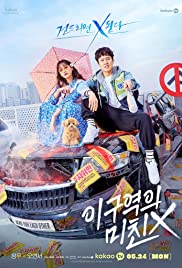 Korean mini series have captured my attention.  My curiosity was stoked when my son spent 18 months in Korea teaching English.  Many years ago the Korean authorities recognized a profitable export could be culture and they set out to find out what the market opportunities were.

One of the most visible results were the boy and girl bands.  Passing by Jackson Square before the pandemic the very long lineup for a boy band at the adjacent Copps Coliseum included young girls who had flown all the way from Vancouver for the only Canadian appearance.  Out of touch with young people more than I thought.

Korean movies became part of my regular viewing as DVD's were easily accessible at the local library and later got my fix through Netflix.  Sex and violence were often more extreme than American movies, but the stories were compelling and well presented.  One example familiar to many North Americans was "Parasite" (2019) that won two Oscars.  It was slick, but had an underlying message.  http://www.therealjohndavidson.com/2020/09/parasite-breaks-oscar-tradition.html

Then I discovered their mini series, at first not realizing it wasn't a movie.  "Crash Landing on You" (2019) was a good choice.  http://www.therealjohndavidson.com/2020/02/crash-landing-on-you-very-addicting.html

"Mad for Each Other" was slightly different in that they were about 1/2 hour each and the first episode seemed like a typical rom-com and funny.  As usual a viewer needed to realize we were being set up with the main characters and the main premise.  As one IMDB responder declared it went to "heart attack serious."  There was still lots of humor.  The two main characters were both psychological counseling patients at the same clinic and coincidentally they lived next door to each other in an apartment complex.  Contrived circumstances are standard tools of rom com.  We learn that the guy is a suspended police officer with anger management issues and in reality is an honest cop.  The girl has trust issues and we learn that she had been misled into an affair by a married man who later beat her.  The comedy veers off in a dramatic direction and you can imagine all the misunderstandings and obstacles that keep the couple apart until the very end.

Unlike with the movies, the sex is very little and suggestive and usually relatively mild violence.  They are awkward around one another even when it is obvious they like each other.  The police man had been in pursuit of a drug dealer who it seemed was protected by higher ups in the police department.  The old boyfriend comes back to pursue the leading lady and does stir things up.  A few side issues include gossipy women, a stray dog and a transvestite and a part time worker do fit into the plot.

Ending was different in that involved some pretty scary action scenes and acting out a psychological problem.  I don't think it would be a surprise that it has a happy ending.

Directed by Tae-gon Lee who has 8 credits, all for television series, three of them for the full series.          Written by Ah Kyung as the only script.

A romance can only work if we "like" the couple.  The leading male was played by Woo Jung who strikes one as an earnest soul with a touch of self deprecation.  He has won a few national awards.  The leading lady, Yeon-Seo Oh once had the leading role in a number one rated drama.  When she gets out from behind sunglasses and head gear she is attractive, but perhaps more important she is believable as a frightened, distrustful woman who has a heart.  The supporting players play their roles well.

Those people who developed popular cars and electronic gear have a comparable command of what it takes to entertain you.  You might not notice that your emotions are being manipulated, but of course that is how it works.