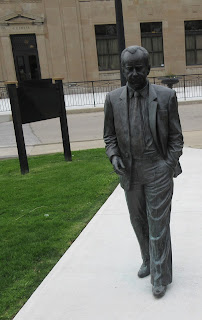 What makes a city unique?  The key thing is people.  My adopted home Hamilton is a mid sized city, close to a major large city, Toronto and at the same time surrounded by farmlands.

One summer, a few years ago there was a festival not far from my home and I learned that Hamilton is twinned with a small city in Sicily called Racamulto.   The Festival is based around a religious ceremony going back to 1503.  At that time a noble group was caught in a violent storm in northern Africa.  They came across a hidden statue of SS Maria del Monte and the storm subsided.  They decided to take the statue back to Sicily, but while on the journey the statue became bogged down in Racalmuto and it was decided to keep it there and declare SS Maria del Monte their patron sense.  The journey has been reenacted both in Sicily and in North America.  In 1931 Dr. Vincent Agro made it a 3 day event.

It is believed over 25,000 Hamiltonians have a family connection to Racamulto.  As of 2011 there were less than 9,000 citizens in Racamulo.  The Fratellanza Racalmutese Italian Club was formed in 1933 and located along Murray Street that has been renamed Corso Racalmuto.  It is the centre of the festival.  Also on Corso Racalmuto is the Bonanza Italian bakery famous city wide for its submarine sandwiches. 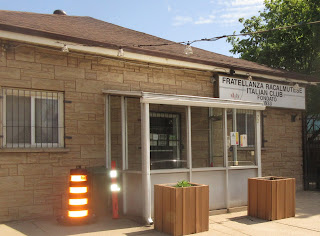 Covid pandemic delayed the 2021 Racalmutese Festival which re-enacts the journey and adds in music, food and a children's carnival.  Hopefully they will be able to restage it starting August 27th.

The statue at the top is of a famous Racamultese citizen, Leonardo Sciassa.  He was born and lived his life there.  One historic building carries his name.   The statue is a duplicate of one in Racamulto.  He was a teacher until 40, then a writer including books and movies.  One of his books was about the kidnapping of Aldo Moro.  Lots to say about Mussolini, the Mafia and Italian politics.

Sicily makes many people think of the Mafia and poor people.  That is unfortunate as Sicily has a very interesting history.  Carthaginians (you might think of Hannibal) had settlements.  Archimedes, was a famous Greek scientist who deterred invaders.  The Normans more famous in conquering England also controlled parts of Sicily.  The Romans obviously played a role.  Arabs left their mark including the Sciascia name and some foods (eggplant one of my favorites).  Today refugees from Africa head towards a nearby island Lampedusa  considered part of the province.   Many of of the refugees end up in Sicily.  I love the Sicilian canoli.  Years ago I found a white Italian wine Lacryma Christi (Tears of Christ ) which owed some of its taste to volcanic soil found near Mount Etna.

The Racalmutese have certainly left their mark on Hamilton.