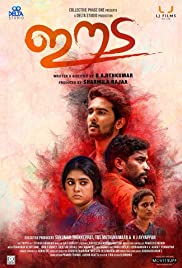 It may seem I am obsessed with Malayalam movies.  For awhile I thought they just had a few outstanding actors and crew members, but now it seems they are overloaded with talent and experience. Although those in front of the camera are the ones we most easily identify it is often the dozens of crew behind the scene who make us forget we are watching a contrived story.

Likened to Romeo and Juliet "Eeda" proved to be similar, but with a few wrinkles.  There was a family hatred with a history of assassinations.  The film depicts the role of party loyalty that calls for revenge.  Both parties decides such things as who marries who, who goes to jail, and who kills who.

Of course the two young lovers meet by chance.  There are a few misunderstandings, but soon they pledge to one another.  A crisis occurs and they are forced into desperate action.  It would not be fair to tell you what happens, but to assure it is not quite like Romeo and Juliet, but there is some ambiguity at the end.

What makes this movie so attractive?  The actors look real and were not picked for glamour.  The plot is believable, but with interesting unique details.  The cinematography is beautiful, especially in natural sections.  There is fighting where the hero overcomes odds, but not with any great strength or martial arts skills.

Shane Nigam who plays Anand  had earlier appeared in "AnnayumRassoolum" (2013) and later in "Kumbalangi Nights" (2019).

Pappu, cinematographer was a camera operator for "Liar's Dice" (2013).

From a name never heard of, I have come  to expect enjoyable viewings from Malayalam films.  Of course  you must have discovered that English language cover a wide range of quality.  Expand your range of film and go for the better ones.

As usual I have bolded titles at first mention of films I have seen.