Is Israel such a bad example for proportional representation? 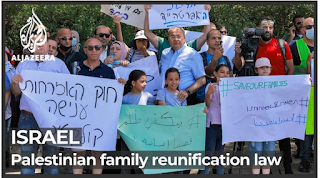 Those of us who advocate for proportional representation have been criticized that Israel was a bad case for the concept.  To me that is mixing up results with a tool.  Proportional representation is presented as a solution to a problem and although it has many benefits it cannot by itself solve all the perceived problems of the world.  It is an important tool that all reasonable voters should consider if they really want to solve many of the iniquities in society.

Israel's relationship with the Palestinian people is an abomination that is a problem with a global reach.  Unfortunately the Israeli voters with a proportional system have given support to restrictive laws and practices. The Israeli rulers have set up laws that are very restrictive to Palestinians, almost certainly out of fear mixed in with some ignorance.  How the rest of the world deals with this issue is much like how we deal with the Chinese persecution of Uighers.  The main difference is there is much sympathy for Jews, but not much for the Chinese autocrats.  Although we abhor perceived unfairness most nations respect the sovereignty of other nations for practical reasons.

Each Israeli election draws a fair amount of attention and for many it is the closest they are aware of proportional representation.  We understand there are political rivals who try to establish political alliances in order to get enough power to make decisions.  Netanyahu has been very prominent for over a decade and those who follow the news are aware that by allying himself with some Orthodox elements he has been able to gain power.  For the last several years the alliances have been very fragile.   Giving power to what are considered extremist minorities is one of the charges against proportional representation.

Two developments (I am sure there are many others) have been significant.  Netanyahu has been tainted with corruption charges and many voters have become leery of supporting him.  The other development is among the Arabs who have their own factions.  Some are reluctant to co-operate  with Jewish parties that are openly anti-Palestinian.  Others have looked for opportunities to gain some leverage.  With this last election balancing efforts have opened up one such opportunity.  As has been pointed out the head of the new alliance is actually more extreme than Netanyahu, but there have been slight changes with four Arab electors essential to maintaining the current balance.  If they choose to not support any new legislation the government will fall and a new election will ensue.  They of course need to be careful to maintain the current alliance if and until something better presents itself.

One example brought to my attention by Juan Cole in his Informed Comment occurred recently:  https://www.juancole.com/2021/07/parliament-unification-palestinian.html?utm_source=dlvr.it&utm_medium=facebook   Essentially the Israeli Parliament failed to renew a restrictive law against Palestinians.  Many of those who automatically would have renewed this law abstained realizing otherwise they would face another election.

There may not be too many more examples of the power of the few as it is a delicate balance that allows any leverage and there are many pressures that could disrupt it.  As in any democracy there are always many factions with their own priorities, but under proportional representation they have to consider the priorities of other parties.  Hopefully enough voters will see the results have been positive and the politicians will realize their best interest lies in respecting all the voters.

Under First Past the Post system the hard line parties would not have to pay attention to 20% of the population that Arabs represent in Israel.  We may be fortunate that corruption concerns forced voters and politicians to re-evaluate their priorities.

The bottom line is that proportional representation is a tool that can help solve a lot of problems, but other tools are necessary to solve such problems as climate change, nuclear war risks, refugees, hatred, violence, crime, etc.  Some of those other tools might be balanced education and media support.  It is reasonable that when more people are paid attention through proportional representation that society can move towards solving global problems before it is too late.

Both voters and politicians need to work together instead of maneuvering to gain disproportionate power.  More will get done, but it does require a joint effort which is something lacking today.  Proportional representation is a step in the right direction.