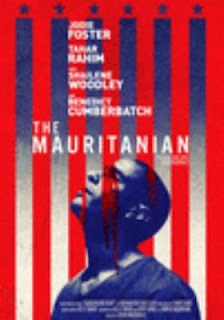 "The Mauritanian" (2021) is an important film with a message that is well presented.  During the Covid lockdowns, the local library keep access to books and DVDs, etc.  DVD special features help one apprciate some of the finer points  of a movie.

Guantanamo was created  to avoid legal restrictions by a government determined to impress their intention to defeat terrorism.  They needed information, but after awhile whatever information might have been usable was diminished in value.  They felt only by bypassing long established domestic and international practices could they deal with terrorism.

One of the tactics was to smear any legal defenders as terrorist lovers.  Nancy Hollander pointed out that although she had defended rapists and murderers she had never been tainted as a rapist or murderer.  Her point was that everyone deserved legal counsel and that the rule of law needed to be adhered to.

The two lawyers heard Mohamedu say he did nothing criminal, but later they were confronted with some confessions.  Still later they realized he had been tortured.  That meant that any such confessions could not be used, but still the American authorities felt he had to be detained.  An earlier post on torture explains my attitude towards the issue.  http://www.therealjohndavidson.com/2014/12/torture.html

Tahar Rahim struck me as over acting as he seemed jovial, very articulate, not at all how foreign terrorists are perceived to be.  However during the credits and also with special features the real Mohamedou Ould Slagh turned out to be very jovial, articulate and informed.

In the end, despite winning some legal concessions Slahi spent 15 years in prison and was never charged.  He expressed forgiveness for his tormentors, moved back to Mauritania and got married.  He actually sang along with a Bob Dylan song.

Kevin Macdonald, born Scottish mostly directed, produced and wrote for documentaries.  In 1999 he won best documentary feature Oscar for "One Day in September."   He also directed fictional features including "The Last King of Scotland" (2006) guiding Forest Whitaker to best actor Oscar and "State of Play" (2009).  Recently he completed a film on the Covid Pandemic, "2020: The Story of Us" (2021).

Michael Bronner, a producer and writer had been award winning broadcast journalist.  He had been a staff producer at CBS News and 60 Minutes while writing features articles for Vanity Fair and Foreign Policy.  He was involved in producing, "United 93" (2006) and "Green Zone" (2010) and "Captain Philips" (2013)

Music provided by Tom Hodge, cinematography under Alwin H. Kuchler and was edited by Justine Clark.

Tahar Rahim  played Mohamedou, the central character who maintained his sanity through torture.  Tahar was born in France of Algerian parents and is fluent in French, Arabic and English.  He burst to international fame with "A Prophet" (2009) for which he earned numerous awards.   In 2013 he starred in "The Past" under director Asghar Farhadi.  Also appeared in "Samba" (2014),

Jodie Foster played Nancy Hollander, the lawyer who defended Mohmedou.  She has been in films since age 3.  She was in commercials and many television series.  Playing a 12 year old prostitute in "Taxi Driver" (1976) she was nominated for her first Oscar.  Her films include "Silence of the Lambs" (1991), "Sommersby" (1993), "Maverick" (1994), "Anna and the King" (1999),  "A Very Long Engagement" (French 2004) "Inside Man" (2006) and "Elysium" (2013).  She has also directed and produced a number of films.  She spoke fluent French, but ironically another character in "The Mauritanian" had been asked to translate a French document.

Of course it took many other actors and crew members assembled for this presentation.

The rule of law is one of the necessities for civilization.  There will always be rule breakers and evil doers.  It will often be difficult to sort out complications fairly.  Unfairness causes resentments and disobedience.  Americans (for that matter Westerners) do not really understand their complicity in the resentments felt by Arabs and Muslims.  Through ignorance and greed, much undeserved suffering was inflicted.  Respect for the rule of law cold mitigate much of this suffering.  If "The Mauritanian" can help in this cause it is well worth it.