Live Up to your name 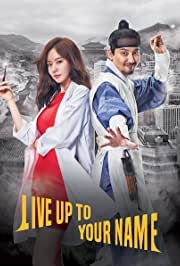 It was not my intention to blabber on about another Korean mini-series, but it is so easy to find interesting ones.  "Live up to your name" is different.  It involves time travel a little differently and in this case is well done.  It also involves acupuncture which had never drawn much attention.  In modern Seoul, Korea the real Dr. Heo Im had written texts that were still considered masterpieces for acupuncture, but in the series Dr. Heo goes back and forth between the two times and appears as a man with human frailities and I don't recall him settling down to write his experience.  There are character changes that seem natural and commendable.

With those elements it was not hard to find an interesting, captivating story.  The essential story is a man from a poor background who becomes an expert in acupuncture 400 years ago.  Somehow (we later figure out he has to die first) he finds himself in modern Korea and of course mystified by all the strange happenings.  Soon he proves himself as having superior medical skills, but not modern. As an acupuncturist in mediavel Korea he was respected by patients, but poor, while higher class people snubbed him until they needed his skills. There are lots of miraculous cures, but also social and political intrigues

Of course there is romantic interest, although it takes quite awhile to develop.  She is a modern doctor skilled in open heart surgery and we learn with a grandfather who is a traditional acupuncturist.  To complicate things there is a modern acupuncture clinic and one of the men there is also pursuing the heroinne.  The grandfather has a interesting and relevant history.

If you watch a lot of medical tv. shows and movies you will not be disturbed with stitching, or needle penetrations or open heart surgery, but if not, you might need once in awhile to steel yourself.  It really is amazing.  Along the way with many medical stories there are moral dilemmas.  There is a twist ending.

Perhaps some of you are more familiar with acupuncture than me, but how they showed it was revealing for me.  We see all sorts of pins being inserted into various parts of the body, but more interesting they show animated views on the under side of the skin.  We learn that in fact the hero had written medical texts that were still being used in modern times.  They don't claim to deal with every malady, but do cover a lot of interesting ones.

Jong-Chan Hong was the director and has worked in the television series business for a few years.

Eun-hee Kim wrote the script which actually was a year after another time travel series, "The Signal"  2016) that differed mainly as there was only 15 years difference between the two eras and each change in the past had immediate repercussions in the future.   Check http://www.therealjohndavidson.com/2021/05/frequency-and-its-extended-korean-remake.html for more details.   He had two national awards for that series.

Nam-gil Kim plays the lead character who adjusts from living in medieval Korea that comes under attack by Japanese and into the modern world where his skills are at first overshadowed by modern medicine including open heart surgery.  He swings between serious mode to happy go lucky and few moods in between.  Nam-gil has won national awards.

Kim Ah-Jung was in "200 pounds beauty" in which she played a singer who was overweight as a hidden backup for an attractive women who was a terrible singer.  Through some interesting interventions she is missing for a year and loses a lot of weight and has a few more adjustments to make her more attractive.  She is very shy about singing in public, but she is terrific.   She did her own singing, one of the numbers is a frequently played on my iTunes.   She is very charming in "Live up to Your name."

Unable to find out who wrote the music, but bought one item.

Another English version of the title is "Live up to Your name, Dr. Heo."  I interpret this to mean when he came to the modern world he had a reputation to live up to as some characters had access to a book of his, but in fact he had not yet written any of the documents that he became famous for.  Acupuncture is not so much explained as demonstrated.