Frequency and its extended Korean remake 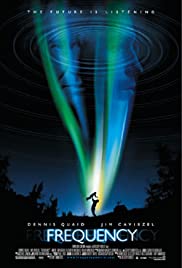 Do you ever wonder how your life could have been better or worse, if one little detail had changed?  As someone who has delved into my family history it has always struck me the overwhelming details that had to fall in place for me to be me, right here, right now.  That sort of notion begs for science fiction speculation.  Time travel is a popular theme in movies as we are all curious about how the past affects the present and about the future.  Two film projects have replaced personal time travel with communicating across time to change details.

Two decades ago I watched "Frequency" (2000) and enjoyed the interplay between past and present with a murder mystery.  The science fiction tool of travel has been done in many movies, but communicating only with somebody in the past and using information to change the past just seemed intriguing.  It was not forgotten.  After recently watching "Signal" (2016) an enjoyable Korean mini series I decided to re-watch "Frequency."

The Father, Frank who died when son was very young contacts his adult son John 30 years later. which surprises both of them.   We are not so much given an explanation, but a suggestion that an Aurora Borealis might have something to do with it.  Credibility is built a bit knowing the outcome of a World Series game, called son (himself) "chief"and even more when his father follows the son's instructions how to avoid his death.  After this success John has a dream that reconstructs his new history with his father.  We learn later that the father did die a few years later from lung cancer, however John persuades his father to give up smoking and he survives.  I like the anti smoking message; read more  http://www.therealjohndavidson.com/2015/06/smoking-and-movies.html

Then John learns his mother was murdered, but not all the details.   He instructs dad what to look for and after a false lead does succeed.  All this time we are watching family photos with some people disappearing and later re-appearing.  The decor of the house changes even more frequently.

Some comic relief comes when John talks to his younger self and his mother, 30 years younger without giving it away.  An interesting technical and dramatic feat is when simultaneously we view an attack by Shawn Doyle, the murderer to father in the past and to the son in the present.  Shawn is killed in one scene and disappears in the other making the point the past sets the future.

An interesting sideline is the friendship between two generations of firemen with police springing through recreational baseball games.  John grows up playing with Satch who later work together as cops.  There is a theme tied into friendship and family.

The writer and producer, Toby Emerich was nominated for awards for the script.  Ironically he wrote the script in 1994, but no one accepted.  He also admits that the delay allowed to be the producer.  He went onto to write 13 episodes of tv series with the same title in 2016.  I have not seen it, but understand it was more extensive and switched the main characters to a daughter and same father.  John described  this film as science fantasy.  He also produced "Butterfly Effect"  (2004)with more tampering with reality.

John Caviezel played son, John Sullivan who went on to become a policeman.   Acting in films since 1991 including "Pay it Forward" (2000).

Elizabeth Mitchell played mother, Julie Sullivan who was a nurse.  She was murdered, then saved and made it to the current time.  One of her many roles was with the long running series. "Lost."

Shawn Doyle plays a key crooked police/murderer  in both the past and future.  Shawn picked up role from Toronto when casting failed to fill the role from New York.  Saw him in 'Sabah" (2005) as the lead male.  Also appeared in "House of Cards" (2015)  Republic of Doyle (2010-2014) as the lead set in his native Newfoundland.

In the poster above the emphasis is on a father and a young son which is an underlying theme of the film. 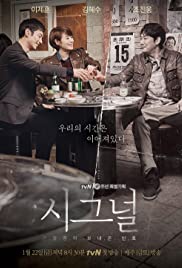 The Korean version, "Signal" was partially based on actual Korean crimes,  and tied to a more complicated plot which required some actors to play a younger version of themselves.  The plot is cleverly layered with linkages slowly revealed.  One difference is that there is a 15 year gap between the past and the present.

Eun-hee Kim wrote the script which won him two national awards.   He has written television scripts from 2002 until current times.

Won Suk Kim directed this series.  He has also directed a favorite of mine, "My Mister" (2018).  http://www.therealjohndavidson.com/2021/01/my-mister-is-slow-drama-with-emotional.html

Mohammad Omar Faruk is also listed as director and writer, but he is difficult to pin down.   He is from Bangladesh where apparently he was big on Youtube.  He is also credited with writing and directing in French films.  I suspect he has written source material that has been picked up by by film makers.

Lee Jehoon played the main protagonist as a profiler with the police department.  An award winning actor, also appeared in "Finding Mr. Destiny" (2010).

Kim Hye-su played a police leader who we learn was a naive klutz, but developed into an effective police officer who still yearned for her first mentor. I had seen in her in two previous films.  In "Hyena" (2020) she played a crafty, lawyer significantly older than another lawyer attracted to her.   The difference in appearance was stunning and her acting even more appreciated.

A mini series is more engaging and the Koreans have mastered how to build and maintain tension.  Koreans are experts at romance stories and this one has an unrequited romance that ties into the main story.  Of course in both films there are people who are very suspicious of where the information is coming from and the viewer is given a vicarious pleasure of being in the know.

I would accept Toby Emmerich's term "science fantasy" as there is little pretense of scientific fact for the main dramatic tool.  To work the fantasy has to be consistent, but also flexible.  He commented that he prefers his viewers approach the movie with no expectations that might come from trailers or reviews.    i have mixed feelings involving not only viewers, but investors:  http://www.therealjohndavidson.com/2012/09/predictability-and-enjoyment-of-movies.html   The shock of the unexpected can leave a positive enjoyable memory on one hand, the disappointment of an unmet expectation and the advantage of selecting from a multitude of choices are weighed against one another.

You can't change the past.  Maybe instead of trying to do so we need to understand and appreciate it. In effect the main protagonists in both films are playing God.  Learn to live for the moment.

In the poster you can see the three main characters, but if you look closely you will notice that the man on the right has a different background.

As usual I have bolded films I have seen.