Taxation: a Necessary tool for civiliziation 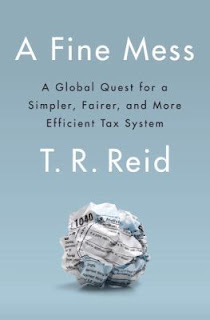 Complaining about taxes is universal.  It is more than just the money with our distaste extending to calculating and filling our forms.  This book deals primarily with the American tax system, but with many references to systems including Canada, New Zealand, France, United Kingdom, Netherlands, etc.

T.R. Reid and many others consider the American taxation system is a "mess" and in the book he explores the world to determine a better system.   A quote from Bill Bradley, "You can't just tinker.  Facing a huge almost incomprehensible system.  You have to take it on.  Your goal has to be to fix the whole damn thing."

Why are taxes necessary?  Many nations do not tax, or tax relatively lightly.  Oil rich countries in the Middle East get enough revenue from selling national resources.  Small countries with strong tourism (eg. Monaco) squeeze money out of visitors.  Some countries in earlier times just commandeered essential products.  The need to tax is lightened when money can be borrowed or be printed.  Taxes are said to be the "price of civilization"  http://www.therealjohndavidson.com/2012/07/price-of-civilization-book-review.html

The ideal in trying to fix "the whole damn thing" is to follow BBLR which stands for broader base, lower rates.  There are so many exemptions, deductions and other complications that merely removing some of them would allow for lower rates.  Governments are likely to need more revenues in the future as they take over more functions so it becomes a complicated issue.

An example I have some personal knowledge of, from New Zealand.  Their sales tax (VAT) is on pretty much everything and is kept low with less disruption to retailers.  For income tax they have done away with exemptions popular elsewhere, but in fact allows a lower rate.

The United States under the guidance of Ronald Reagan and Tip O'Neil agreed on a taxation system very similar.  Actually the details were worked on by Bill Bradley, Senator from New Jersey and others.  I knew him as a New York Knick, who had been a Rhodes Scholar and more personally had responded to a letter I wrote him regarding a research project.

Deductions are protected by vested interests, but are often not as effective as claimed and hurt the system.  Many are meant to encourage good behavior.

Mortgage interest deductions favor those with money.  Charities have proved to be resilient and would benefit from less need for govt. rules.   Electric cars, although a worthy objective do not justify $7,500 credit on $100,000 cost.

Inequality has gained a greater focus as it has been increasing in most western nations.   Read more here:  http://www.therealjohndavidson.com/2014/10/capital-in-twenty-first-century.html   The flat tax is usually promoted by wealthy people with the benefit that it is simpler.  In effect the rich pay less and the middle class pays more.  Thomas Piketty advocated a wealth tax as the best remedy to even up the classes, but admitted there would be resistance.

The estate tax may be the best tool against inequality.  Termed a "death tax" by right wing critics is in fact a tax on the living.  Most people, say 80% need not be subject to it.  It should be progressive with the idea is partly to optimize revenue, but also "spread the wealth" that so upset Joe the Plumber.--education is another equality leveller and perhaps a percentage can be earmarked

T. R. Reid brings up many examples of resisters.  Gerard Depardieu, a big French cinema actor and producer who was so fed up with his high rates that he denounced his citizenship and moved just over the border to Belgium.  Apple and Google among many others have discovered ways to transfer their income to lower tax regimes.  Recently Janet Yellin has revived an effort to co-ordinate international efforts to thwart the drive to the bottom of taxes.

Corporation taxes have been a good source of revenue, but they have also attracted a lot of abuse.  Ideally they should be abolished, but that could only happen if the money could be replaced with another source.  It seems to me that corporation taxes are thought of as an expense that can be passed onto a customer.  That suggests to me  that a VAT (value added tax) would be one source.

One of the concerns of VAT is that they are regressive.  That can be dealt with income tax rates that would be more lenient for lower income earners.  Another concern of some critics is that VAT are not usually stated.  Here in Canada we are told the GST amount making us conscious of the tax, but also annoying us with an extra calculation required before our purchase decision.  VAT advocates feel that hidden, most people do not notice and it can be raised while drawing little attention.  The taxpayer really should know.

In the U.S. there is a retail sales tax which is applied only once  In Canada and over 150 countries there is a Value Added Tax.  I remember when Canada was adopting a G.S.T. (a form of VAT) and there were many complaints.  I was in a position where I had to calculate pricing starting from the wholesale price that had a manufacturer's tax that was higher than the proposed new tax. What I didn't fully appreciate was the VAT process which applies to every stage of purchase starting with raw materials to any stage of manufacturing.  The GST rate would apply, but when the manufactured good moved to the next level which could be another manufacturer or a wholesaler the tax would be applied, but since they had already paid a tax that amount would be given as credit.  A couple of advantages ensued.  Each level paying the tax claimed a credit which became self enforcing.  The tax paid in smaller but more frequent installments was steadier.

Sin taxes have been effective in not only raising money, but also in discouraging harmful behavior.  The best example might be tobacco.  If totally successful the government would have to seek out. another source of revenue.  Health authorities are already suggesting sugar that causes obesity and diabetes.  After a few initial setbacks, sugar has successfully been taxed with one example being Mexico that has reduced diabetes as well as increased revenue.

Another commodity to be taxed would be carbon where done it has proved to cut use and raise funds.  There has been resistance as the public is inconvenienced.  Some of the inconvenience can be offset though tax credits as in Canada.

FAT stands for financial activities tax and can be so small to not be noticed.  One way of accumulating significant revenue while placating outcries about the very rich manipulators.

The Panama Papers were uncovered by German journalists in 2016 who not only maintained secrecy involved foreign journalists.  It was discovered that a legal firm, Monsack Fonseca was able to help redistribute large amounts of wealth to avoid taxation.  Some of their clients were Jackie Chan, Lionel Messi, and countless people close to prominent politicians.  The Joint International Tax Shelter and Collaboration Network took an interest and continues its crusade to prevent tax evasion through tax havens.

The world is changing in the sense that it requires fewer people to produce the goods and services needed.  This is a situation very easy for wealth to further concentrate.  One suggestion gaining momentum is a (universal) basic income.  How that could fit into a taxation system needs to be worked out.  To me the most logical way is to include it as income that can be taxed.

All income should be treated equally including wages, interest, dividends, basic income supplements and capital gains.  Concerns about the need for investments should be dealt with on the merits.

In the United States and Canada filling out the annual income tax form is time consuming and expensive.  Other countries have simplified the process.  For most people the information is readily accessible to the government and could be easily calculated with only a form requiring confirmation.

Simplified to not only make it easier to administer, but also hopefully that make personal and business decisions neutral.

Everything brought up is subject to discussion.  There are trade offs.  With the goal of simplicity and low rates, every change needs to challenged.  It can be pointed out for every item not liked there are other items that are desired.

A few earlier thoughts of taxes.

The job of a tax collector:  http://www.therealjohndavidson.com/2015/04/tax-collectors-dirty-job-frowned-upon.html

My experience as a tax preparer:  http://www.therealjohndavidson.com/2019/01/what-i-learned-as-tax-preparer.html