"Ahaan" An Adult with Down's Syndrome and an OCD partner 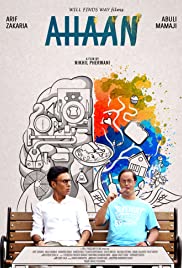 People with mental differences are making a mark in films.  Bollywood has taken its first film with a Downs Syndrome adult as its lead character.  Not only that, he helps an OCD  (Obsessive Compulsive Disorder) person reconcile with his wife.  This 80 minute film is about 50% English with the rest subtitled from Hindi.

Many of these films are comedies which some would think superficial and not really doing justice. That may be true to some extent, but comedies often make a point to a larger audience.  We are encouraged to laugh at some miscues and maybe learn the laughter hurts.  A greater understanding follows.

At the beginning we are introduced to Ahaan, 25 years old who has Down's Syndrome and seems cheerful.  We see him dressing himself, all set for the day.  Soon we are introduced to Ozzy brushing his teeth and after a shower with a scrub brush and being very meticulous with his hygiene.  We further see him lining up household items and being upset over being touched or food being slopped.  The link between the two men is Ozzy's wife Anu who is a customer of Ahaan's mother's brownie sideline business.  She is so enthused about Ahaan when he makes deliveries that she prepares some food items for him and offers to make some of her specialties such as chicken biryani ( a favorite of mine too).

Shortly after this we see Ozzy and Anu have a heated discussion where she is annoyed by his obsessive habits and especially by his putdown of Ahaan.  Shortly after we learn she has moved out of home and Ozzy is stunned.  He knows his mannerisms annoy her and he seeks help.  There is an amusing interlude with a psychologist who tries to expand Ozzy's world beyond his anxieties.  He gives him a pill which we assume must be to reduce anxiety, but really it is a laxative that will force Ozzy to use an unsanitary public toilet.  He then drags him through an uncomfortable crowded subway.  The psychologist suspects Ozzy is uncomfortable with physical intimacies with his wife who wants to have a child.

Ozzy craves his wife's food and figures out how he can use Ahaan to get some of his favorites.  Ahaan requests a special treat and shares it with Ozzy.  After awhile she catches on.  We are also learned Ahaan has greater ambitions that include a job and being more independent.  Anu and Ozzy reconcile over wanting to help Ahaan.  The couple contact a mother of a special needs child who did acheive independence.  Ahaan makes a date with another of his mother's customers who happens to be an H.R. manager that seems to go smoothingly.  The end is a bit ambiguous, but Ahaan seems a little further on his way to independence.

Nikhil Pherwani, wrote, directed and produced "Ahaan."  He had written, edited and handled the camera for a short in 2011.  More recently directed a television series.  Preparing for this movie he did research and talked with the star, Abuli to better understand the ambitions of someone with Down's Syndrome.  His brother Abhishek helped with the writing and producing.

Music by Dhruv Challa.  Was shot in Mumbai by Saket Gyani and Dipankar Sikder.  Edited by Anumpama Chabukswar and Jitendra Prakash Dongare.

Abuli Mamaji portrays Ahaan in only his second film.  He is cheerful throughout with just a few down moments. He is conscientious and helpful.

Arif Zakair plays Ozzy, the one with pronounced OCD symptoms who at first seems disgusted with Ahaan, then takes advantage of him and in the end becomes an advocate for him.  He has  been in a lot of interesting films including "Earth" (1998), "My Name is Khan" (2010), "Lootera" (2013)and "Raazi" (2018).

Niharika Singh plays Anu who is the most encouraging for Ahaan, but has had to deal with a difficult husband.  She appeared in "Miss Lovely" (2012).  She introduced a Diversity Film Training program for students from marginalized communities as a director in 2019.  She did not charge any fee to act in "Ahaan."

Plabita Borthakur plays a brownie customer who agrees to a date with  Ahaan turns out she is in H.R. i.e. human resources which reminds Ahaan he wants a real job.  Her first film was "PK" (2014) and later did "Lipstick Under My Burka" (2016).   More on "PK"  http://www.therealjohndavidson.com/2015/03/pk.html

The viewer sees the belittling attitude of most people and the resilience of a Down's Syndrome adult.  Maybe we will better understand they are humans that are able to contribute to society.

As usual I have bolded movies I have seen.