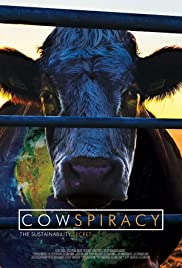 Depressing that one of my joys in life, eating meat puts more stress on the environment than fossil fuels.  The producer, Kip Andersen runs into opposition rapidly.  Green Peace would not talk to him and environmentalist mostly refused to concede any ground.  Some financing was withdrawn.  Animal activists are listed as terrorists and have suffered for it.  Warning if you watch this film you may be inclined to veganism, but that might be for the better not only for you, but for the world.

An undeniable truth is that people are starving while massive amounts of grain is fed to animals so those who can afford to eat meat, can do so.  Protein is available from plants, after all that is where animals get much of it.  A vegan requires about 10% of the land required to feed a meat eater.

One statement was that livestock was more harmful to the environment than all the exhaust from all vehicles in the world.  Environmentalists are well aware of resistance to tackling the fossil fuel industry and were very reluctant to take on agriculture interests (really the consumption desires of humans).

If the economic and environmental arguments don't soften your attitude a bit you can also witness the chopping off of a duck's head.  My wife's beloved grandmother used to kill a chicken by the neck for dinner  Film maker Kip decided rather than watch a chicken be slaughtered he bought one and turned it over to a sanctuary.

Bottom line I believe over population of people is the more basic problem.  Not only are there too many of us, the better off of us stress the environment the most.  If mankind is more successful in raising the standard of living for more people that is a multiplier.

I recognize I am addicted to meat, but have started considering alternative options.  Recently watched "The Hunt" and philosophically accept that life feeds on death.  Read more:  http://www.therealjohndavidson.com/2021/05/the-hunt-is-what-life-is-all-about.html  As we become more "civilized" we get softer and take a lot of things for granted.  Environmental concerns cannot be ignored and it is too self righteous to blame it all on fossil fuels while we ignore a bigger factor.  Methane does more damage than carbon dioxide, but breaks down much faster.

This may sound like an argument for veganism and the movie certainly is, but I prefer to think I am just presenting a worthy view that is too easy to ignore.   Vegans are healthier on the whole.  Cow's milk is a baby calf growth substance and not designed for humans.

Realizing the logic of a vegan lifestyle, entrepreneurs are developing alternative foods for meat and dairy products and some of them are likely to prosper as trends continue.   But to be honest it would be hard to break long established habits.

Kip Anderson and Keegan Kuhn teamed together to write, direct and produce this film.  Kip is the principle narrator while Keegan is the cinematographer.  They both have done other documentaries.

For a name you might recognize, Leonardo DiCaprio was the executive producer.  Yes, that big Hollywood star and Oscar winner likes to support liberal and environmental causes.

If we become more humane and environmentally sensitive what will we do with all the livestock?  http://www.therealjohndavidson.com/2018/01/what-happens-to-farm-animals-when.html

If you are interested in trying a practical vegan diet checkout this:  http://www.therealjohndavidson.com/2013/11/vb6-vegan-before-6.html