What happens to farm animals when humans convert to veganism 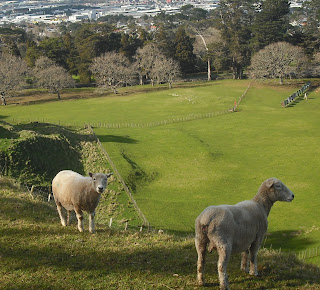 I am not a vegan or a vegetarian, but like some others have been consciously reducing my meat intake.  Why is that?  Health is a concern and veganism has lot to commend itself.  Animal cruelty bothers an increasingly urban population.  In addition livestock are a very significant contributor to global warming.

Economics will trump everything when the price of meat increases faster than average incomes.   Read about a partial vegan diet, http://www.therealjohndavidson.com/2013/11/vb6-vegan-before-6.html

Attitudes towards animals varies a great deal depending on whether you are urban or rural.  One of my jobs helped me appreciate the differences:   http://www.therealjohndavidson.com/2011/06/rural-and-urban-contrasts-towards-pets.html

The bigger trend has been as people do have more money they prefer to eat meat.  Flavor, prestige and protein all factor in.  Urbanization encourages sensitivity for animal cruelty while at the same time it also desensitizes citizens removed from their ancient farming history.

Industrial farming has found ways to breed more animals on less real estate and converting forest resources to farming which is increasingly for grains to feed animals.   We are not getting our calories and proteins in the most economically efficient way.  For the wealthy it doesn't matter, but increasingly for the rest of us it will matter.

Unless demographic trends and attitudes change it is inevitable that meat will eat up more of our financial resources and once again become a luxury item.  If we get better control over fossil fuel's contribution to climate change, someone is sure to notice that farm animals are a huge contributor.

What will we do with the excess number of pigs, cows, sheep, etc?  Working with pet people concerned about homeless cats I learned of  neutering programs.  Feral cats were captured, neutered and then released  We don't really want a lot of pigs and cows running around the streets, but possibly a few will be seen as pets.  There has also been a trend to stop animals being tested for chemicals and behavior.

There is much concern about over population in the world and that refers almost exclusively to humans.  We pollute, waste resources.  Throw in overpopulated animals and we have to find ways to control our finite resources.  Of course someone will pipe up and say as we need to we will find a way.

There will be a sort of war at a bacterial level.  Wild animals and pets and domestic farm animals have all played a role in human diseases.  Hunters are given an opportunity to kill animals when authorities determine there are too many.  When some diseases threaten to go epidemic authorities order killings on a large scale

Just throwing out some ideas about what is very likely to draw more attention in coming years.
Posted by John F Davidson at 3:28 PM