RURAL AND URBAN CONTRASTS TOWARDS PETS REVEALED BY BRUSHING TEETH 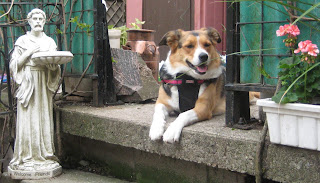 Admittedly I sell something a bit unusual; toothbrushes for dogs. The concept is still pretty new and very much a niche product. One interesting reaction was the difference in attitudes and practices between urban and rural areas.

When you are able to explain to a city dweller the health and economic advantages of brushing a dog's teeth, they seem to understand it. The problem for many of them is they feel very uncomfortable trying to brush their dog's teeth and don't have the patience to persist.

When you approach some people in a rural area they are very apt to start laughing. They cannot imagine why anybody would go to all that trouble.  Ironically many of them would feel fairly comfortable doing it and as a general rule they tend to be more patient.

At first I thought this contrast might reflect different levels of education, but I have concluded the explanation requires more digging.

In a rural area people who raise livestock have to detach themselves from being emotionally involved with their animals. This goes to some extent with work animals as well. It is not just a matter of money, it is a matter of survival. Any animal becomes replaceable.  If an animal is going to be sent to the slaughter house it is not a good idea to become attached to it. If a horse can't pull the load anymore you need to find another that can.

In urban areas our dogs and cats survive not by working, but endearing themselves to us.  We on the other hand are looking for something to fill a need. Children fufill that need to a large degree and ironically we often get pets to make our children happy and hopefully learn some responsibility. And lately for various reasons we tend to have fewer children and for many their pets help fill the void.   In my family we had been pet-less for over 5 years when my eldest daughter went off to university in the Maritimes.  It really was a coincidence that we got a cat.   A few years later our son went off to university, eventually to Vancouver Island and for the first time in our lives my wife and I both agreed to get a second cat. Perhaps another coincidence.

The point being that city folks, long removed from the farm that most of our ancestors worked on get very attached to our pets to the point they are considered part of the family. I had a job selling office supplies including to doctors, dentists and veterinarians. During an economic downturn I noticed that doctors didn't notice--they were getting their usual income through the government health insurance. Dentists did notice as without a job people did not have insurance for some dental work and it was a difficult decision.  One veterinarian said that when it came to small things most pet owners delayed action, but when it came to major surgeries pet owners were more inclined to go ahead; he felt that their pets became even more important in tough times.

Of course everything is changing and these attitudes are already going in different directions. Rural people do get attached to their pets.  Urban people are learning a hands on approach to maintain their pet's health.

Still I notice that many urban people take what I feel are the cheap hands off approach to dental care. they don't like bad breath, so they buy chemical additives. They hear diet affects the teeth so they adjust the diet. Younger people are more open to getting their hands yucky and doing what makes a greater difference, actually brushing the dog's teeth and learning there are other benefits.

I have spent most of my life living in a city, but spent two years of high school in a rural area. I also went to a university with a strong agricultural reputation where I learned to respect rural backgrounds. My reflections on this topic really come from hundreds of conversations with city, small town and rural retailers.

I will from time to time be writing about brushing dog's teeth as that is one of the things that pays my bills. Even if the idea seems ridiculous or uncomfortable to you, I hope you will bear with me as it can add years to your pet's life and life to your pet's years.

The photo is of my daughter, Heather's (with Sarah) dog Lexie in my backyard taken recently by Sharon Davidson.
Posted by John F Davidson at 10:27 AM