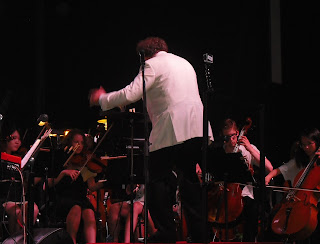 A little background. At my Grandmother's funeral my father thought it would be a great idea if I would grab all the family records and do a family tree. This was a short time after "Roots" had its tv run. I had not thought of that, but unknown to my father my wife was pregnant with our first child and that gave me another motive.

I enjoyed the process a lot more than I expected. At some point I realized that my now newborn daughter had another side of her family. Part of that family was Italian. I anticipated having to go through Italian records and decided to learn Italian. As part of the process I thought I would take in a little culture and developed an interest in modern popular Italian music.

One day I came into work a little earlier than usual and our secretary, Rheta Cornish at the Etobicoke Guardian was playing some classical music on the radio and apologized if it offended me. Actually I easily accepted classical music, but couldn't help uttering, "But I can't stand opera."

It turned out that offended her, but she didn't show it. Merely uttered that it was her favorite. At that exact moment I realized that a lot of opera was Italian and maybe I should give it some consideration. I got to talking to Rheta about it and she made a suggestion or two. I decided to get some tapes at the library near where I worked in Etobicoke and put them on while driving (I commuted from Hamilton to Toronto and quite a bit on the job). Every now and then I would hear something quite enjoyable between parts that mostly bored me.

I mentioned this to Rheta and she explained that was normal, but that after awhile I would appreciate the parts in between. I reached the stage where I listened to more and more operas and read about them and even attended a few. At another stage I realized that opera was sung in many different languages and although my favorites are Italian I came to appreciate German, French and other languages. I never did master Italian, but did realize Italians have given the rest of us a lot of culture from music, cuisine and style.

You've waited long enough--the Wayne Gretzky connection is Rheta. I am pretty certain Wayne got to hear a lot of opera and classical music and Rheta's opinions as he lived with her for a year or two while he pursued his hockey career. At one time Wayne's parents had decided that Wayne needed a higher level of competition than he could get in Brantford. They knew Bill Cornish was a president in Toronto Minor Hockey and got to know him as a very trustworthy person who eventually agreed to be a guardian of Wayne.

A few years later, Rheta and Bill also took Wayne's sister into her home while she attended a community college. When Wayne had his big wedding Rheta was invited. Over a few years I got to know Rheta whose interests and connections went from hockey to music. Her son, Bill Jr was the funniest co-worker I ever had. I knew Bill Sr at a distance, but realized he also shared an interest in classical music. I was caught off guard phoning Bill Sr to learn Rheta had died. I will always remember her for getting me interested in opera which I still think is the highest art (except for a film version of opera).

Rheta got me at the right time, not only with my interest in Italian culture, but also my interest in dramatic music. As a youngster I loved to watch the big musicals on tv. South Pacific, Flower Drum Song, State Fair, Carousel and Cabaret are some that I remember. In a dramatic context the music was more emotional. You felt happy that the boy and girl were getting together and sad that things weren't working out. You could feel patriotic. The song by itself could evoke some of these emotions, but not as much as if the context could be remembered.

If you have never liked opera before don't expect to fall in love right away, but if you are open minded about it the effort is worth it. I once heard Wayne talk on the radio about his support for the National Ballet Company of Canada.
Posted by John F Davidson at 5:00 PM