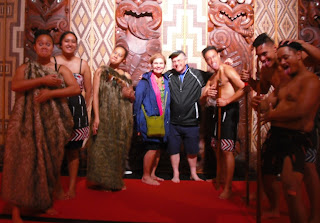 During my vacation in New Zealand Canada has been undergoing a cold spell as well as a lot of snow.  I am wearing shorts as I write this, because I would look pretty foolish in long pants. This is not just in resort areas, but downtown Auckland..

The first two days of the year most businesses are shut down.  We explored a number of sites in Auckland.  Right near our son's residence is Mt Wellington which you can drive up about 2/3 of the way where they have created a parking lot in the crater.  We climbed a little higher and got a view.  Met a visitor from Cape Town, South Africa.  We visited the Michael J Savage Memorial which we had last seen in winter.  We visited a rose garden and then the Winter Gardens.  A visit to a Chinese restaurant, Cafe BBQ Duck with the fastest service and good food.  Checked out downtown and to the waterfront.  Western Springs is one of my favorite spots with a variety of birds.  Eels might not be thought of with anything less than squirmy feelings, but visitors feed them and enjoy watching them. 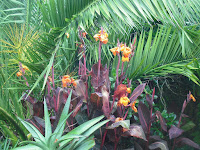 A trip to Hamilton, New Zealand was originally planned as a sort of namesake exploration, however attempts to find a T shirt with Hamilton on it failed and I settled for a hat.  On the plus side we took more photos at the Hamilton Gardens than at any other venue on the whole trip.  We ate at Iguana.  On a Side trip to Pokeno found the best ice cream deal.

Our trip furthest up north on New Zealand ended at Paihia.  Walked by a used book store and found a long sought for book in Whangerei at The Piggery.  Another interesting restaurant--Shiraz--also bought some sweets including ladoo which I only heard of from the movie "English Vlingish," but found delicious.

A bucket list item was to attend a Maori ceremony and hangi.  Rain threatened to spoil the fun, but in the end it was even better.  Mr Busby entertained us with  a tour of the Waitangi Treaty Grounds and later for the hangi feast.  Two performances were great.  There was a lot of rain and also a power failure, but it was handled very well.  The second half of the second concert was performed in the eating area with an inspiring song to end.  The photo at the top is the two of us posing with some of the performers.  We were urged to talk to strangers and had good conversations with a couple from Perth, Australia and another from Germany.  The original treaty was signed and enforced under deception, but in fact the Maoris were seeking protection from other foreign nations and wanted to boost trade.  The British were not too concerned that not all chiefs signed as they felt they only needed a few to claim sovereignty.

We stayed in Paihia for only one night, but at a great motel--Admiral's View Motel.   The next day was rainy and blustery and we had to cancel our cruise.  Weather has been kind to us, but any traveler risks having the weather intervene.  We could be home shoveling snow.

Back to our Auckland base we ended up with a new experience for us at the Genghis Khan Mongolian BBQ Buffet.  Many of my readers have probably had a similar experience, but if you haven't look for one nearby.  You get to select from a wide variety of items to be stir fried.  The one we visited was in Manukau City. A train ride into downtown Auckland leads to a most entertaining walk up and down Queen St which could be favorably compared to Toronto's Yonge St.

The Maritime Museum gave a history of boats from the Maori migrations to New Zealand winning the America's Cup.  Large (and small) boats on display.  Saturday night at the Pakuranga Mall was quite the experience.  More packed than the previous Saturday.  This time had Malaysian street food and a Japanese crepe.

We were told to get up early Sunday morning and that there was a restaurant reservation for 1:00 pm.  We guessed wrong.  First stop was strawberry picking.  Next we spent time at a reserve in Muriwai where we were mesmerized with a colony of gannets that seemed to soar on unique air currents. A para sailor was inspired and amazed us with how high he could sail in the wind.

The 1:00 reservation was another unique restaurant experience.  At Sun World Chinese Restaurant in Newmarket, an Auckland suburb carts were brought around to a table and you chose which items to eat.  I am not sure of every delicious thing I ate, but for the first time I tried chicken feet which were enjoyable.  This was Hayley's gift, telling us she remembered her grandparents liked to dine like this on Sundays.  She did the ordering in Chinese while checking for any preferences.

Afterwards we visited Mt Eden and later One Tree Hill with spectacular views.  They remind us that Auckland is built on volcanoes.

One of our holiday habits is to eat mostly at restaurants and for dinner we chose a Mexican restaurant called Mexico at the Sylvia Park Mall and afterwards took in a movie.  We were still full from dinner and I had been told that Mexican restaurants in New Zealand were not really very Mexican, but we were all pleased. 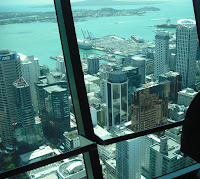 On our last full day in Auckland Michael delivered on his Christmas present which was a dinner at the Sky City Tower restaurant, Orbit.  Heights frighten me, but the view was terrific. The Sky City Tower is not nearly as tall as the CN Tower, but it has one feature that attracts attention:  Jumpers.  We saw about 3 while we were there, but only for about a second.  The food was among the best we ate anywhere, anytime.  Below the dining level we indulged in what is becoming a favorite ice cream flavour, feijoa-pear sorbet by Kapiti.

Last day still another new experience.  We were driven to Mt Eden and had a Chinese noodle dinner and after that we went to Huluku Bubble Tea where you were given the choice of various teas with various condiments-- I had a Mango slushy milk tea with lychee jelly--wonderful.

My favorite restaurants tend to be Asian and New Zealand has more than its share.  That means I got to practice my chop stick technique.  Still pretty crude, but I make it work although it does also help slow down my fast eating.

The feijoa fruit has become a new obsession for me.  Apparently the actual fruit is only available for a limited time and I have missed that limited time on both my trips.  In the meantime I have eaten it as an ingredient in cereal, drinks, pastry, sorbet (really distinctively good) and even a sparkling wine.

Reading has always been an important part of my vacations.  I finished a Jane Austen book, "Northanger Abbey" and then bought "See you In September' by Charity Norman and while waiting for some other books started "The Husband's Secret," by Liane Moriarty.   After picking up two more Charity Norman books I started "Freeing Grace."  More on my new author discovery:  http://www.therealjohndavidson.com/2018/02/charity-norman-discovery.html

Traveling back and forth across 18 (or is it 16 depending on who is on daylight savings) time zones, as well as changing hemispheres is energy draining.  Actually watched the Toronto Raptors live on tv win in overtime before leaving for the Auckland airport.  The trip home seemed drudgery, but not without movies, some interesting conversations, some reading.  Our shuttle driver Caesar was back with his sense of humor.  Apparently he had been away almost as long as us and missed most of the really bad weather.

Now back to reality, but with a lot of good memories and souvenirs.  My favorite souvenirs are the photos.